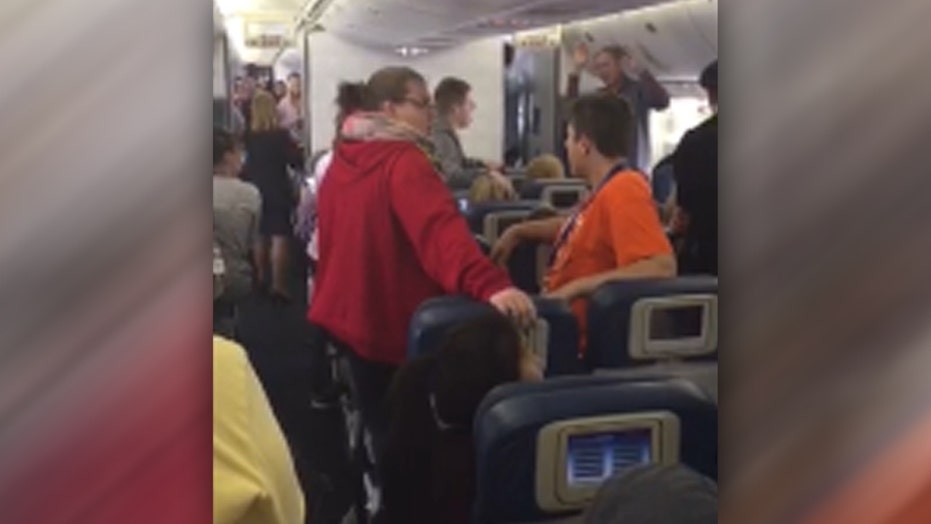 Raw video: Group of students from Wartburg College sing 'Battle Hymn of the Republic' after pilot announced remains of WWII soldier were being escorted off plane

After back-to-back weeks of bickering and bloviating, I’m about all politicked out.

So the other day, I sent a message to our good readers that I was searching for stories to share that would inspire, not inflame.  Soon, my in box was flooded with great stories from across the fruited plain.

But one, in particular stood out.

So pour yourself a glass of sweet tea, settle back into your Cracker Barrel rocking chair, and prepare to have your bones blessed.

On board were dozens of teenage musicians – members of the Iowa Ambassadors of Music. They had just completed a European tour and were returning home.

Also on board was a soldier – in full dress uniform. The young man was escorting the remains of a World War II veteran.

It just so happened to be that one of the flight attendants was seated across from Dr. Lee Nelson, the singing group’s choral director and the director of choral activities at Wartburg College.

During the long flight across the Atlantic, she mentioned to the director about the fallen soldier – and how an Honor Guard would meet the plane once they landed in Atlanta.

“She asked if there was something that perhaps we could sing,” Dr. Nelson told me during a telephone interview from his office at Wartburg College.

By chance, the choir had concluded all of their European concerts with a moving rendition of the “Battle Hymn of the Republic.”

“I thought that might be something appropriate to sing to honor and respect the remains of that soldier and also the uniformed soldier,” he said.

But organizing a choral concert on a plane is not all that easy – especially since the students were scattered through the giant aircraft. So Dr. Nelson enlisted the aid of a chaperone and they stood back to back so they could direct both halves of the plane.

As the Honor Guard approached the jetliner and the soldier rose from his seat, the teenagers began singing, “Glory, Glory, Hallelujah…”

Young American boys and girls from places like Des Moines and Waverly and Iowa City – sang with all their might in four part harmony. And the entire moment was captured on video.

“It was an emotional moment,” Dr. Nelson said. “The flight attendants had tears in their eyes – and so did the directors.”

And the moment also proved to be a life lesson for the young Iowans.

“The idea of the power of music – and the idea that it’s not just a performance, but that we get to use music in the way it’s intended to be used – to show love and respect for all,” he said.

He noticed that the decorum of the students changed almost immediately.

“They were very respectful and honored to be able to sing in this sort of context,” he said. “It really hit home to the hearts and minds of the students and everyone on board that plane.”

“It was truly a beautiful moment,” Dr. Nelson said.

And so it was on Delta Airlines Flight 15 that the sons and daughters of Iowa rose with one voice to bid farewell to a fallen hero – returned to the land of the free and the home of the brave.

It was a uniquely American moment. Glory hallelujah, indeed.