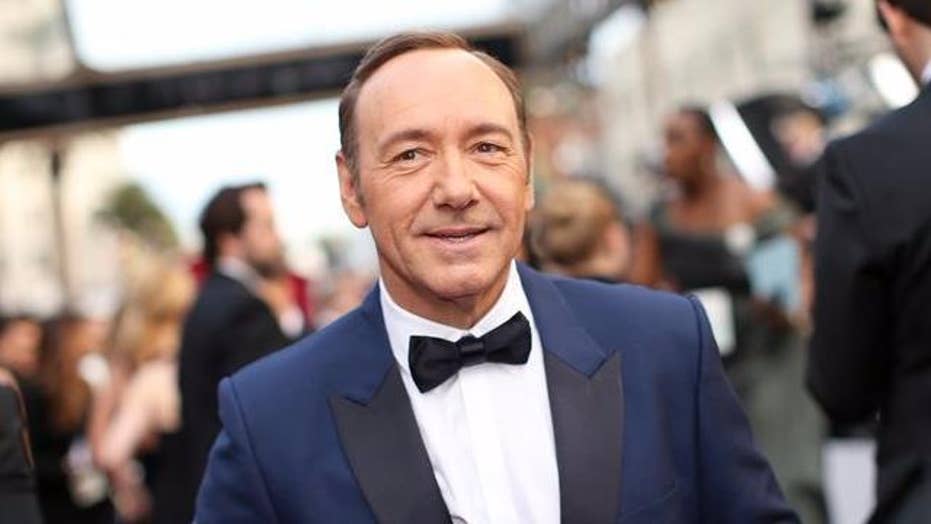 Spacey comes out to distract from sex harass scandal

Actor is accused of preying on then-14-year-old actor, doesn't remember encounter and then comes out as gay. Did the media fall for distraction away from the real story? #Tucker

The Hollywood/Media volcano is still spewing out its garbage. First, movie mogul Harvey Weinstein, then newsman wunderkind Mark Halperin, and now the thespian’s thespian Kevin Spacey face a spotlight even they don’t like. Three men from industries that control our culture, bullies and lecturers all, allegedly grabbing and groping whatever vulnerable woman, man or child might have the bad luck of catching their eye. Depending on their predilection, of course.

So we get another week and another Hollywood chorus of “everyone knew.” This time, actor Kevin Spacey was caught when the light turned on. Another actor, now in his 40s, alleges how 30 years ago, the actor and star of Netflix’s “House of Cards,” physically restrained the then-14-year-old and attempted to pressure him into sex. Mr. Spacey was 26 at the time, and both were starring in Broadway plays.

Mr. Spacey claims he has no memory of the incident, but issued an apology and claimed if it did happen it was because he was drunk.

February 13, 2014. Cast member Kevin Spacey poses at the premiere for the second season of the television series "House of Cards" in Los Angeles. (REUTERS)

That didn’t impress comedian Rosie O’Donnell. She tweeted to Mr. Spacey on Monday, “u don’t remember the incident — 30 years ago? — [expletive] u kevin — like Harvey we all knew about u — I hope more men come forward.”

Mr. Spacey shares something else with Mr. Weinstein and the Hollywood where “everyone knows” about predators in their midst but accepts it: He’s a liberal and loathes Donald Trump.

In a perfect example of the liberal problem of projection, in May 2016, Mr. Spacey was entertaining at an AIDS benefit in Cannes when he declared then-candidate Donald Trump as something less than human.

The Guardian reported, “Kevin Spacey has laid into Donald Trump during a standup routine at the Cannes Film Festival, calling the Republican presidential hopeful a ‘disease.’ Performing at an event to raise money for AIDS charities, Spacey opened his routine dressed as the late talk show host Johnny Carson. He told the audience that regular host, Sharon Stone, was unable to make it because she was fighting a disease, adding: ‘The name of the disease is Donald Trump.’"

Says the man who, it is alleged, has assaulted numerous young people, including the “loved one” of a news reporter, and as the Daily Mail also reports, “Another friend of a victim, Nadine West, came forward on Monday to claim that a young man close to her was ‘groped’ by Spacey while working alongside the actor at the Old Vic in London.”

Alas, filmmakers, actors and journalists, it turns out we hardly knew ye. We were told you were our moral betters; the arbiters of right and wrong. Only you had the insight to instruct us, the savage and dumb, in the more civilized ways of the world. Only you, with your red carpets, fame, millions of dollars, and cameras pointed at your faces, could be trusted to know what was best for all us rubes.

Poor Roman Polanski, he was unique for a while. For so long the film industry made it seem as though he was an outlier, the only one in Hollywood who would victimize someone, let alone do a horrible thing to a child. Yet we must assume he, and everyone else, knew full well he was part of a club. His crime was that he was caught. So, out damned spot, out, they said.

But victims of Hollywood predators kept piling up, children grew up, and the internet gave those who were previously marginalized a way to speak up. Twitter has been a key communication vehicle for many.

In what was considered the first major Hollywood scandal, silent movie comedian Fatty Arbuckle was accused of rape and murder of actress Virginia Rappe. In September 1921, hotel guests heard a screaming Ms. Rappe, and rushed to her rescue.

The BBC reports, “Among the guests was Virginia Rappe, a 30-year-old struggling actress. … At some point, Arbuckle and Rappe ended up together in a bedroom from where, a few minutes later, her screams were heard.

“Guests rushed in to find Rappe, fully dressed, writhing in pain on the bed. Arbuckle told them — it was a story he always stuck to — that he had gone to use the bathroom where he found Rappe in a drunken faint on the floor. He had merely carried her to the bed and she had fallen off, insisted Arbuckle.

“But then Rappe uttered the words that would damn the star: ‘He did this to me.’"

Rappe died a day later of a ruptured bladder. Many believed the morbidly obese Arbuckle had injured her while attempting to rape her. He was ultimately acquitted, but shunned by the industry.

These stories about the powerful in Hollywood aren’t new, and it’s not about being straight or gay. After all, sexual harassment, assault and rape have nothing to do with sexual attraction or desire, and everything to do with humiliation and control, whether it be of adults or children. Up until now, the entertainment industries where the powerful control not just someone’s job, but their dreams and future, protected itself with enforced silence.

Men like Harvey Weinstein, Kevin Spacey and Mark Halperin are low-hanging fruit, the ones, we’re told, “everyone knows.” It’s time the “entertainment” industry finally stops projecting its issues and displacing its rage onto political opponents and focus on its own rancid house.