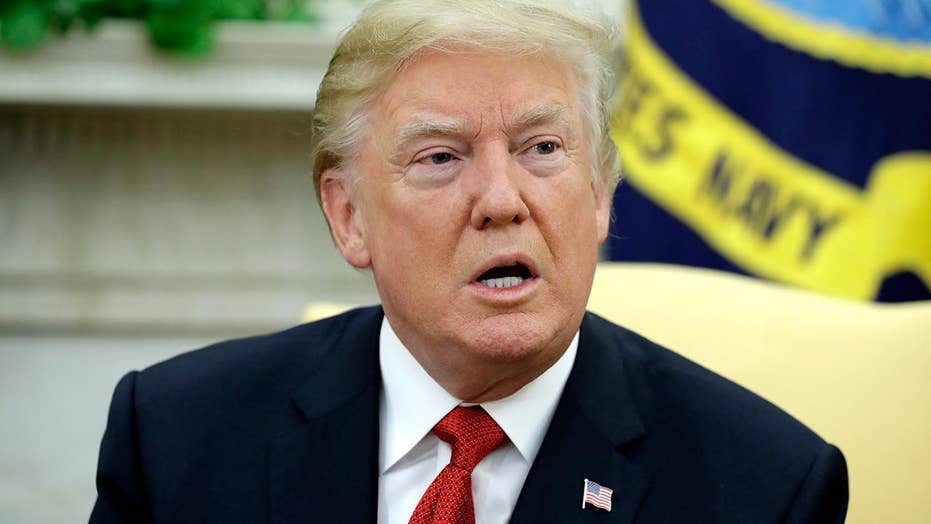 Is Trump's plan enough to win over American taxpayers?

Fox News contributor Karl Rove breaks down the numbers on 'The Story.'

How do you know when the liberal media meltdown is approaching an apex? Just look for apples, bananas and a strong smell of smug.

Reaching deep in their drawer of smug, CNN unleashed a “Facts First” initiative, starting with an ad featuring an apple, with a voice-over warning viewers that some awful, yet unnamed, person or network is trying to convince you the apple is a banana. While a juvenile attempt to discredit President Trump’s complaints about the network’s shoddy news coverage, they manage only to remind us of why they’re in this fix in the first place.

What CNN reveals with this abject sanctimony is their contempt for the viewers themselves. “This is an apple. Some people might try to tell you that it’s a banana. They might scream banana, banana, banana, over and over and over again. They might put BANANA in all caps. You might even start to believe that this is a banana. But it’s not. This is an apple.” And then the words “Facts First” appear on screen.

This is 30 seconds of CNN condescendingly treating news consumers as idiots, unable to judge for themselves. Think about this: Someone at CNN thought it would be a great idea to suggest people who don’t trust CNN are either brainwashed or just plain stupid.

Think about this: Someone at CNN thought it would be a great idea to suggest people who don’t trust CNN are either brainwashed or just plain stupid.

They must be feeling very, um, special right around now as sole possessors of the truth, as a Harris Poll in May found that 65 percent of voters feel that fake news in the mainstream news media is a big problem.

From May 2017, The Hill reported, “Nearly two-thirds of Americans say the mainstream press is full of fake news, a sentiment that is held by a majority of voters across the ideological spectrum. According to data from the latest Harvard-Harris poll … 65 percent of voters believe there is a lot of fake news in the mainstream media. That number includes 80 percent of Republicans, 60 percent of independents and 53 percent of Democrats.”

And why might Americans (including the president) consider CNN fake news?

Federalist: “CNN producer fesses up: We’re just doing the Russia stuff for ratings.” Referring to the Project Veritas undercover video of a CNN producer, they reported, “When asked if he thought the Russia collusion story was legitimate or all hype, [John] Bonifield said it’s ‘mostly [expletive] right now.’

” ‘Like we don’t have any big giant proof,’ he said. ‘I think the president is probably right to say, like, “Look, you are witch-hunting me. You have no smoking gun. You have no real proof.” ‘ “

That looks an awful lot like a banana, no?

The New York Times referred to CNN as having a “unique role as nemesis for Mr. Trump.” Really? Also The New York Times: “3 CNN journalists resign after retracted story on Trump ally.” A story with three reporters and one anonymous source. When the target of the hit piece, Anthony Scaramucci, threatened to sue, only then did the network retract and apologize.

I guess that’s what happens when you’re an official “nemesis” — your prize is a basket full of bananas.

And let’s not forget CNN hunting down and threatening a person on Reddit who created an anti-CNN WrestleMania gif, featuring President Trump wrestling a man (with a CNN logo head) to the ground. Yes, it was funny because it was a joke. Then CNN went … bananas.

The Hill reported on CNN’s bizarre reaction about the hunt for the person who dared to make fun of the network: “He is a private citizen who has issued an extensive statement of apology, showed his remorse by saying he has taken down all his offending posts and because he said he is not going to repeat this ugly behavior on social media again.” The story, titled “How CNN found the Reddit user behind the Trump wrestling GIF,” quotes from CNN.com: “CNN reserves the right to publish his identity should any of that change.”

And that’s how #CNNBlackmail began to trend on Twitter. A senior reporter at Vox tweeted, “I can’t emphasize how bad this is on CNN’s part. This is basically ‘don’t post stuff we don’t like or we’ll dox you.’ Extremely unethical.” To say the least.

The Federalist reminds us of another CNN banana: “A banana is when you run conspiracy-mongering pieces that assert Republicans want to make rape and domestic violence pre-existing conditions in their Obamacare repeal bill when there is not a single word or action that backs up the allegation.”

CNN’s history is replete with getting things wrong. And then a producer gets caught on a hidden camera admitting that he knows what they’re promoting is bunk. And then you have three high-value journalists resign because a major story is insupportable and has to be retracted.

This is what happens when you decide to call your crusade against a politician you don’t like “news.” Sorta like calling an apple a banana.