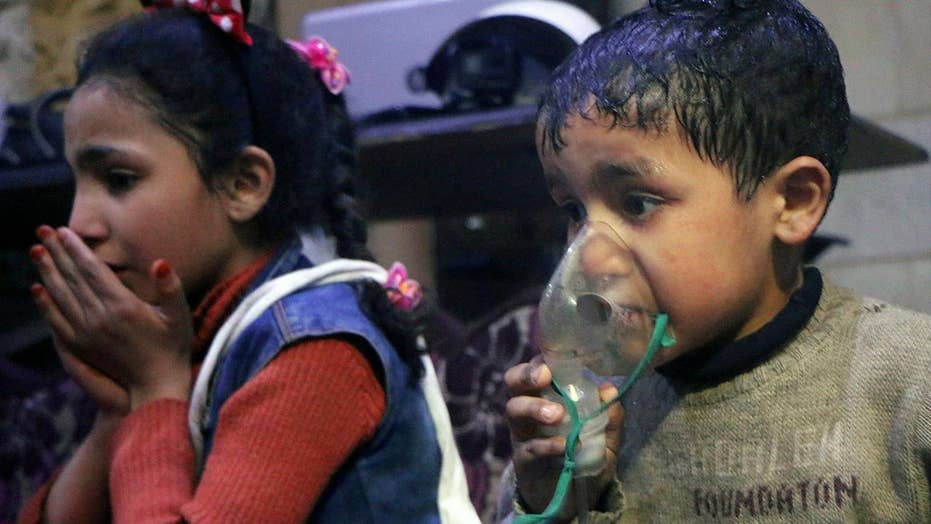 It seems that once again the world is waking up to a sad reality: scores of innocent people have been killed by a savage chemical weapons attack, almost certainly launched by the forces of Syrian dictator Bashar al Assad, financially and militarily backed by his overlords in Moscow.

And while the entire planet should condemn this in the strongest possible ways—and, if needed, destroy with military force Assad’s air assets, to ensure that he cannot continue slaughtering his own people—words and deeds are not enough.

For we must recognize a much bigger problem is now before us, one that could change not only how nations conduct modern warfare but also something that is an assault on our own collective sense of humanity. In fact, we are rapidly reaching a tipping point where the idea of using chemical weapons to achieve a goal in international politics is somehow becoming OK.

Take stock for a moment of how far we have come in the degradation of what seemed to be a “redline” in that no use of chemical weapons would ever be considered acceptable.

First, was Assad’s appalling use of chemical weapons during the Syrian Civil War back in 2013. Thanks to the widespread dissemination of images and video on social media, the world was given the most horrific of front row seats to a 21st century style massacre that spurred the world to action. With the Obama administration considering military action but eventually punting to Congress, a deal was struck in cooperation with Russia where Assad at least seemed to give up his chemical weapons. Unfortunately, it seems the butcher of Damascus did not cede all of his weapons, or has rebuilt his stocks—and has no fear of the repercussions for his actions.

We must ensure that Assad can’t build any more weapons of mass destruction. This means clamping down and making clear to any suppliers of the instruments of such technology or know-how – this means North Korea – will also pay a tough price for such actions.

But from here it gets worse. Other rogue nations around the world were watching—especially the thuggish regime in Pyongyang, and are now also using chemical weapons to achieve their aims. In an attack that could have killed scores of people, it seems clear North Korean intelligence was able to pull off a targeted assassination Kim Jong Un’s half-brother with VX, one of the world’s most lethal chemical weapons on the planet. And while two assassins seem to have been captured, the world did very little to push back against this action, which took place in public, at the Kuala Lumpur International Airport. For if something had gone wrong, many more people could have been killed, creating an international incident of the first magnitude.

Sadly, it seems current events only reinforce this dangerous trend—with the world’s great powers now getting in on the act. Just several weeks ago, it seemed clear that Russia conducted a targeted chemical weapons assassination on March 4th—on British soil no less—against an ex-Russian spy and his daughter. The attack, a blatant violation of international law and what could be interpreted as an act of war, is part of a pattern of Moscow’s ongoing campaign to target dissidents who have spoken out against the Putin regime, or those they feel constitute a threat.

While the trendlines are clearly disturbing, there are still some potential pathways to reverse this and put the chemical weapons genie back in the bottle—for good.

First, the Trump administration must push back in Syria against the idea that such actions are acceptable. While I am firmly against any deep military involvement—all the bombs in the world can’t put Syria back together again—a targeted strike to ensure Assad can’t use such weapons from the air might very well be needed, and could be planned as of right now. There are, however, some risks in this, as such a strike would need to make sure that we don’t kill Russian military advisers in the area, which would risk turning a regional civil war into a potential global—and nuclear—nightmare. Provided that can be done, it seems now is the time for to Assad be denied the use of such horrendous weapons—now.

Next, we must ensure that Assad can’t build any more weapons of mass destruction. This means clamping down and making clear to any suppliers of the instruments of such technology or know-how – this means North Korea – will also pay a tough price for such actions. No nation should be able to profit on the death of innocent people in such a barbaric way and expect to get away with it.

Third, and most important, Team Trump must lead an international effort to do all it can to end the civil war in Syria. America cannot and will not go further than Arab partners in the region, which means national like Saudi Arabia and our Gulf State partners, which have a clear national interest in this, must lead such efforts with peacekeepers on the ground as well as ponying up the financial resources to rebuild. But Washington can and must start the process, bring the warring parties together, and attempt to wind down what is the most disastrous conflict on our planet today.

Finally, nations around the world must make it clear that any use of chemical weapons for political assassination is unacceptable and will be met with the gravest of consequences. While Washington, the UK and the collective West have led a strong effort to push back against Russian actions, a clear warning needs to be made to Moscow, as well as Pyongyang, for their past actions. For if Russia specifically were ever to consider and conduct such another chemical attack on western soil, especially a NATO member, such an action could spur the invoking of Article 5 of the alliance—that a NATO member has been attacked and a collective response is needed. And while that does not necessarily mean war, it would mean that NATO would clearly consider Russia an enemy in every sense of the word, and seek to contain Moscow.

And we all know what happened to the old Soviet Empire when it was contained—it was crushed.