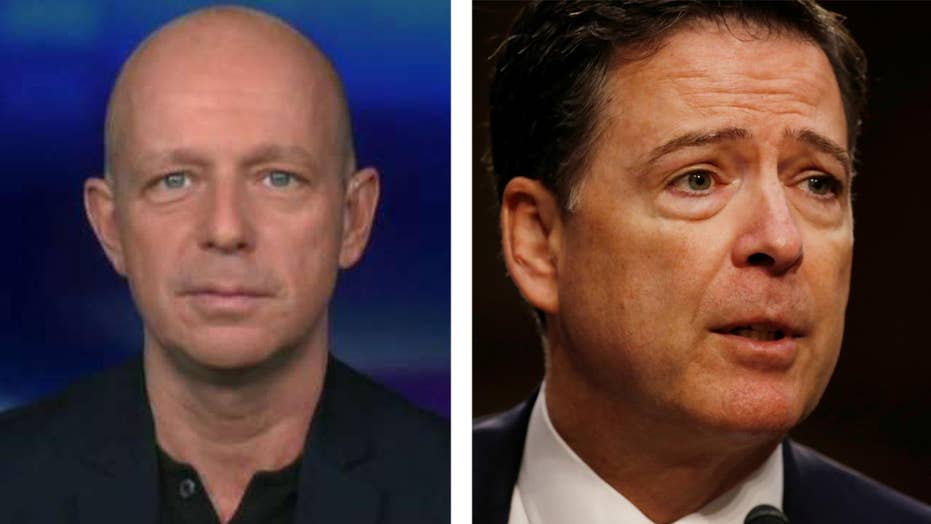 Host of 'The Next Revolution' Steve Hilton says there are 'multiple grounds' to believe the fired FBI director broke the law.

As fired FBI Director James Comey continues his self-centered, self-abasing book tour, it’s clear that he’s on a path to self-destruction as well – destroying his own reputation.

Hillary Clinton supporters hate Comey more than ever as he digs deeper into the hole he made for himself in the 2016 election.

And President Trump’s supporters are becoming ever more incensed by Comey’s spectacularly unbecoming tirade of petty – and in the perfectly apt words of NBC’s Savannah Guthrie, “catty” – insults directed at the president.

Who cares? Comey is just another pompous bureaucrat with the arrogant impulse to lord it (or should I say, “Lordy it”) over democratically elected officials in a self-appointed role as guardian of the “public interest.” I’ve seen plenty of those.

But there’s something much bigger at stake than Comey’s reputation. It’s the reputation of our most important institutions and foundational principles.

You hear President Trump’s critics complain the whole time that he is “undermining the rule of law” and “subverting democratic norms.”

Everyone is innocent until proven guilty in a court of law, and Comey has not been convicted of anything at this point. But what, exactly, could be more undermining of the rule of law than a senior law enforcement official who may have broken the law, who is publicly glorying in the fact of his own possible lawlessness, and who is using it to enrich himself?

What, exactly, could be more undermining of democratic norms than half the country believing – on the basis of ample circumstantial evidence – that America’s ruling political establishment conspired with the security services and law enforcement at the highest levels to try to prevent an outsider from being elected president? And when that failed, to try to render him illegitimate and ineffective?

There are several charges that could be investigated involving Comey – and others including former CIA Director John Brennan, former Director of National Intelligence James Clapper (who himself may have broken the law by lying to Congress over government spying), and various FBI and Department of Justice officials.

We examined Comey’s potential crimes in our special edition of “The Next Revolution,” titled “The Trial of James Comey” last Sunday.

'The Next Revolution' host examines the former FBI director ahead of the release of his new tell-all book.

But what potential charges could Comey could face?

Obstruction of justice over the handling of the Clinton email investigation; lying to Congress over the conclusion of that investigation; theft of government property, in the form of his leaked memos; and abuse of power over the infamous Steele dossier. These are among the crimes that there are strong grounds to argue James Comey committed.

Worse even than that, the more that we learn – from Comey and others – about the conduct of the Obama administration and its senior officials during the late stages of the 2016 presidential election, and in the transition period before President Trump’s inauguration, the more it appears that a truly frightening usurpation of the democratic process might have been attempted.

And yet in this 50-50 swamp of suspicion and confusion – one that is so darkly emblematic of our deeply divided country – 100 percent of the investigative and prosecutorial energy is going in one direction only.

This is not just obviously absurd and unfair. It is: making America’s divisions deeper by the day.

If we want to truly understand what happened in the 2016 presidential election, and if we want to somehow move beyond this viciously polarized and angry political moment, then we have to see equal justice done.

James Comey, John Brennan, James Clapper, Hillary Clinton, President Obama and former Attorney General Loretta Lynch all must be investigated and – if justified by evidence turned up in investigations – prosecuted.

And these investigations must be undertaken with exactly the same intensity that we are seeing applied to President Trump, his presidential campaign, and his associates. Anything less than that will leave America as divided and angry as it is today – for at least a generation if not longer.

For the sake of our democracy, the rule of law and faith in America’s institutions, we need fair treatment for all the potential crimes associated with the 2016 election, not just half of them.