Trump on Iran: 'I'm not somebody that wants to go into war'

Steve Hilton speaks on tensions between the U.S. and its 'allies.'

President Trump is being criticized by the establishment for not going to war over Iran, and for not being clear enough about his strategy. Actually he's been perfectly clear. And if I may say so, he was the clearest about his thinking in response to a question from me during a recent interview.

That is the Trump Doctrine in a nutshell. Winston Churchill famously said that meeting jaw-to-jaw is better than war. With Trump, the strategy seems to be jobs jobs jobs - at home and abroad. Sometimes that's a carrot, as with Kim Jong-un, where the president is trying to persuade North Korea's leader of the economic opportunity for his country if he gives up his nuclear plans. Sometimes it's the stick, as with Mexico and the tariff threat over border enforcement.

President Trump's preferred weapon is economic. As he showed last week, he is not casual about military conflict, unlike the inhuman establishment geniuses who'd send other people's children - in their eyes, the deplorables' children - into war at the drop of a policy memo.

On Iran, the Trump strategy has been working. After the weakness of the Obama nuclear deal, which lifted sanctions in exchange for practically nothing and gave Iran the green light to develop a nuclear weapon in the future -- oh, and $150 billion to fund terrorism --  the tough Trump sanctions enacted in 2018 have crippled Iran's terror funding and crushed its economy, nearly doubling its budget deficit and leading to rampant inflation and unemployment.

The point of all this is to get Iran to negotiate, as the president again made clear in an interview on NBC's "Meet the Press" on Sunday:

Trump: I'm not looking for war and if there is, it'll be obliteration like you've never seen before. But I'm not looking to do that. But you can't have a nuclear weapon. You want to talk? Good ... Here it is: Look, you can't have nuclear weapons. And if you want to talk about it, good. Otherwise, you can live in a shattered economy for a long time to come.

There's only one problem: Iran thinks it can survive the sanctions. That's why it's lashing out, with attacks on tankers and now this shooting down of our drone. Why does Iran think it can survive these tough U.S. sanctions? Because of our so-called allies. Europe is fighting to keep the useless Obama deal alive.

President Trump is trying to avoid war through economic pressure. Our so-called allies are undermining that pressure and in the process making war more likely. Outrageously, this exact same pattern is playing out around the world.

Just last week, Germany’s foreign minister was in Tehran sucking up to the Iranian leaders with plans for a new payment system called Instex,  which is literally designed to get around U.S. sanctions and continue doing business with Iran.

Iran believes it can divide and survive. It can survive Trump's maximum economic pressure because the Europeans want to take the pressure off. Why? Simple -- it's the Swamp. When the Obama Iran deal was finalized and sanctions were lifted, state-backed European businesses rushed in to grab the cash.

Britain pushed numerous business interests, including a new solar energy park and their telecommunications company, Vodafone, partnering with Iranian internet firm HiWEB to help modernize its network. German manufacturing giant Siemens signed a contract worth at least 1.5 billion euros to build rail coaches and upgrade train tracks in Iran. And French carmaker Peugeot got a deal to open an Iranian plant producing 200,000 vehicles a year. It turns out that one-fifth -- one-fifth -- of Peugeot's entire global market was in Iran. And the former Rothschild banker who once worked on a bailout of Peugeot is none other than Emmanuel Macron, now president of France.

Great. President Trump is trying to avoid war through economic pressure. Our so-called allies are undermining that pressure and in the process making war more likely. Outrageously, this exact same pattern is playing out around the world.

On Russia, President Trump reverses the weakness of Obama, who turned a blind eye as Putin marched into Crimea and Ukraine by hitting Putin where it hurts -- on energy. But the Germans are undermining the Trump economic pressure with their Nord Stream 2 Pipeline project, which increases Europe’s reliance on natural gas from Russia. Guess who is chairman of Nord Stream 2? Gerhard Schroeder, Angela Merkel's predecessor as chancellor of Germany.

And then the big one, China. As we've explained many times, President Trump is the first western leader in50 years to stand up to China, and again, he's doing it with his preferred strategy, economic pressure. It's working: China's economy is weakening. As the Wall Street Journal recently reported: "China’s economy shows fresh signs of weakness. Lost momentum reflects battered sentiment stemming from the Trump administration’s tariffs on Chinese exports."

Our so-called allies, of course, are busily undermining this strategy. One of the central planks of China's stated plan for world domination is their Belt and Road Initiative, which makes countries around the world dependent on China for vital infrastructure. In April, British Treasury Secretary Philip Hammond flew to Beijing to suck up to the brutal authoritarian dictators, pledging that “the U.K. is committed to helping to realize the potential of the BRI."

Oh great. So now the U.K. is helping to fund Iranian terrorism and Chinese imperialism. What next, providing financing for ISIS? Oh wait - I think British bank HSBC already did that. 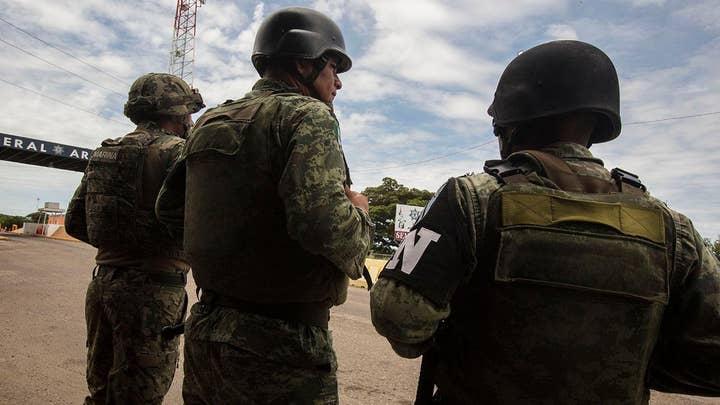 The worst of all this is that, just as with Iran and Russia, the China suck-up has nothing to do with high principle or considered policy. It's just good, old-fashioned swampiness. The U.K. treasury secretary cravenly backing china's Belt and Road Initiative  - his former boss (and mine), former Prime Minister David Cameron. After leaving office, he became head of a $1 billion fund U.K.-China fund, raising money for the Belt and Road Initiative. Former No.2 in the U.KJ., Treasury Danny Alexander is now vice president of the Asian Infrastructure Investment Bank, another vehicle for China's bid to topple America as the world's superpower.

The British, the French, the Germans --  these so-called allies of ours -- might think they're being clever by coddling authoritarian regimes for cash. But they're not. They're idiots because in the end, they will lose out -- and that's embarrassing. They might also think that undermining this administration's economic pressure on China, Russia and Iran is smart because it's anti-Trump

Well, they're wrong. It's not anti-Trump; it's anti-American. And after all that this country has done for them, that is shameful.

Adapted from Steve Hilton's monologue on "The Next Revolution" on June 23, 2019.