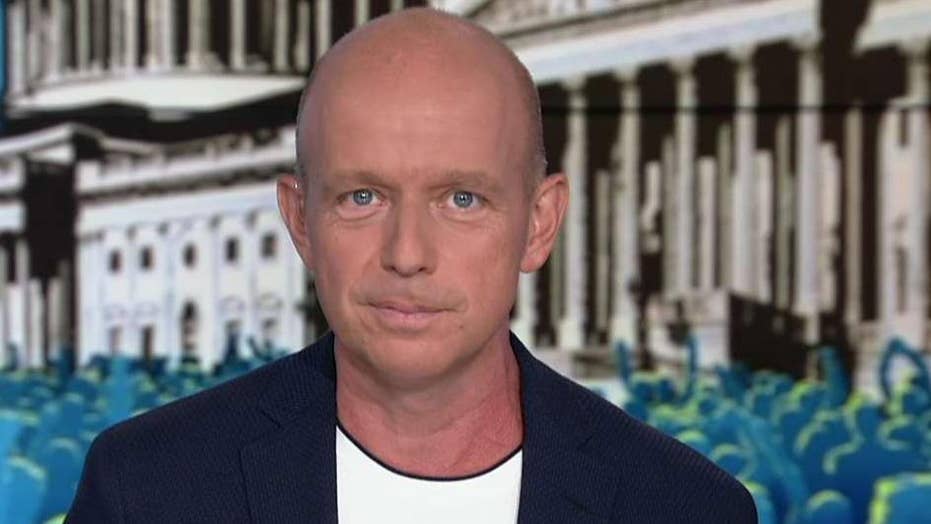 Steve Says: While Trump haters are praying for a recession, the real economy is booming

Why are fake economists rooting for the Trump economy to fail?

President Trump made the economic case for his re-election in classic style the other night during his rally in New Hampshire.

But according to the people who hate the president, it's all going down the tubes now. On MSNBC, various analysts said the following last week:

"Trump waking up this morning to a trending hashtag he was likely desperate to change - #TrumpRecession. It came alongside headlines warning that the economy is in distress, maybe even headed for a nosedive, which Trump's own aides admit could spell political disaster for the president and could pose the gravest threat yet to his re-election prospects."

"I call this another Trump slump."

"A dark cloud has taken its new place on the horizon as potential big trouble for the Trump economy."

"The threat of recession is real.”

It's pretty obvious that these establishment Trump-hating hysterics -- all of them, of course, living comfortable coastal lives -- actually want a recession because they think that's the best way to get rid of Trump. At least one of them is honest about it.

"I've been saying for about two years  -- that I hope we have a recession, and people get mad at me," said Bill Maher, host of HBO's "Real Time with Bill Maher."

Yeah, I wonder why, Bill. Perhaps because in a recession, real people - working Americans - get hurt, not you and your rich friends in the establishment state media, of course. They'd be reporting on a recession, not living it.

We saw all this talk of recession last week, not because of anything that happened in the real economy, but because of the fake economy -- the one conjured up by panicky idiots and algorithms on Wall Street.

In case you've never met any of these financial whiz kids, let me tell you who we're dealing with here. Let's put it this way: These Wall Street types, they're not exactly the kind of people you want your children turning into.

They're really not very smart. They're certainly not thoughtful or kind. They're often poorly-educated, mostly ignorant and always self-interested and greedy.

Last week, they got the whole world in a panic for no good reason. Thanks a lot, guys. (And yes, they are mostly guys.) They hear a rumor, massively overreact to a single piece of data, push some buttons and then follow each other like demented sheep.

The worst thing is, their panicky idiocy can have real-world effects. In the end, the economy is not some abstract thing. It is a human thing, the collective result of countless human decisions. Should I buy that new piece of furniture? Should I hire that extra worker? Should I open that new factory? All of these human decisions boil down to confidence about the future.

So actually, the Wall Street idiots and the establishment state media literally could cause a recession just by going on about it. The smartest thing I heard last week on fear of recession came from Brian Moynihan, CEO of Bank of America -- someone who probably knows what he's talking about. He blamed international factors for the turmoil in the financial markets and pointed out some basic facts about the real economy.

"The average worker is working, getting paid more," Moynihan said. "That's going to translate into good credit performance on the consumer side. The real risk for the U.S. economy is if the consumers slow down."

The most important point Moynihan made was when he said this: "We have nothing to fear about a recession right now except for fear of a recession."

That is exactly right. We must not let the panicky wall street wheeler-dealers and the Trump-hating establishment state media talk us into a recession. We must keep the focus on the real economy, not the fake economy.

Consumer spending is two-thirds of the economy -- and guess what, in July, it didn't go down, it went up. As the Wall Street Journal noted on Friday: "The robust report -- the strongest reading since March -- is a positive signal for the U.S. economy."

In the real economy, the Trump administration's pro-enterprise agenda is working. Lower taxes and less regulation gave businesses the confidence to invest. That means more innovation and higher worker productivity. That means more jobs are created, and workers are paid more because they're producing more. The latest jobs report saw 164,000 jobs added in July, bringing the labor force to 163.4 million - a record high.

Here's the bottom line: The Trump economy is fundamentally strong and delivering good jobs and higher earnings for the working Americans who suffered in the years of stagnation.

On workers' pay, new data the other week showed that earnings rose 4.5 percent in 2017 and 5 percent in 2018, even higher than previously reported - and miles ahead of inflation. While the Trump-haters pray for a recession and Wall Street plays around with the fake economy, the real economy is booming.

So is everything just fine and dandy, with nothing to worry about. Can President Trump and his team just sit back and ride the economic wave all the way to reelection next year?

There's no question that the rest of the world is doing poorly. China, Germany and the UK -- their economies are all heading in the wrong direction. So what should President Trump do to keep our economy moving ahead?

It's no use just yelling at the Fed -- there's a limit to what they can do. But there are two big things the president can do, on his own initiative, without Congress or anyone else.

First is something we told you about in June, a positive and practical idea from Grover Norquist, founder and president of Americans for Tax Reform. Get rid of the tax on inflation, and you'll see trillions of dollars redeployed to highest and best use," he said in an interview on "The Next Revolution. "And people have opportunities to do something with capital that's been liberated."

The second big idea is on trade and China. Look, I've been as tough as anyone on China, and as you know I completely support what the president has been doing. He's the first western leader in 50 years to stand up to China, and it's working.

But there's nothing wrong with a tactical pause to get the best possible economic climate for the re-election campaign. Make a deal now, and then hit them hard after the election.

Here's the bottom line: The Trump economy is fundamentally strong and delivering good jobs and higher earnings for the working Americans who suffered in the years of stagnation. The biggest threat to our economy comes from the loony left economic policies of the Democrats, which would scare off investment and bring back stagnation.

So the president and his team should take the initiative and take positive and practical steps to boost the economy now: index capital gains and a temporary trade deal with China.

Adapted from Steve Hilton's monologue from "The Next Revolution" on Aug. 19, 2019.