Steve Says: Standing up to China

Steve breaks down the president's strategy in the trade war with China.

The big story is President Trump refusing to back down from China.

"We are right where we want to be with China. Remember, they broke the deal with us & tried to renegotiate," he tweeted on Sunday. "We will be taking in tens of billions of dollars in tariffs from China. Buyers of product can make it themselves in the USA (ideal), or buy it from non-tariffed countries."

Today the president is being applauded across the political spectrum for his tough approach. But remember it wasn't always like that.

And Bush's successor, Barack Obama, said, "The United States welcomes the rise of a China that is peaceful, stable, prosperous, and a responsible player in global affairs."

We were told all this by everyone in the establishment, left and right. If we open up to China, if we give them the Olympics, if we only scold them gently behind closed doors -- because they hate losing face -- .if we do all that, China will behave.

What idiots! China never had good intentions. Since the late 1980s, its stated aim has been world domination, technologically and militarily. Their path to that was economic domination, achieved by hacking and stealing the West's technology and exploiting its own workers and the environment. The establishment idiots were too naive -- or too corrupted by Chinese cash -- to see it.

As president, Donald Trump is delivering exactly the tough stance he called for as a private citizen two decades ago, using tariffs as his chosen weapon. Because, of course, unlike diplomatic statements at the U.N., tariffs actually get the Chinese regime's attention.

There was one lone voice, though, two decades ago, who said the following about China:

Our biggest long-term challenge will be China....The Clinton administration, like the Bush administration, follows a policy of "constructive engagement" with China. When China disappoints expectations and ignores lofty lectures, we issue a few condemnations, hammer out some meaningless resolution at the UN (if we can get it by China's UN delegation), and call upon them to comport themselves like citizens of the community of nations. Then we get back down to business as if nothing happened. How's this policy working? It isn't."

Guess who said this? Well, that was Donald Trump.

And in a 2010 interview with Larry King, he said, "If you look at what China is doing to our country, it's disgraceful ... They're making all of our product. We're not manufacturing anything. They're making all our products, and they're selling it to us. And then they're loaning us the money ... They take the money, then they loan it back to us. We should be fighting China."

Now as president, Donald Trump is delivering exactly the tough stance he called for as a private citizen two decades ago, using tariffs as his chosen weapon. Because, of course, unlike diplomatic statements at the U.N., tariffs actually get the Chinese regime's attention.

But still, you have the same establishment geniuses who got China so wrong lining up against tariffs.

"History shows imposing more tariffs hurts the global economy and hurts the U.S. economy," said Bob Pisani on MSNBC. "I don't think there are many people that would disagree with that on any kind of long-term basis."

Actually the facts "disagree with that," Mr. Smarty Pants.

Since the tariffs, America's economy has gone from strength to strength. Faster growth, lower unemployment, higher earnings -- all since the trade war that was going to wreck the economy.

But if you want to really understand the depths of elitist idiocy over trade, tariffs and China take a look at what Never Trumper David Frum said in an interview:

If what you think you’re doing in a trade dispute with China is protecting the industries of the 1950s, like dishwashers, you’re not going to get anything. Because what the United States cares about are the industries of the future. What we’re concerned about are the technologies, the 5G telephones, intellectual property, making sure that American moviemakers are not ripped off ...tomorrow’s industries. President Trump has no vision of tomorrow’s economy.\

What a perfect articulation of arrogant coastal snobbery. "Oh, my dear! We don't want manufacturing. We want the industries of the future."

So, according to the establishment, we don't need washing machines now? What's David Frum going to do, shove his dirty underpants into his 5G laptop?

The big point here is that this whole story is not just about economics. We are literally in a battle to determine the value system that will dominate this century and perhaps the next one, too. Freedom or authoritarianism? Democracy or one party rule? Yes, the trade deficit matters. The loss of manufacturing even more. But we need to understand that China declared war on us many years ago.

As someone said to me, fighting back might mean sacrifices. But that is part of a proper war effort. But in any case, we can easily afford to fight China. To hear some people talk about it you'd think we're totally dependent on China. That is absolute rubbish. Our economy is huge, and thanks to President Trump's pro-enterprise agenda, is growing fast. Imports from China are just 2.7 percent of its total. Exports to China are a mere 0.9 percent. Over 96 percent of our economy is not trade with China. We could totally disengage from China, and we'd be absolutely fine. 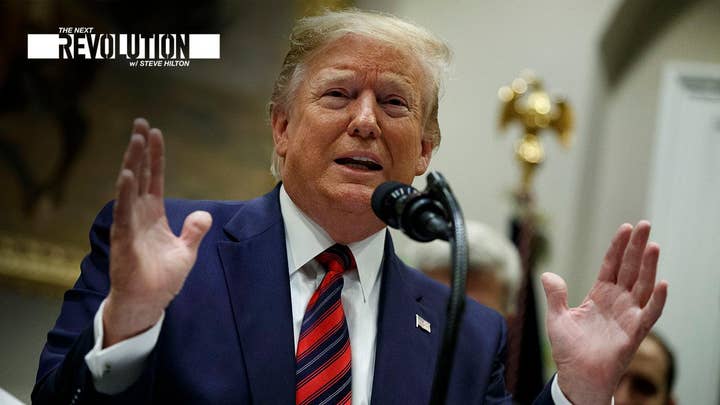 By the way, for years that's what I've been arguing for -- a total economic boycott of China and sanctions on other countries who collaborate with this evil regime. Make the world choose. You can do business with America or the authoritarian dictators of Beijing, who oppress their own people, put millions of Muslims in concentration camps, and are rolling out a new and insidious colonialism around the world with their rapacious belt and road infrastructure program. Which side are you on, Britain? Canada? The EU? You choose

We know which side Joe Biden is on. If he's the Democrats' candidate in 2020, China will be the defining issue on the ballot. Because Joe Biden has made his choice. He's with China.

"They're going to eat our lunch ... c'mon, man. They're good people...not competitors," he said recently.

Why is he saying this? Well, we told you two weeks ago. Joe Biden is compromised by China. He has taken billions of dollars from the Chinese government in the form of payments to his son's businesses. With "Joe China" in the White House, the policies of economic surrender and political appeasement would be back.

President Trump is the first western leader in 50 years to stand up to China. It could turn out to be the most important policy shift of the 21st century.

Adapted from Steve Hilton's monologue on "The Next Revolution" on May 12, 2019.