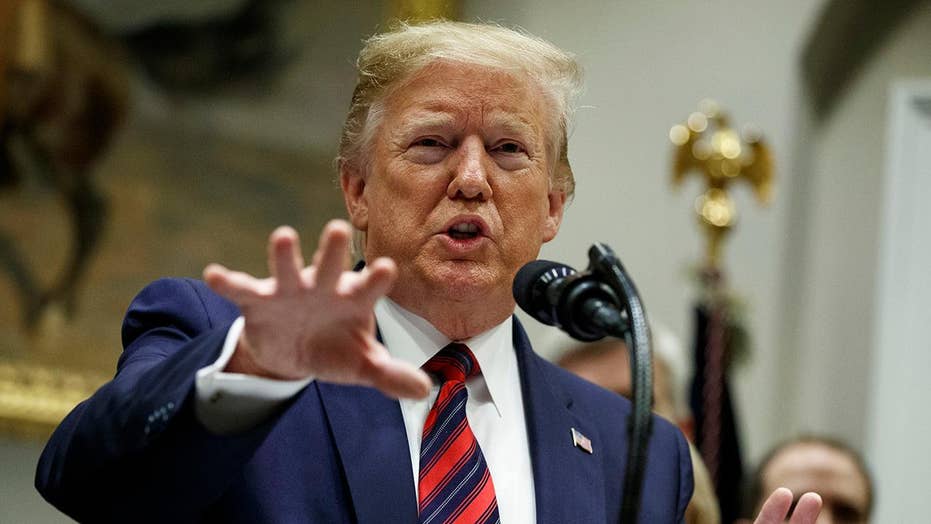 The imposition of new U.S. tariffs on $200 billion worth of Chinese imports could be a dangerous next step in a trade dispute between the world's two largest economies; chief White House correspondent John Roberts reports.

President Trump on Friday touted his administration’s controversial move to increase tariffs on $200 billion in Chinese goods after trade talks between Washington and Beijing failed to come to an agreement, while saying the Obama administration let China "get away with 'murder.'"

Trade negotiations continued into Friday morning, but the president indicated later in the day that despite "candid and constructive" talks, no deal was reached. He said the tariffs "may or may not be removed depending on what happens" next.

“Talks with China continue in a very congenial manner - there is absolutely no need to rush - as Tariffs are NOW being paid to the United States by China of 25% on 250 Billion Dollars worth of goods & products. These massive payments go directly to the Treasury of the U.S....” Trump tweeted earlier Friday.

“Tariffs will bring in FAR MORE wealth to our Country than even a phenomenal deal of the traditional kind. Also, much easier & quicker to do. Our Farmers will do better, faster, and starving nations can now be helped. Waivers on some products will be granted, or go to new source!” he continued.

The president added that the U.S. would “continue to negotiate with China in the hopes that they do not again try to redo” the deal.

Moments later, Trump hit back at suggestions the tariffs would hurt the U.S. economy, asserting the opposite while claiming his predecessor -- as well as former Vice President Joe Biden, who is running for the 2020 Democratic presidential nomination -- was too weak on Beijing.

"Tariffs will make our Country MUCH STRONGER, not weaker. Just sit back and watch! In the meantime, China should not renegotiate deals with the U.S. at the last minute. This is not the Obama Administration, or the Administration of Sleepy Joe, who let China get away with 'murder!'" he tweeted.

Trump’s tweets Friday morning come after the Treasury Department late Thursday moved ahead with increased tariffs on $200 billion of Chinese goods. The new tariffs raised the import taxes of those goods from 10 percent to 25 percent at 12:01 a.m. Friday.

“This evening, Ambassador Lightizer and Secretary Mnuchin met with President Trump to discuss the ongoing trade negotiations with China," White House deputy press secretary Judd Deere said in a statement. “The Ambassador and Secretary then had a working dinner with Vice Premier Liu He, and agreed to continue discussions tomorrow morning at USTR." USTR refers to the office of U.S. Trade Representative Robert Lighthizer.

The president has repeatedly said that tariffs would be a positive for the U.S., even saying at the White House this week that he “happens to think tariffs for our country are very powerful.”

The U.S. and China had been engaging in negotiations over a deal that would open up the Chinese market to American companies, but according to The New York Times,  talks fell apart when China called for changes to the text that served as a blueprint for the pact.

China has already imposed tariffs on nearly all American goods. On Thursday, it said it would defend its interests and respond with "necessary countermeasures" if the increases take effect Friday.

Fox News' Louis Casiano, Gregg Re and The Associated Press contributed to this report.