On March 17, millions of people around the world will be mindful of St. Patrick’s Day.

But who was St. Patrick? And why is a bishop who lived almost 1,600 years ago still important to us today?

You may know Patrick as the patron saint of Ireland. You may have heard that he brought Christianity to the Emerald Isle. And you’ve no doubt heard all about the snakes and the shamrocks and other myths associated with him.

But the real reason he still matters today is that his life demonstrates the call of God to share the Good News of the Gospel. And God still speaks to us today, if we’re willing to listen.

Most of what we know about Patrick comes from his autobiographical Confession, which he wrote when a group of bishops in Britain tried to bring charges against him. 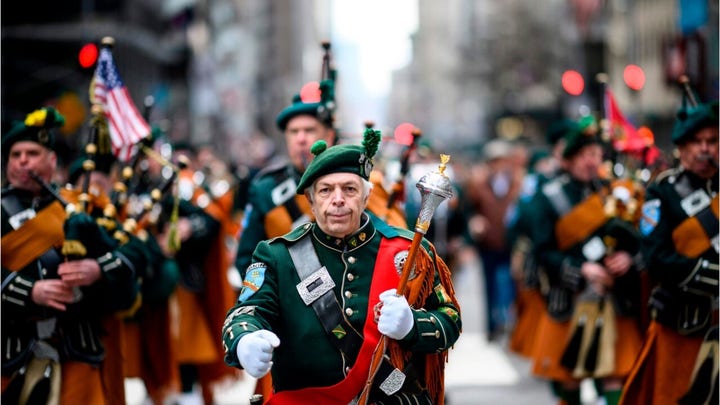 Patrick was in danger of losing everything he had worked for in Ireland, and the Confession became his defense so that others could “understand that to which I have committed my soul.”

The real reason he still matters today is that his life demonstrates the call of God to share the Good News of the Gospel. And God still speaks to us today, if we’re willing to listen.

The Confession begins with humility: “I am Patrick, a sinner, the most unsophisticated of people, the least among all the Christians, and among some, the most contemptible.”

Saint Patrick, played by Marty Burns, sails past Down Cathedral as the re-enactment of the first landing of Saint Patrick on Irish shores takes place at Inch Abbey on March 12, 2017, in Downpatrick, Northern Ireland. The Irish annals for the fifth-century date Patrick's arrival in Ireland at 432 and the patron saint of Ireland's remains are believed to buried at Down Cathedral. Saint Patrick's Day itself is celebrated around the world on March 17. (Photo by Charles McQuillan/Getty Images,)

That humility was a way of life for Patrick, who was, in fact, British and not Irish. As the son of an official in the Roman Empire, he was born into privilege. But when he was just a child, he was kidnapped by the Irish and sold into slavery.

In captivity, Patrick saw God’s hand in delivering him “out of a way of life where God didn’t matter for me.”

Now a slave in a foreign land, overwhelmed by loneliness and starvation, he had a revelation: “There, the Lord opened up my understanding to my unbelief so that however late, I might become conscious of my failings and then remembering my need, I might turn with all my heart to the Lord my God.”

After six years as a slave, Patrick heard a voice telling him to escape, and he miraculously made his way to freedom in Britain. For the next 18 years, Patrick dedicated his life to the church and became a bishop. Then he had another vision calling him back to Ireland to preach the Gospel.

If you are a Christian of Irish or Scottish descent, you owe your Christianity to St. Patrick. You may also owe him your education.

One of Patrick’s goals was for the Irish to become a people who could read the Bible. Patrick was known as a man of the Book, and the scriptures are scattered throughout his writings.

In the fifth century, few could read, and many ancient writings, including the Bible, fell into disuse and were in danger of being lost.

Patrick began a monastic tradition in Ireland that spread to the island of Iona in Scotland, and then on to continental Europe. Both the scriptures of the Jews, as well as the writings of the Greeks and Romans, were studied and copied in these monasteries, which became the forerunners of the modern university.

St. Patrick was one of the first people in history to take a moral stand against slavery. In his Letter to Coroticus, he also condemned sex trafficking: “They who distribute baptized women as prizes….will be slaves in Hell in an eternal punishment.”

The greatest message from St. Patrick is the call of God to preach the Gospel to every tongue, tribe and nation.

In the Roman Empire of the fifth century, Ireland was considered the “ends of the earth.” Today, there are over 4,000 language groups that still don’t have even a portion of scripture available to them.

The Well of Saint Patrick at Ballintubber Abbey in Ballintubber, County Mayo, Ireland. He baptised the people in year 441AD at the well. Beside the well there is a stone on which the supposed imprint of the Saint’s knee is on it.

Mission agencies agree that it is possible to complete the task of Bible translation, if not in our generation, then in the next. What is lacking are people who are willing to take up the task.

And that is the lesson of St. Patrick. God still calls, and God still sends. God still wants to shake us “out of a way of life where God didn’t matter.”

On March 17, the traditional day of Patrick’s death, let us celebrate the remarkable life of a slave who committed his life to God. With God’s help, Patrick changed a nation. Through Patrick’s example, may we realize that we can change nations as well.

Gordon Robertson, president and CEO of The Christian Broadcasting Network, is the executive producer of "I Am Patrick," a docudrama on the life of St. Patrick from CBN Films. For more information go to IAmPatrick.com.