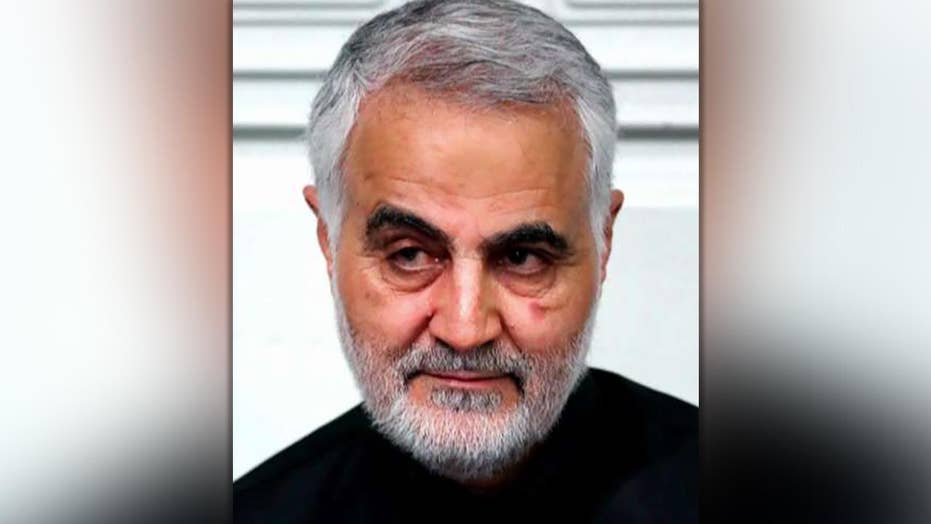 Iranian Gen. Qassem Soleimani perfected the use of explosive penetrators that could slice through American armor; Jennifer Griffin reports from the Pentagon after the general's death by U.S. airstrike.

Trump’s deliberate assassination of Qassem Soleimani on Friday morning in Baghdad shows that America will no longer stand for Iran’s terrorism takeover of Iraq.

Trump’s message is clear. There’s no sanctuary anywhere in Iraq for an Iranian terrorist.

When Iran’s Quds commander instigated the attack on the U.S. embassy in Baghdad, it was the last straw. President Trump had to act, in part because Soleimani’s Quds force was readying more attacks on American military members and diplomats. Those attacks could have come in Iraq – or at other locations.

The Soleimani strike was precise and proportional. It should also terrify all other senior leaders in Iran’s Revolutionary Guard Corps.

For the strike was also premeditated. Soleimani was not hiding out like Abu Bakr al-Baghdadi, or Usama bin Laden. He was an easy target to find.  The general was brazen and appeared openly in public all the time.

He flew all over the Middle East region in his own airplane. This summer, a U.S. special forces commander landing at an airfield in Syria saw Soleimani’s plane parked there already.

The deliberate killing of Soleimani opens a new chapter and shows Trump’s willingness to use military force to put Iran’s terrorist monster machine back in its box.

The military tactics side was as close as you get to a sure thing. Remember the two U.S. Apache helicopters releasing flares over Baghdad Tuesday night? That proved the U.S. owns the skies over Iraq.

U.S. Reaper MQ-9 drones, which are husky, heavily armed surveillance planes, are on station 24/7.  The tactic of watching Soleimani exit his plane and then striking the departing cars is a technique U.S. forces and allies have refined over the last two decades. -- Reaper drones carry the Small Diameter Bomb, which is especially good at hitting moving vehicles such as Soleimani’s convoy.

As a result, the president had plenty of time to consider the strike. President Trump and Secretary of State Mike Pompeo also had time to notify key allies and warn them of impending military action, especially since escalating conflict could now draw them in.

Of course, Soleimani already had American blood on his hands.

It’s hard to put into words how evil Soleimani was. He rose to prominence in the 1980-88 Iran-Iraq war, which killed over half a million people.

By 2004, Soleimani’s Quds forces were supplying weapons to Iraqi militias, who used them to kill American and coalition soldiers in Iraq.

In 2011, Soleimani set up a plot with Mexican drug cartels to kill the Saudi ambassador to the United States, Adel al-Jubeir, in Washington, D.C. The FBI disrupted it. “The United States is committed to holding Iran accountable for its actions,” Obama Attorney General Eric Holder said Oct. 12, 2011.

Yet the Iranian general got away with it, until now. Bush and Obama knew Iran’s terror network well, but it was “hands off” when Soleimani’s Quds operatives ran amok in Iraq and Syria all those years.

The deliberate killing of Soleimani opens a new chapter and shows Trump’s willingness to use military force to put Iran’s terrorist monster machine back in its box.

The aim was to deter future Iranian attacks. Iran’s regime is populated by thugs who only understand getting clubbed, former Secretary of Defense Jim Mattis said at the Reagan Forum on December 7.

Still, the stakes are very high. Expect more strikes on Iranian terror networks in Iraq, if necessary. U.S. forces have the ability to target and strike other Iranian terrorist kingpins in Iraq, Syria and other locations. With or without cooperation from others, U.S. forces can track them down and kill them.

The Soleimani strike represents a serious, strategic decision. Still, the left will tell you it’s a political smokescreen.

The left keeps comparing the Baghdad incident to Benghazi. Yet there are key differences: four Americans did NOT die, the Trump team took decisive action instead of watching helplessly from the Situation Room and no one made up a ridiculous story about a video causing the whole thing.

The situation with Iran is too dangerous for partisan politics. Let the executive branch do its job.  Trump should give Congress classified briefings on his Iraq and Iran strategy, then Congress should keep quiet, as they have largely done with North Korea.

Trump’s strike on Soleimani also answers critics who called for direct, military action after Iran’s strike of the Saudi oil facility and the downing of the U.S. Global Hawk drone.

President Trump authorized the killing of Soleimani not for revenge, but to start shutting down the monster of Iran’s terror network.

This assassination, shocking as it is, was calculated to make America safer right now, and over the long term.