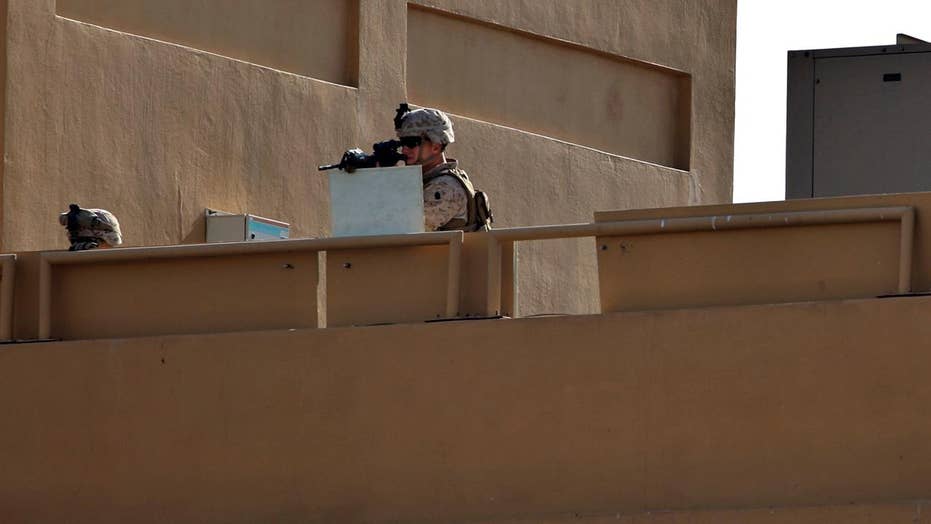 After the tremendous sacrifices America made to liberate Iraq from the rule of brutal dictator Saddam Hussein and end his threat to other nations, we must not allow Iraq to become a puppet of the virulently anti-American dictatorship that rules Iran.

Yet as we saw this week when militia forces loyal to the Islamic Republic of Iran attacked the U.S. Embassy in the Iraqi capital of Baghdad – setting fires and causing other property damage in the embassy compound – Iran and the Iraqi militia forces it controls are already playing a major role in neighboring Iraq.

I fought in Iraq as a U.S. Army intelligence soldier in Operation Desert Shield and Desert Storm in 1990 and 1991 and was there again from 2005 to 2006 as an embedded intelligence adviser for the Iraqi Army in Mosul, followed by service in Iraq for the Defense Intelligence Agency. I have been back many times in my capacity as a terrorism expert for the National Defense University and a senior fellow for the Hudson Institute.

It’s clear to me that we need to reevaluate our relationship with the Iraqi government, while supporting the Iraqi people who have been protesting against corruption by their government and its dangerous move from an alliance with America into ever-closer relations with Iran.

Iraqi government leaders have not shown the capability or willingness to secure their borders and territory against forces loyal to Iran, who continue to destabilize the country and the region.

Iraq’s lack of a strong and unified national government will continue to incubate threats that the U.S. and the international community will have to deal with, unless we can spark some major changes.

What does this involve?

I’m not calling for the U.S. to attack the Iraqi government militarily and launch another war. We can improve the situation there in far less costly ways.

First, the Trump administration should tell the Iraqi government we will cancel $30 billion in U.S. loan guarantees unless it stops cozying up to Iran. Those guarantees that we have given to Iraq have enabled the nation to attract vital international investment that is propping up the nation’s economy.

Second, the U.S. should threaten to stop providing training and equipment to an Iraqi security force co-opted and infiltrated by militias tied to Iran. If those militias – only nominally under the control of the Iraqi government – and the Iraqi Ministry of Interior and Defense remain more loyal to the Iranian regime than Baghdad, we should no longer provide the Iraqi government with funds, training, equipment and intelligence. It makes no sense to train forces that will stand by while militias attack our troops – or worse,  participate in such attacks.

Third, we should sanction Iraqi government and militia leaders who are loyal to Iran and hostile to America. Specifically, we should sanction and designate as terrorists pro-Iranian militia leader Hadi al-Ameri and his Badr Organization, and Iraqi National Security Adviser Falah al-Fayyad for their role in the attack on the U.S. Embassy and the killing of innocent unarmed Iraqis.

Fourth, we must keep U.S. troops in Iraq – just as we are keeping troops in Syria. This is necessary to ensure that the ISIS terrorist group does not once again became a powerful force and to counter the threat posed to our own national security by the Iranian Revolutionary Guard Corps and its unconventional warfare Quds Force, as well as by militias loyal to Iran that are operating in Iraq.

Fifth, we should aid the Kurds in the enclave they control in northern Iraq and Iraq.and Iraqi nationalist forces opposed to Iran. We should provide them with the military training and support we are now giving to the Iraqi government if the government refuses to stop allying itself with Iran. It is simply common sense to support our friends – but not the allies of our enemy Iran.

Sixth, next time pro-Iranian militias attack U.S forces in Iraq we need to be prepared to punish Iran directly by hitting the Revolutionary Guards and its Quds Force. The U.S. is moving additional military forces into the region for protection of our forces to defend against militias directed by Tehran.

Unfortunately, we can expect more pro-Iranian militia attacks on U.S. forces and interests in Iraq like the one last week that hit an Iraqi airbase where U.S. forces were stationed, killing an American contractor and wounding four members of the U.S. military.

Instead of condemning the Kataib Hezbollah terrorist group, which is controlled by Iran, for launching rocket attacks that killed the American contractor, the Iraqi government condemned the United States for defending itself against the terrorist organization. We have the right to expect more from a government that is supposed to be our ally.

U.S.-trained Iraqi security forces failed to stop the attack on the U.S. Embassy compound, letting the attackers breeze right by. Strong pressure by President Trump and top U.S. officials later led the Iraqi military to assist U.S. Marines in guarding the embassy, leading to the withdrawal of the attackers without the loss of any American lives.

There have actually been many recent rocket attacks by pro-Iranian militia on U.S. bases in Iraq, but earlier attacks did not claim any American lives. President Trump was right to order retaliatory attacks Sunday to make clear that the U.S. will not tolerate the killing of Americans without responding with deadly force.

In the U.S. retaliatory attacks, American forces hit five bases along the Iraqi-Syrian border. These are the bases built to support Iran’s land bridge and offensive operations in Syria against Israel. Stopping Iranian-sponsored attacks on Israel must to be a priority for the U.S., to prevent the outbreak of an Iranian-Israeli war that could make the unstable Middle East far more unstable.

If U.S. forces withdraw from Iraq we can expect to see Iraq change sides and end its status as a U.S. ally to become an Iranian puppet that would not just oppress the Iranian people, but would endanger our national security and the security of the entire Middle East.

Michael Pregent is a senior fellow at the Hudson Institute and a terrorism expert for the National Defense University. He is a former  Army intelligence soldier and later worked for the Defense Intelligence Agency.