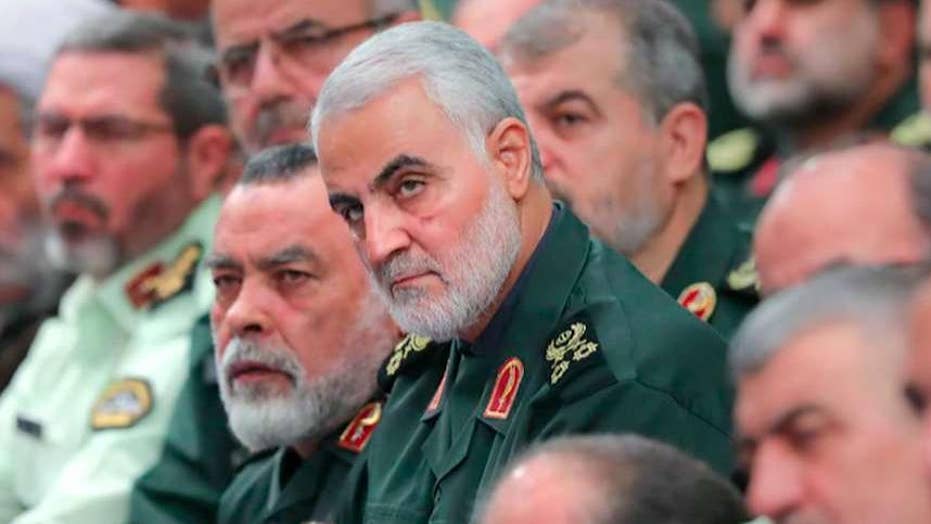 President Trump acted correctly and decisively in ordering the Friday morning killing of Iranian General Qassem Soleimani, the head of the Islamic Revolutionary Guard Corps’ elite Quds Force, in an airstrike in Iraq.

The force Soleimani led is responsible for exporting terrorism and political chaos for the Iranian regime.

Soleimani had the blood of hundreds of Americans on his hands, and was in the Iraqi capital of Baghdad planning attacks on more Americans throughout the Middle East. Trump acted to prevent this bloodshed from occurring and also effectively retaliated for the failed attack by an Iranian proxy militia on the U.S. embassy in Baghdad Tuesday.

Responding to the killing of Soleimani, Iranian Supreme Leader Ayatollah Ali Khamenei warned Friday that “harsh retaliation is waiting” for the U.S.

Trump’s Democratic opponents didn’t even wait for our president to speak before they attacked him.

Far-left freshman Rep. Ilhan Omar, D-Minn., tweeted: “So what if Trump wants war, knows this leads to war and needs the distraction?”

Former Vice President Joe Biden, the frontrunner in the Democratic presidential nomination, said in a statement: “President Trump just tossed a stick of dynamite into a tinderbox.”

So much for rallying around our president at a time of crisis.

Instead, Democrats are busy implying Trump acted only to distract the public from the impeachment sham – which most Americans have already tuned out – or ordered the killing in haste and without sufficient provocation.

Let’s look at the scoreboard since the Islamist regime came to power in Iran a 1979 revolution marked by capturing and holding 52 Americans hostage for 444 days.

Iran’s proxies then bombed our embassy in Beirut in 1983 and were responsible for killing 241 servicemen at our Marine barracks there. They took American officials hostage in Lebanon later that decade and tortured and killed some.

Iranian agents blew up the Khobar Towers dormitory used by U.S. Air Force personnel in Saudi Arabia in 1996. During the 2000s, Iran was responsible for the deaths of a major portion of the Americans killed in Iraq by Shiite militias.

Just in the past year, Iran has repeatedly targeted U.S. citizens and interests, ranging from killing a U.S. serviceman in Afghanistan, to disrupting shipping in the Arabian Gulf, to shooting down a U.S. Navy aircraft in international airspace.

Trump has hardly acted in haste. He canceled an attack on Iran last June because he thought the possible cost in human lives would have been disproportionate to the provocation. And he has prioritized financial sanctions over military force in trying to get Iran to abandon its nuclear weapons program.

Trump finally had enough only after Iran was caught once again plotting American deaths and attacked our embassy in Baghdad.

For the first time, an American president has pushed back forcefully on Tehran and made it pay a clear consequence for its use of terrorism. Ultimately, that is what Democrats cannot countenance.

Democrats cannot stand the decisive use of American power to advance our national security without apology. They want to blame Trump – and America – for the world’s problems, especially in the Middle East.

Singing from Tehran’s song sheet, Democrats in Congress and on the campaign trail now all but promise Iranian retaliation.

We’ll see. These are the same voices that promised mayhem when we moved our embassy in Israel from Tel Aviv to Jerusalem. The ensuing protests featured more Western journalists than actual protesters.

Trump can hold Iranian territory at risk with little cost to the United States. As hawkish Sen. Lindsey Graham, R-S.C., has suggested, we could strike Iran’s vulnerable oil refineries with little risk and great impact on the Iranian economy.

Better still, we could seriously degrade Iran’s nuclear weapons potential by disabling its uranium-processing centers and plutonium-yielding nuclear reactor. None of this need entail an invasion or nation-building.

Most likely these steps will not be necessary, as the Iranian regime reels, facing strong new resistance to its foreign adventures and protests at home by Iranian citizens who want a different government.

Furthermore, don’t think the importance of Trump’s action will be lost in the capitals of other U.S. adversaries. China’s Xi Jinping, North Korea’s Kim Jong Un, and Russia’s Vladimir Putin all undoubtedly hoped that the Democrats’ impeachment sham would have weakened Trump – even if it didn’t remove him from office. Now they know it didn’t.

As for the Democratic naysayers, we once again should marvel at the wisdom of the Founding Fathers in investing nearly all defense and foreign policy power in the presidency. As Alexander Hamilton wrote in the Federalist Papers:” “… the direction of war most peculiarly demands those qualities which distinguish the exercise of power by a single hand.”