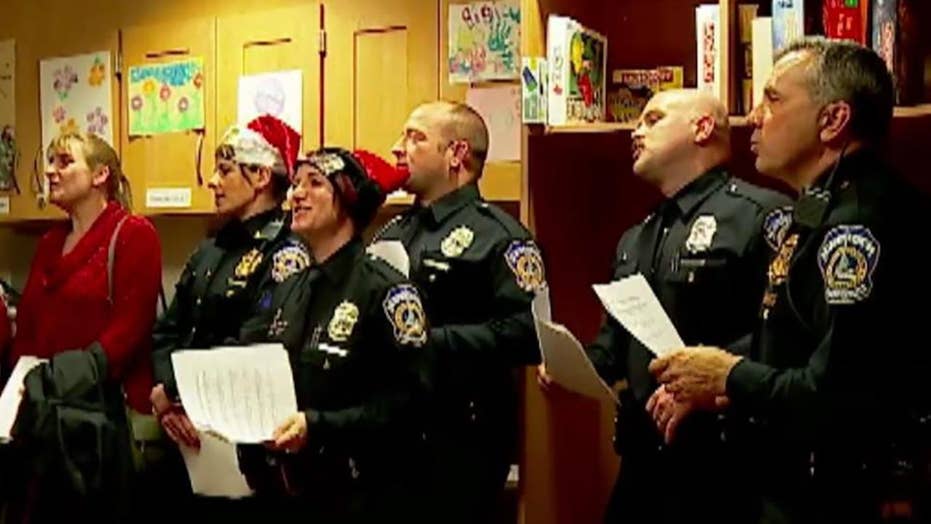 Fights over borders and wars are ripping Washington apart, but what we hear from afar gives us reason to take heart.

It was 200 years ago this Christmas Eve, on a cold and snowy night in the small Austrian town of Oberndorf bei Salzburg, inside the small St. Nicholas Catholic parish church, that the beloved Christmas carol “Stille Nacht - Silent Night” debuted.

The poem, penned two years earlier in 1816 by Josef Mohr, a 26-year-old priest, was set to music by 31-year-old Franz Gruber, a local teacher and the church’s organist. According to legend, the organ was broken that Christmas, a leather bellow gnawed thru by a mouse. Desperate for music that could be sung without its usual accompaniment, the tune was composed for guitar. But because the guitar was not an approved ecclesial instrument at the time, the new song was performed by the two men after Midnight Mass. Mohr played the guitar and Gruber sang bass. The church’s congregants sang the chorus.

Music is often a mirror of the moment, and Mohr’s lyrics reflected a longing for peace and serenity at a time when the nerves of its impoverished citizens were raw from the ravages of the Napoleonic Wars.

Yet the history of the world's third-best-selling single is a testament not only to warm seasonal sentiment and old-fashioned endurance – but to collaboration, cooperation and enterprise, hallmarks of most good endeavors that stand the test of time.

The Mohr-Gruber partnership is well documented, and both men are deserving of credit for producing a piece so emotive and memorable that many, including President George H.W. Bush (and my own father), request it be sung to them on their deathbeds.

Yet, in the spirit of Frank Capra’s perennial classic "It’s a Wonderful Life," the success (or failure) of one always impacts the trajectory and outcome of others. This is certainly so in the case of "Silent Night."

Josef Mohr, the man responsible for authoring the poem that became the world’s most popular Christmas carol, was born out of wedlock, a scandal that threatened to stigmatize the youngster for life. It was Johann Nepomuk Hiernle, the local choir vicar in Salzburg, who overlooked the cultural prejudice, saw his talent and began financially and personally investing in the youngster, mentoring and supporting him throughout his childhood. In Hiernle, Mohr had found a champion who cheered him on.

Aside from perhaps long-distant relatives, Andreas Peterlechner, a school teacher and Simon Dobler, a pastor in Hochburger, Austria, are names that history has all but forgotten. But it was Mssrs. Peterlechner and Dobler who first identified the musical gifts of Gruber. They nurtured his talent and encouraged him to study under Georg Hartdobler, a highly respected musician who taught the youngster to play the organ.

But how does a single song, composed and sung by two seemingly obscure artists, first performed in a small church in Austria, somehow rise to enduring, world-wide fame? Enter Karl Mauracher, a repairman summoned to patch the hole in St. Nicolas’ organ. Taken by the piece, he introduced the music to two friends, both of whom were members of Austrian folk singing families. The Rainers and the Strassers were equally enamored with the music and added the piece to their international shows. Audiences loved it. The Rainers first performed "Silent Night" in New York City in 1839. It’s been sung every Christmas since.

George Bailey’s guardian angel, Clarence Odbody, was right when he said that one man’s life touches so many others.  Indeed, a single song, like almost anything else, is rarely a single act of genius, and its composition and distribution are dependent upon an anonymous army laboring behind the scenes.

The bicentennial commemoration of Mohr’s carol reminds us that behind the holiday’s trappings and traditions, beyond the legends and lights and the songs, there rests a story behind the story, and never more so than at Christmas. The Incarnation, the Christian belief that God is the King who came quietly to earth in the form of a helpless baby on a silent night in Bethlehem, is the ultimate mystery and miracle by which even the years on the calendar are still measured. Millennia have come and gone and yet it still draws the Christian faithful to sing the same song first sung on a cold Christmas Eve 200 years ago.