CHICAGO – Many folks have asked Pastor Corey Brooks why he puts himself through the torture of staying on the roof through the bitter cold Chicago winter. The obvious answer that he gives is that he wishes to build the most magnificent community center to provide his long-suffering community with hope and opportunities. But that answer does not reveal the underlying reason.

For the last 70 years, the United States government imposed post-60s liberalism in the form of Great Society programs onto black communities. Many of these programs failed to engineer blacks upward and instead created the permanent black underclass where failing schools and the overriding culture of dependency act as barriers to progress. Throughout the years, many people have tried to reverse the profound damage done by the government and they have failed.

The mere thought of failing terrifies the pastor and that is why he remains on the roof. Surrounded by desolation, it is his last stand against post-60s liberalism.

On the 92nd day of his 100-day rooftop vigil, the pastor reached out to Shelby Steele, a writer and filmmaker who recently made a documentary that featured the pastor: "What Killed Michael Brown?" Steele has seen firsthand how post-60s liberalism destroyed a once thriving working class neighborhood.

"I'm an avid fan and a reader of all your materials, all your books, and I'm excited that you got a new book that's going to be coming out soon," the pastor said. "What was it like on the south side of Chicago before government decided to come in to the lives of blacks and attempt to socially engineer their way upward?"

"I suppose looking back from today, it was a kind of golden age, almost. This was after the war post-50s, 60s. The government had no interest in socially engineering black Americans anywhere. We were pretty much left to our own devices within the boundaries of segregation. So we were limited in that regard," Steele said. "And yet within the community itself, there was an ethos of responsibility and a new possibility in a post-war community. And so the focus was on what we could do for ourselves, and we did many great things. On the street I grew up, a friend down at the end of the block, his name was Melvin Van Peebles — he invented independent filmmaking in America, in the world." 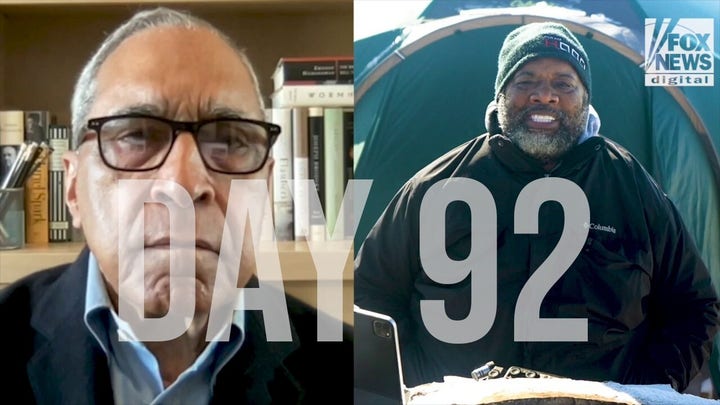 "There was a girl named Linda Hawkins who became a PhD biologist," Steele continued. "There was an idea that we would take ourselves up. There was mutual respect. The family structure was supported. The marriage rates were higher than in many white communities. And we were on the way. And so it was a great place for me to grow up. I never saw a pistol until I was probably 18 or 19 years old. I never heard a gunshot. You showed respect in the community and you could be disciplined by other people's parents who would say, well, I'm going to tell your mother on you and mean it."

"There was a sense that we were an important people on our way up."

"It sounds like before post-60s liberalism, we were moving upward. So what is it that you feel happened in the 60's that changed all of that?" the pastor asked.

"We ran into white guilt," Steele answered. "By that, I mean white America did something extremely brave, courageous, honorable in every way. As the civil rights movement began to build in the 50s and 60s, they acknowledged that America had committed an original sin - racism, slavery, segregation, oppression. Our lives were really circumscribed by white racism.

"When America finally acknowledged that and admitted that, it became interested in its own redemption, in its own moral legitimacy. And it began to build programs, a Great Society, and so forth that showed America to be concerned with redeeming itself from its history — not in asking for development from the black community. So in a sense, our fate was stolen from us as blacks, was taken away and used to re-establish the moral legitimacy of whites.

"Well, it was very wonderful for whites to recognize the tragedy of the past and want to make up for it. But in the process, they duplicated. They took our fate out of our hands. They said to us, we can fix you better than you can fix yourself. We're the actors. And you can hear the white supremacy in this form of liberalism. The idea that whatever happens to you black people, we do it. You're not the actors in your own faith. That's what then took the steam, the focus away from blacks…and we began immediately in the mid-60s to fall into decline, and we have been declining ever since. And today we are further behind whites than we were back in the 60s."

"There was not a permanent black underclass. I never heard of a black underclass until the work of William Julius Wilson came out in the 1970s," Steele replied. "He was the first to document the burgeoning of this black underclass. The word itself suggests that this was a class of helpless people and it is. Helplessness is the marker. There's people who are stuck in poverty and have no way out...It rewards us for being irresponsible. It says there's no degree of irresponsibility that you can fall into that we won't reinforce with public money. We will reinforce you for that. We won't ask you to do better, and we will support you when you do worse. And so you get a people falling out of the working class. Falling out of family life. Falling away from the institutions that make a community strong. And then you're left with a underclass."

"Mr. Steele, I'm here on the roof because we've had 70 years of decay in this community. People laugh and mock and talk about me being here. But in a way, I really feel like it's a sign of desperation, how desperate things have gotten. And have we really come to a place in America where I and my staff feel that the only thing to reverse the decline is through extreme measures like me being on a rooftop?" the pastor asked.

"I think you’re God's gift right now to black America, to the black community all across America, because we've gotten this terrible, terrible idea coming out of the 60s, that our dependency on the larger society is justice. And that what we need to be doing is protesting, and that we need Black Lives Matter, and that we need black anger and we need black identity," Steele said. "No, those things assuage us as we decline. What we need are traditional family values. A mother and a father — no social programs will ever substitute for that. We need that sort of common sense responsibility for our own fate — don't just keep giving us things, more and more things. Ask more from us and we need to ask more from ourselves."

Steele continued with his thoughts: "I think America's patience is going to run out pretty soon, but the work that you do, my friend, is the future. You are building us, putting us back together. You are focusing on all these things. You're asking something of the people you're trying to help. That's the secret, and they know what to do and how to organize themselves, how to think about the world. I learned this at the community center (that I grew up in). I am responsible. I have to clean this space and take care of this and do my homework and so forth and so on. And I have to prepare myself to move into the larger world and become a part of American society, fully and educate myself. And if I don't, I'm going to suffer. But that's up to me. I have the opportunity to overcome that."

"Absolutely. In a way we really feel like this is our last stand against post-60s liberalism. We really do. You've been there since the beginning and we really feel like we're doing the right thing," the pastor said. "I appreciate what you do so very much as you are a blessing to not just me, but people across America."

"It may sound like I'm putting the syrup on the syrup, but I just want to emphasize you are doing what I know nobody else is doing," Steele said. "I'm guilty, sitting out here in Arizona in this warm weather and you're sitting there, but you are standing for something that is just enormous and that is revolutionary: the idea of self-help as the way for black America to overcome its history of deprivation. That is a revolutionary idea that you are the only one I know who's actually down on the ground doing it, and so all due respect and support for that. Thank you."

"Thank you. I appreciate it so much."

Follow along as Fox News checks in Pastor Corey Brooks each day with a new Rooftop Revelation.