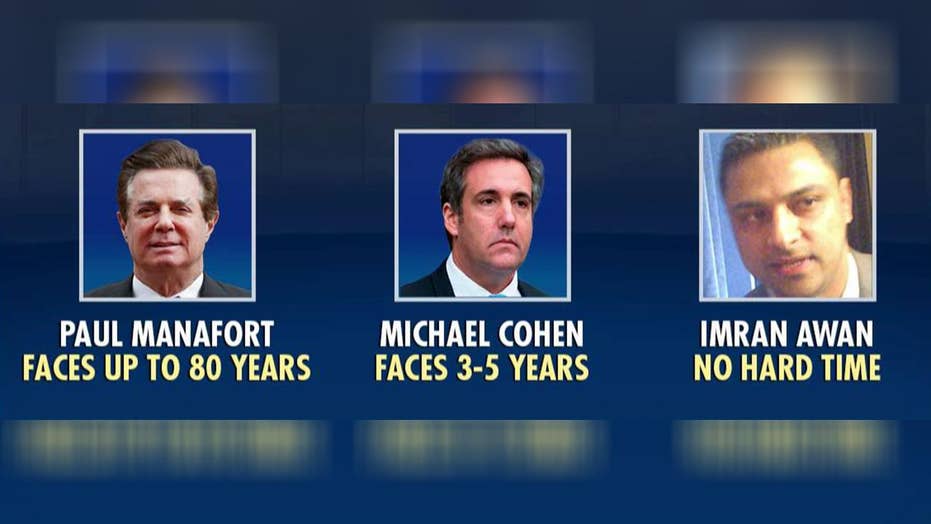 Tuesday was a lucky day for Imran Awan, the former IT administrator for Rep. Debbie Wasserman Schultz, D-Fla. A federal judge sentenced him to three months of supervised release and no fine for one count of bank fraud – sparing him any jail time.

Awan could have faced much more serious charges and a long prison sentence if he had been tried and convicted on accusations that he ran a spy ring inside Congress and stole congressional computer equipment.

Yet stunningly, Awan was not charged with those crimes. Instead, federal prosecutors ignored their own compelling evidence implicating him in the spy ring and exonerated him.

This is what happens when the establishment and the mainstream media collude to cover up a Democratic scandal.

Awan, who pleaded guilty last month to a single charge of making a false statement to obtain a home equity loan, could have been sentenced to up to six months in jail on that plea at his sentencing Tuesday.

Just read the FBI affidavit used to indict Awan and you’ll plainly see that even a prosecutor working on his or her first case wouldn’t have had any trouble getting a conviction for bank fraud against him.

However, the Justice Department opted to plea the charges against Awan down to one count of making a false statement on a home equity loan application – a crime that that allowed Awan to wire $283,000 to Pakistan.

In return for that sweetheart plea deal, the Justice Department got a cover-up.

The more than 40 members of the US. House of Representatives – all Democrats – who employed Awan and members of his family and associates to handle IT work now won’t have to explain anything in court. Their staffers – even the ones in offices where so much official equipment went missing, including some that showed up in one of Awan’s rental properties – won’t have to testify either.

Now no one will have to explain why Awan and his crew were paid over $4 million by those members of Congress and why so much has been done to hush this up.

There is a lot of evidence indicating that the Awan and his team members were copying data from the computers of House members to the House Democratic Caucus server and even to a private Dropbox account.

Awan and his associates were even tossed off the House system because they provided false information (a fake copy of the Democratic Caucus’ server) to Capitol Police. But incredibly, none of that was used against him in court.

This is clearly a political deal arranged to protect the establishment from further embarrassment and reform.

Before announcing Awan’s sentence Tuesday, U.S. District Judge Tanya S. Chutkan, who was appointed by President Obama in 2013, called the media coverage of the case “scurrilous” and said that Awan and “suffered sufficiently.”

Instead of being treated like an accused criminal, Awan was treated as a victim.

Anyone who reads my upcoming book "Spies in Congress: Inside the Democrats' Covered-Up Cyber Scandal,” will understand how just appalling this is, as there is still a lot left to come out on this spy thriller of a case.

If the Justice Department had pursued additional charges against Awan, prosecutors might have taken depositions from House members and their staffers. There could have been court scenes that would have given us a look right into the congressional offices that employed Awan and his associates.

A trial of Awan on charges that he was part of a spy ring collecting information from House members would have necessarily dug into a lot of things the Washington establishment would rather not deal with publicly. It also would have forced investigators to follow the trail to Awan’s native country of Pakistan – something the U.S. intelligence community would rather avoid.

The end result is that Awan, his wife (charges against her were dropped) and his crew are getting off easy, and Congress and the media like it this way for their own reasons.

Outside of the quaint idea that justice should be equal – even for members of Congress, their staffers and contractors – there are a lot of problems inherent in covering up this multifaceted case.

Foreign intelligence agencies must have noticed how easy it was for the Awans to get access to the date and emails of so many members of Congress.

The slap on the wrist that Awan received hardly acts as a deterrent to those who’d like to know what members of Congress are saying behind closed doors.

As any computer security professional will tell you, the weakest part of any system is people. Security won’t be taken seriously if no one pays a price for allowing massive security breaches in Congress.

President Trump’s tweets related to this case were even used as a rationale by Judge Chutkan to let Awan walk out of the courtroom with only three months supervised release.

If there is one takeaway right now it’s that the Trump administration should demand an investigation by the Office of Inspector General into how this plea deal was made. The IG should also look into what actually happened in Congress. This case offers the president the opportunity to expose the swamp to the American people.

By covering this up, the establishment has left a lot to come out that will embarrass Congress, the mainstream media and the Justice Department.