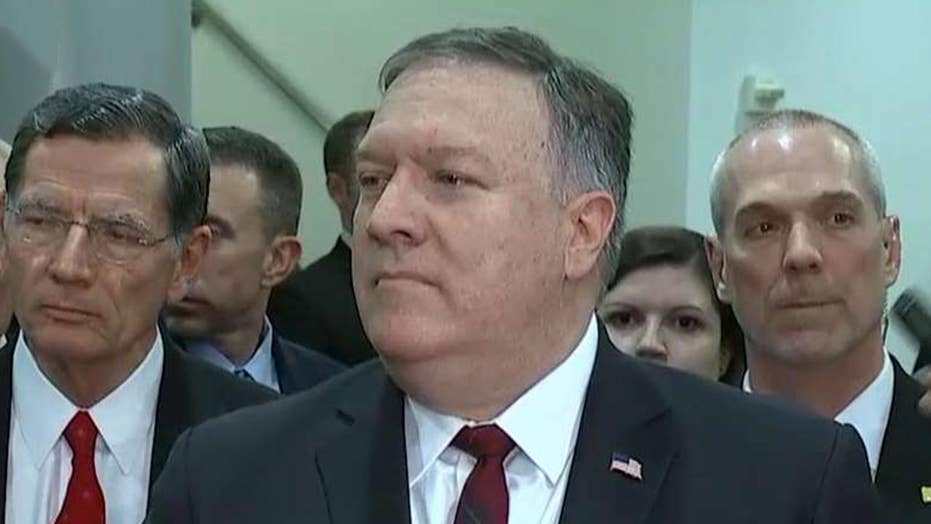 After a briefing with the Senate, the secretary of state says a resolution limiting U.S. involvement in the Saudi-led war following the death of Jamal Khashoggi would undermine cease-fire efforts.

After Saudi operatives brutally murdered Washington Post columnist Jamal Khashoggi at the Kingdom’s consulate in Istanbul in October, the Senate is rightly reviewing U.S. relations with Saudi Arabia, including debating U.S. involvement with the Saudi-led coalition in the Yemen conflict. Not enough attention, however, is being given to Iran’s direct responsibility for the suffering, violence and tragedy in Yemen.

The humanitarian crisis in Yemen is staggering. The ongoing conflict between the Saudi-supported, internationally-recognized government in Yemen, and the Iran-backed Houthi rebels, reportedly has claimed over 57,000 lives, driven half of Yemen’s 28 million people to the cusp of famine, and displaced 2.3 million Yemenis from their homes.

The U.S. has powerful interests not only in ending Yemen’s humanitarian crisis, but also in stopping Iran and its Shi’a terrorist proxies, as well as Al-Qaeda in the Arabian Peninsula (AQAP), ISIS-Yemen, and other Sunni terrorists, from establishing permanent footholds from which they can threaten our nation and our forces in the region.

In Yemen, as in Syria, Iran is ruthlessly pursuing malign hegemony with no regard for innocent lives. The Iranian regime is using arms transfers, training and terrorist proxies to empower Houthi rebels, terrorize Yemeni civilians, undermine the security of Saudi Arabia and the United Arab Emirates, and challenge U.S. national security interests in the region.

Moreover, Iran-backed Houthi rebels have detained thousands of Yemenis and reportedly subjected many of them to “extreme torture – being smashed in their faces with batons, hung from chains by their wrists or genitals for weeks at a time, and scorched with acid.”

Iran’s Islamic Revolutionary Guard Corps (IRGC) and Iran-backed Lebanese Hezbollah terrorists have provided training and support that have greatly increased the lethality and combat effectiveness of Houthi rebels, and enhanced their ability to threaten Saudi Arabia, the United Arab Emirates, international shipping in the Gulf, and U.S. forces in the region. Even if Iranian weapons are somehow cut off, the Houthi rebels’ combat-experience and training will persist for decades.

While the United States is right to hold Saudi Arabia accountable for Khashoggi’s barbaric murder, we must also squarely face Iran’s central role in perpetuating Yemen’s conflict. Failure to do so risks yielding more war, oppression and misery in the region over the long term.

But speaking honestly about Iran’s direct responsibility for Yemen’s tragic conflict does not mean we must ignore the counter-productive actions that Saudi Arabia has sometimes taken.

While the Saudis must answer for Khashoggi’s murder, congressional efforts to limit or end U.S. cooperation with the Saudi-led coalition in Yemen risks emboldening Iran and increasing the suffering of the Yemeni people. “[W]e can only help influence a positive outcome in Yemen by engaging with our partners,” then-Assistant Secretary of Defense for International Security Affairs Robert Karem told Congress in April 2018. “Our support shows we take seriously our partners’ struggle against a real security threat to the region – thereby strengthening our broader argument that only a political solution will end the conflict.”

The Saudis’ lack of institutional accountability and lax military culture have contributed to civilian deaths in Yemen. The U.S. must do more to enforce the Saudis’ understanding and application of the Laws of Armed Conflict. Targets must be more carefully vetted, and the Saudi military must do all that it can to avoid harming innocents and to allow for food and humanitarian aid to reach suffering civilians.

I strongly support a political end to Yemen’s conflict as soon as possible, in large part because the Yemeni people don’t have the benefit of time. However, any negotiation that ends in the Houthis taking part in a future government would serve to formalize an Iranian-Yemeni security relationship, harm our long-term security interests, and provide a strong incentive for the Iranian regime to cause other conflicts in the region, regardless of the death and destruction they might wreak.

Even if a ceasefire is struck, we are far from the finish line. Terrorists from AQAP and ISIS-Yemen may seek to exploit a U.N.-brokered ceasefire between the Houthi rebels and the Saudi-led coalition and use terrorist attacks to advance their own agenda. U.S. forces, along with Yemenis and UAE counterparts, have worked hard for years to degrade extremist networks in Yemen and to keep America safe from terrorist attacks. We cannot cede ground in the counterterrorism fight.

While the United States is right to hold Saudi Arabia accountable for Khashoggi’s barbaric murder, we must also squarely face Iran’s central role in perpetuating Yemen’s conflict. Failure to do so risks yielding more war, oppression and misery in the region over the long term. Resolving Yemen’s conflict requires not only ending Iranian and Saudi complicity in the country’s humanitarian tragedy, but also removing Iran’s foothold in Yemen and its ability to destabilize the Arabian Peninsula.