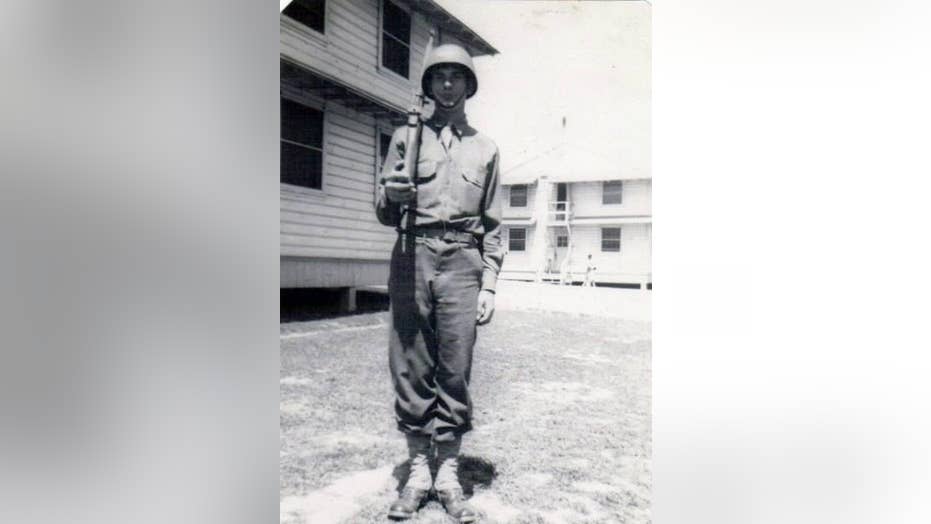 Orba Scott Jr. – my dad, my hero – adopted me when I was a toddler. I never knew my birth father. My mother divorced him when I was born so my brother and I could have a better life. My birth father was abusive to my mother. My mother considered putting my older brother and me up for adoption. I’m glad she didn’t. She eventually married my real dad, the one who adopted me. The one who loved me.

My dad’s story is the story of many in his generation. Born in 1925. Kicked out of his house at 9 because his parents got divorced and neither could afford to feed him. He grew up during the Depression with almost nothing by moving in with family and friends. He joined the Army as a teenager.

He only made it through the sixth grade. But with little education, he still felt a calling to serve his country (plus, it came with a paycheck). It was like pulling teeth to get him to talk about the war. He was quiet, happy and appreciative. He loved watching movie reels of the Second World War.

MEGAN BROWN: SUPPORT MILITARY SPOUSES – HERE'S HOW YOU CAN HELP DURING DANGEROUS TIMES

I remember riding in the car with him once when he heard a loud bang. He immediately ducked and we almost went off the road. This kind of condition did not have a name back then.

When my daughters and my dad were together, I would ask him about the war. He told me the food was terrible and often rationed, he slept in cold, soggy foxholes, and the Germans were horrible. So when I decided to join the military, the Navy was an easy choice – better food and no foxholes. He told me you had to stick together to stay alive.

After the war, he struggled for work. I remember him first as a city bus driver, and then as an always-gone, long-haul truck driver for Navajo Freight. He lost his best friend, my uncle, in a truck accident. We moved from public housing to small house after small house, because we could not afford the rent. When they bought a house, they were always behind on the mortgage. My dad had his car repossessed.

But despite the hardship (or maybe because of it) my dad’s life, and my parents’ life, is the story of America. While they struggled financially, they never complained. They believed that with the grace of God, and a good education and hard work, their children could be anything – could do anything. I felt good when Ann and I were able to start helping them financially. I bought him every book and magazine I could find about the 82nd Airborne.

But I often wonder if he recognized how important he, and those like him, were to the fabric of American society. I think for my dad, a man who never had any financial success, World War II was a time he felt important.

We seldom give credit to the men and women who struggle financially and simply show up, day in and day out, doing the best they can. I think that’s a mistake. They are the foundation of a country that always yearns for more, for better. The forgotten men and women not only must not be forgotten, but they must also be appreciated, valued.

I always loved my dad. I was always proud of him. But as I learned more about what he and others did to make sure we have the freedoms we enjoy, I was even more awe-inspired.

Over the years, I gradually learned more and more about my dad. He was one of the few who did all four combat jumps with the 82nd Airborne in Sicily, Italy, Normandy and Market Garden. He fought in the Battle of the Bulge.

In June, I went to the 75th Anniversary of the Normandy invasion. My father parachuted into France outside of Sainte-Mere-Eglise, ahead of the ground invasion. About 17 percent of his company died there. My father told me he thought about eight of the 80 he went over with came back alive.

Sen. Rick Scott visiting the Ardennes American Cemetery and Memorial in Belgium to pay respects to the thousands of American men and women who lost their lives during World War II.

Last month, I went to Luxembourg for the 75th anniversary of the Battle of the Bulge.

I learned about the German surprise attack on American troops. About how American troops were initially outnumbered three to one. About Germans massacring unarmed American prisoners of war. About the lack of food and medicine. About the bitter cold and snow. About sleeping in foxholes with no winter clothing.

During the Battle of the Bulge, 20,876 Americans died and 42,893 were wounded. We heard about injured American soldiers refusing to leave and staying to fight to free Europe from the yoke of tyranny.

Sen. Rick Scott speaking to a veteran from the 82nd Airborne during a reception commemorating the 75th anniversary of the Battle of the Bulge.

I always loved my dad. I was always proud of him. But as I learned more about what he and others did to make sure we have the freedoms we enjoy, I was even more awe-inspired. As my dad got older, I loved watching war movies with him and seeing his face light up when I handed him another book on the 82nd Airborne.

My oldest grandson is 8 and wants to be a paratrooper. He loves going to military museums. My hope for him is that he gets to live his dream in America.

Freedom is fleeting and worth fighting for. I hope we will never forget the primary goal of the federal government is to provide for the common defense, so our children and grandchildren live in freedom and peace, and our sons and daughters and grandsons and granddaughters never have to fight in the dead of winter for American freedom.