I am mad that rioters think they can burn and trash businesses and property of hard-working Americans. The government buildings burned were paid for with our taxes. Business owners have put in long hours trying to make a living and support their employees and their families. No one has a right to burn or trash our businesses.

I am mad when I hear rioters chant "Death to America.” These are the same chants you hear in Iran.

I am mad when I hear rioters chant “We hope they die” after two law enforcement officers were ambushed and shot in Los Angeles last weekend.

I am mad that rioters are barging into restaurants and demanding we support their political point of view. How dare they interrupt celebrations, terrorize seniors and hurt struggling businesses.

I am mad when rioters try to tear down monuments of our Founding Fathers. Were our founders perfect? Of course not. Neither are we. Our goal should be to improve, not be perfect. I am not perfect and neither are you.

If you commit crimes against others, you should be punished to the full extent of the law. It appears the rioters have no plan or clear agenda; they simply want to tear down our country. That will not happen!

I am proud of this country. We were the first country in the history of the world to try governance of, by and for the people. No other country has done more to promote individual freedom than this country. No one.

I thanked God I grew up in this country. I still do. 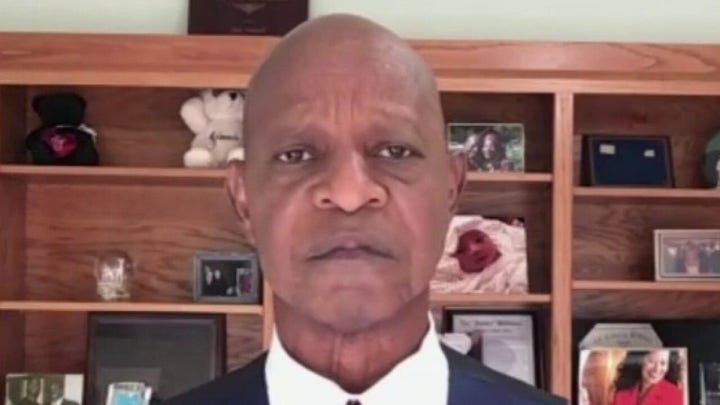 The rioters should protest the general secretary of the Communist Party of China, Xi Jinping, who imprisons citizens for their faith, takes away basic rights of Hong Kongers, harvests organs of minorities and prisoners, and imprisons foreigners for political purposes.

The rioters should protest Kim Jung Un, who imprisons and tortures all who oppose him.

But America, which is one of the few countries that guarantees individual rights, is the country the Radical Left wants to tear down. I am mad and will do everything I can to protect this country.

Life is unfair and terrible things happen. Let's work to make it better.

She never allowed us to complain. She said we were blessed because we were in America, where anything was possible. She said we had to forge ahead even when things were unfair.

Nelson Mandela, after being imprisoned for 26 years, didn't try to burn down South Africa. He spent his life focused on making it better.

Martin Luther King never talked about burning buildings, trashing businesses or threatening people. Mandela and King tried to bring people together, knowing life is unfair and often unjust. They sought to promote fairness and advance the cause of justice.

The Radical Left rioters are demanding we agree with them or they will tear down our country. We should all be mad.

It is time we all say that life is not perfect, but we can make it better by respecting each other and each other's faith, beliefs and property, treating others the way we would like to be treated, working hard, getting up when life is unfair and redoubling our efforts to succeed, voting for better government, and acting in the manner we would like our children and grandchildren to act.

I don't see many of these rioters planning to move to some other supposedly utopian country. So, stop screwing up ours. If you don't like the way America is governed, run for office.

For me, I ran for office to make our country better. I want everyone to have a good-paying job. That will not happen if our companies cannot compete globally because of excessive taxes, fees and regulation.

Socialism sounds nice, but has never worked. If someone believes in socialism, move to a socialist country. People die to get out of Cuba, Venezuela and Communist China. The murderers in the Maduro, Castro and Xi governments will be excited to welcome you into their totalitarian countries.

I want all children to have the chance to get a good education so they can live their version of the American Dream.

I want all communities to be safe. Defunding the police will not make a single community safer. It is a ludicrous proposal.

I am mad and my plan is to fight to save our country. There is no Plan B. There is no place to move to. We all have a responsibility to do our part to preserve what President Ronald Reagan called “this last and greatest bastion of freedom.”

I believe most Americans grew up with moms like mine who believed in the America dream, where anything is possible with hard work. There’s no guarantee but each of us has the opportunity to chart a path of our own choosing.

We will not let the rioters ruin this country and the future for our children and grandchildren.

We will not surrender America to fascist punks or woke elitists who despise everything we stand for. It will not happen.