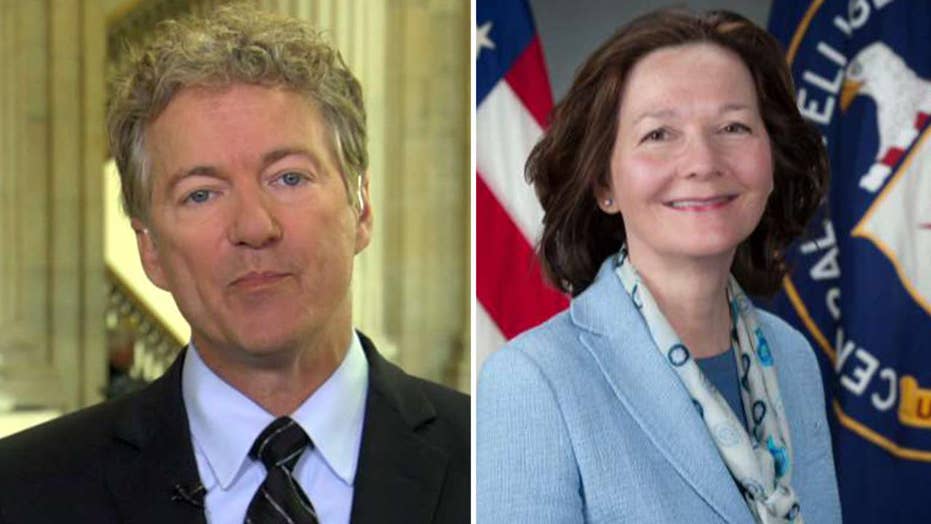 Republican senator from Kentucky says Gina Haspel's connection to waterboarding and enhanced interrogation of terror suspects makes her the wrong person to lead the CIA and sends the wrong message to the world.

Editor’s note: This piece has been updated to reflect a correction published by ProPublica regarding Gina Haspel’s involvement in the interrogation of Abu Zubaydah.

The neocons have been so completely and regularly wrong for decades now that it’s almost unimaginable to believe they would ever be in a position to advise a president again – let alone to wield the kind of power they will have if they lead some of our nation’s most powerful institutions.

Yet the past week has brought such a resurgence of this failed ideology that you would be forgiven for thinking we had time-traveled back to 2003.

Since President Trump took office, we have removed unnecessary and overzealous regulations from the American people’s backs, cut taxes, revitalized the economy and installed constitutional conservatives throughout the federal judiciary – all great and much-needed changes.

The furthest thing from making America great again would be to allow the neocons to have even more influence.

But the furthest thing from making America great again would be to allow the neocons to have even more influence.

According to published reports, Gina Haspel – who President Trump wants to become the next CIA director – oversaw one of the CIA’s notorious “black sites” in Thailand and was directly involved in the destruction of videos documenting the torture that took place there.  One former CIA official has also stated that she was “one of the architects, designers, implementers and one of the top two managers of the [Enhanced Interrogation Techniques program] and a true believer, by all accounts, in the ‘Global War in Terror’ paradigm.”

We’re not simply talking about a run-of-the-mill CIA agent here. Haspel was someone in a position of power who presided over practices that epitomized the abuse of that power. Allowing her to now run the CIA will only invite even more distrust and suspicion of what is going on behind the scenes at the agency.

Going forward, we should be able to know for sure that our CIA director should be someone who would refuse to allow certain methods because he or she knows them to be wrong – not just because they are illegal.

Unfortunately, current CIA Director Mike Pompeo has also defended such actions in the past, once having to apologize to former Senate Intelligence Committee Chair Dianne Feinstein, D-Calif., for saying that the committee’s release of its report on the CIA’s use of torture was “a narcissistic self-cleansing that is quintessentially at odds with (Sen. Feinstein’s) duty to the country.”

Now Director Pompeo is the nominee to follow Rex Tillerson as our next secretary of state, and I still have the same concerns about Pompeo’s appointment as when I opposed his nomination to lead the CIA last year, especially his consistent defense of the National Security Agency’s (NSA) unconstitutional spying programs.

Pompeo even called in a 2016 op-ed for Congress to “pass a law re-establishing collection of all metadata, and combining it with publicly available financial and lifestyle information into a comprehensive, searchable database,” and he has previously stated that NSA whistleblower Edward Snowden should receive the death penalty.

I simply cannot support Pompeo’s nomination to be our chief diplomat.

Rumors have also swirled that former Ambassador John Bolton is being considered for an important foreign policy position in the Trump administration. This would be a catastrophically bad idea.

Bolton has been for all of the wars Donald Trump has been against, most importantly the Iraq war. His policies would have been perfectly at home in a Hillary Clinton administration, but should have no place in President Trump’s White House.

Most disturbingly, Bolton recently called for preemptive war against North Korea, a massive undertaking with potentially horrific consequences for millions. He has doubled down on the decision to overthrow Iraqi dictator Saddam Hussein, which I agree with President Trump only further destabilized the Middle East. And earlier this year, Bolton explicitly stated, “Our goal should be regime change in Iran.”

Of course, Bolton also said obtaining Congress’ approval to use force in Libya and overthrowing dictator Muammar Gaddafi would have been “politically prudent” but “not constitutionally required.…”

President Trump understands the damage previous foreign policy missteps have done, including helping fuel the rise of ISIS, so why should he seek counsel from those who miss the obvious every time?

It has been said that “war is hell” for a reason, and while the realities of the world mean it cannot always be avoided, no one should look to it as a first resort – let alone eagerly cheerlead for its arrival or throw the principles that built this nation out the window to fight it.

The failed neocons’ legacy will not be stability, safety and peace. Following their course will only lead to more chaos and quagmires. It will only create more enemies to threaten the American people and result in more sons and daughters never coming home.

Mr. President, you had it right in your campaign that our foreign policy has been a disaster. Arming the neocons with massive power will only pave the way for more of the same.