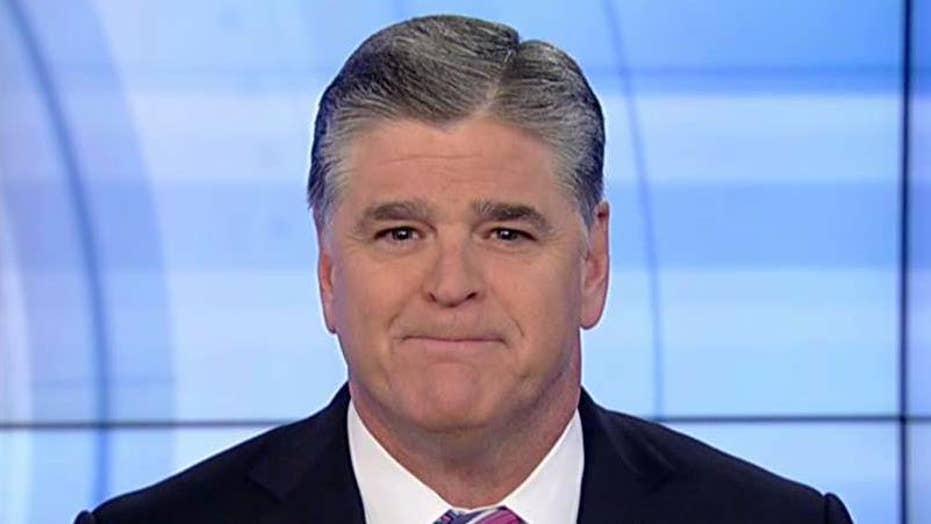 Hannity: Clinton's silence on the dossier scandal is telling

The mainstream media should be demanding Democrats tell the American people the truth.

For more than a year, Democrats and their pals in the abusively biased press have been breathlessly talking about Russia-Trump collusion as if it were the worst scandal in American history.

After a year, the best they can do is somberly insist there is smoke, but no fire. The truth is, there is no smoke. Trump collusion with Russia has been a big lie.

Not that there wasn’t Russian collusion with a 2016 presidential candidate. It’s just that her name was not Trump. We now have real evidence that the FBI uncovered a Russian plot dating back to 2009 that involved bribery, extortion, blackmail, money laundering and racketeering. It all came a year before Hillary Clinton and the Obama Administration approved the corrupt Uranium One deal.

An FBI informant in this case who infiltrated this Putin network right here in America is offering evidence. He has emails, personal recordings and documents. He has insider knowledge that America's national security was compromised at the highest level. Our country was sold out, right in front of our faces. Clinton and Obama let it happen.

We have evidence of another Russia scandal, also involving a 2016 candidate not named Trump. We now know that the Clinton campaign and the Democratic National Committee paid over $9 million to help fund the discredited, Russia-linked dossier crafted to ruin then-candidate Donald Trump. This was nothing short of a collaborative effort with the Russians to manipulate the outcome of the last presidential election.

You might think that the media, which has hungered for evidence of a Russia scandal for over a year might be excited to finally have real evidence of not just one, but two cases of Russian collusion. Yet, they are giving next to zero coverage to this story.

We all know they are only interested in Russian collusion if they can pin it on President Trump. That should mean proving that he was somehow involved in the WikiLeaks release of Democratic Party big shot John Podesta’s emails. But then, there is one man Special Counsel Robert Mueller or anyone in the media could talk to who could tell them where those emails came from: Julian Assange.

Assange knows where he got those emails and whether it had anything to do with Russia or Donald Trump. I've talked to him now on air five times. But no one else has, because he has been clear: He did not get the emails from Russia. Sorry Democrats. Sorry propaganda media.

These scandals, lies and cover-ups are brought to you by a mainstream media blinded by its hatred of President Trump and contempt for the truth and the American people. We have been regularly lied to. We have been misinformed. We have been propagandized by a political party and abusively biased liberal media that have literally no interest in helping the people in this country or telling the truth.

To them, everything obviously is about politics and about advancing their rigid, radical left-wing ideology.