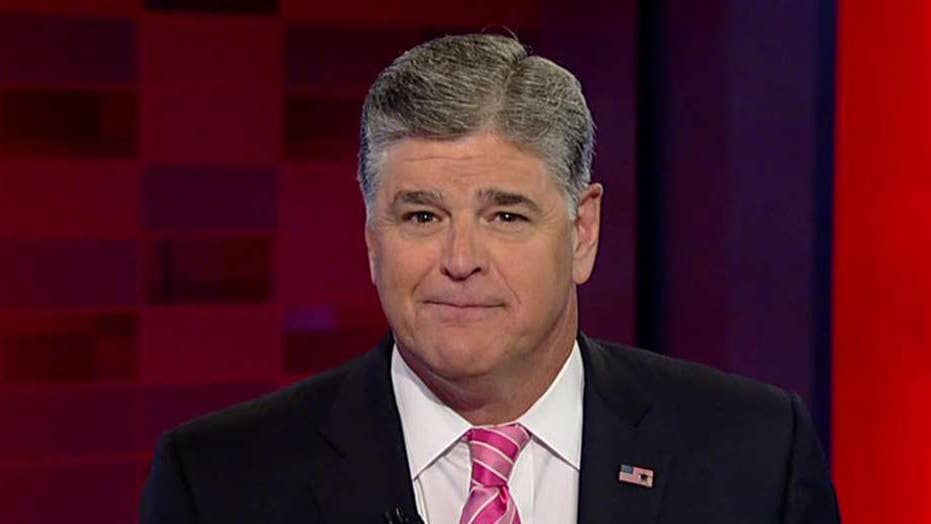 Hannity: BuzzFeed is a propaganda arm of Democratic Party

The liberal, alt-left media is in meltdown mode because Donald Trump put them on notice that he's not going to take their BS anymore.

The president-elect called out members of the mainstream media who ran with a bogus story based on a phony dossier that purported to include compromising information on him. In fact, the whole story was just an excuse for these disgraceful  organizations to print unconfirmed smears – and Trump saw it for what it was.

“It's all fake news,” he said at a press conference this week. “It's phony stuff. It didn't happen.

“I think it's disgrace that information that was false and fake and never happened got released to the public,” he added. “As far as BuzzFeed -- which is a failing pile of the garbage -- writing it, I think they're going to suffer the consequences. They already are.”

And now, the media is pretending to be shocked that the president-elect slammed BuzzFeed and CNN over their stories. But here's what the corrupt media will not tell you: BuzzFeed is nothing more than a political propaganda arm of the Democratic Party. In June, the website terminated an advertising deal with the Republican National Committee because, as their CEO said, "The Trump campaign is directly opposed to the freedoms of our employees in the United States and the world."

Two days later, BuzzFeed’s chairman, Kenneth Lerer, hosted a $33,000-a-ticket Democratic National Committee fundraiser in New York City that President Obama attended. Lerer already had a long history of donating to Democrats – since 2004, he's contributed almost a half a million dollars to Democrats, including $2,700 to Hillary Clinton in 2016.

It should be no surprise that, even after being exposed by President-elect Trump, BuzzFeed editor-in-chief Ben Smith is standing by the decision to publish what amounts to fake news in a desperate attempt to smear the next commander-in-chief.

“I think people love to throw the term "fake news" around to diminish anything they don’t like,” Smith told NBC’s Chuck Todd. “But I think this was a real story about a real document that was really being passed around.”

In that interview, Todd mentioned that NBC Universal has direct ties to BuzzFeed, even though he said their news divisions are, "separate." NBC Universal has invested $400 million in BuzzFeed over the last two years, according to Bloomberg. What we're dealing with here is a giant, corrupt media swamp. They're all interconnected and work together to advance their alt-radical leftist agenda.

Trump also blasted a CNN reporter who rudely shouted questions and demanded answers at the news conference until Trump shut him down, declaring that the “Clinton News Network,” like BuzzFeed, is a purveyor of “fake news.” The media was aghast that Trump would dare lash out at a media that WikiLeaks proved secretly colluded with the Democratic Party, allowing its leaders to edit their stories, giving debate questions in advance to Hillary Clinton and now, publishing unvetted lies about Trump.

Yet for years, the radical alt-left media was silent when President Obama attacked me, Rush Limbaugh and Fox News.

“There's a reason few Republicans, you hear them running up around about ObamaCare,” said on Oct. 2, 2014. “Because while good, affordable health care might seem like a fanged threat to the freedom of the American people on Fox News, it turns out it's working pretty well in the real world.“

Or how about this, on June 1 of last year: “And I haven't, you know, turned on Fox News or listened to conservative talk radio yet today, but I turned them on and off over these past seven-and-a-half years to know I am not exaggerating in terms of their story.”

And four days before the election last year, Obama told HBO’s “Real Time,” that “the problem is, we’ve got all these filters,” he said. “And look, if I watched Fox News, I wouldn't vote for me either, right, because, you know, you've got this screen, this funhouse mirror through which people are receiving information.”

Obama attacked me personally on 15 separate occasions, but he finally stopped when someone pointed out to him that I considered the attacks a badge of honor, and used them in the introduction of my radio show.