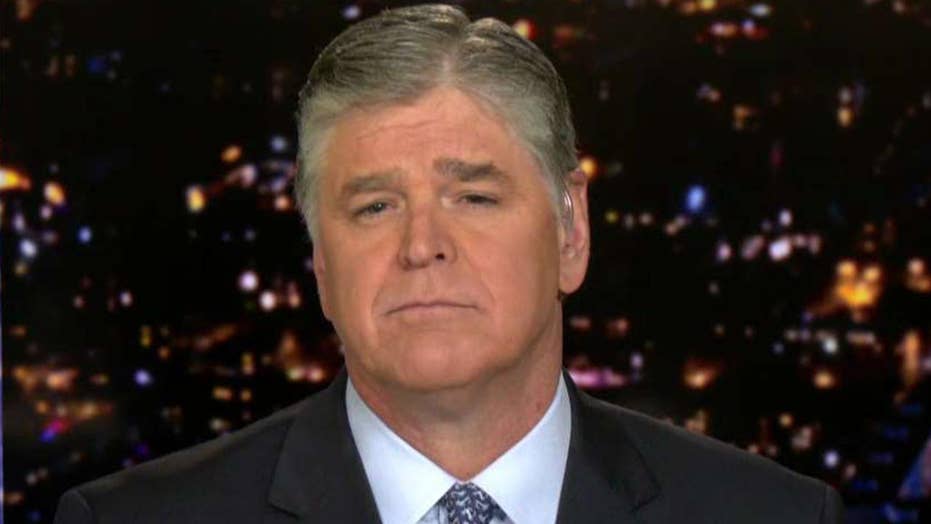 The Democrats' crazy train has yet another passenger: Joe Biden. After delaying his launch and delaying it again, 'Crazy Uncle Joe" has finally jumped into the 2020 race. He is now the 20th Democrat running for president. That's a record.

What's going to happen next will be pretty remarkable as Biden tries to court the new ultra-radical, extreme socialist left Democratic Party and convince them that he's their guy. But even the bigger story is overseas - in what's surrounding Biden's shady involvement with Ukraine.

The Hill's John Solomon explained on "Hannity" that while Biden was vice president, his son Hunter took a lucrative job at a major Ukrainian energy company. But when the company became the subject of a corruption probe in Ukraine, Biden used his influence and your money to literally get the lead prosecutor fired -- and bragged about it.

As Solomon reported, the prosecutor was actually investigating Biden's son. And Biden used the threat of pulling U.S. aid dollars - your tax dollars - if they didn't fire the prosecutor.

This is a huge developing story. This is what Biden said on tape:

We have been reporting on Ukraine attempting --- and admitting they tried to --- influence the 2016 election. They are offering this country the evidence on behalf of Hillary. The question now is where are all the people that are so worried about collusion?

Beyond Biden's shady international dealings, he faces an uphill climb in his presidential campaign and is already doing everything he can do to try and cozy up to the far-left of his party.

Despite Biden's attempts to appease this far-left radical socialist base of the Democratic Party, they are already sounding the alarm against him.

"I believe history will look back on four years of this president and all he embraces as an aberrant moment in time," he said in his campaign rollout video. "But if we give Donald Trump eight years in the White House, he will forever and fundamentally alter the character of this nation -- who we are. And I cannot stand by and watch that happen."

"Who we are?" Record low unemployment for African-Americans, Hispanic-Americans, Asian-Americans, women in the workplace -- and youth unemployment. We have literal wage growth, which had been stagnant for 10 years. Really? Now it's back better stronger than ever.

Despite Biden's attempts to appease this far-left radical socialist base of the Democratic Party, they are already sounding the alarm against him. Now in a new tweet from the group Justice Democrats, the same group behind the rise of Congresswoman Alexandria Ocasio-Cortez, the group wrote, "Biden is out of touch with the centered energy in the Democratic Party today."

And don't forget, Congressman Ocasio-Cortez already went firmly on the record. She does not want Biden to be the nominee, saying, "This idea that we can go back to the good old days with Obama, with Obama's vice president I think, you know, there is an emotional element to that. But I don't want to go back. I want to go forward."

An article from the liberal website "Slate" compared Biden to Jeb Bush, calling him a weak establishment candidate. And an Associated Press headline reads, "Some women of color frustrated Biden's presidential bid. This raises even more questions about his campaign's appeal, based on past statements on integration and busing.

In addition, it looks like Biden may not even have the backing of his old boss, Barack Obama, who has not endorsed him yet. And the best part is how Uncle Joe is trying to spin thisl, uncomfortable truth. "I asked President Obama not to endorse and he doesn't want to -- we should -- whoever wins this nomination should win it on their own merits."

Well, let not your heart be troubled, Joe, because a big coveted endorsement is already rolling in. Disgraced, indicted former media darling Michael Avenatti tweeted support of Biden, saying, "He offers Dems the very best chance in 2020 especially in key states. He has the fight, intelligence, fortitude to beat Trump and begin to make America, America again. He has my enthusiastic support."

Remember, Biden enters the race already trying to fend off scandal after scandal. Multiple women have accused him of inappropriate touching, kissing, touching, with actual video footage of Biden's disturbing touching antics. Doesn't this alone immediately disqualify, in the eyes of the Democratic Party?

If Biden was a Republican, what would they be saying? The double standard is on full display.

Adapted from Sean Hannity's monologue from "Hannity" on April 25, 2019.