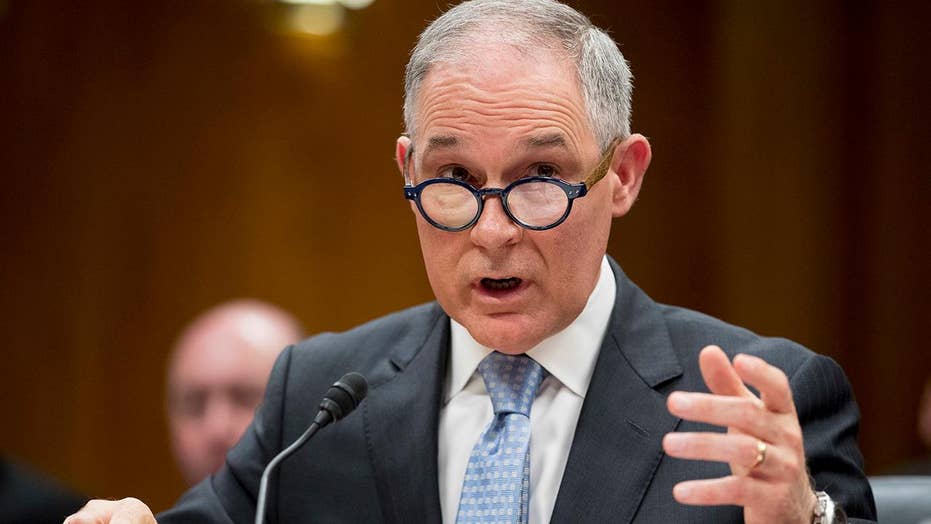 Were stories on EPA chief accurate?

Scott Pruitt, who lost his job as head of the Environmental Protection Agency last week after a flood of complaints and investigations regarding his conduct and ethics, nevertheless accomplished a great deal to institute needed reforms at the agency and roll back harmful and counterproductive over-regulation.

Whatever you think of how Pruitt conducted himself personally, he leaves a positive policy legacy behind from his tenure at EPA. Deputy Administrator Andrew Wheeler – who becomes EPA acting administrator Monday – seems sure to continue and build on these achievements.

Let’s get one thing clear. Despite the claims of Democrats and environmental extremists who regularly demonize those of us who believe in evidence-based regulation, limited government and the free enterprise system, we all want a clean and healthy environment – Pruitt, Wheeler and other Republicans included.

But since its inception during the Nixon administration, EPA has been a mess – corrupt, incompetent and disdainful of science. Pointing out its many failings and calling for reforms does not make critics like me anti-environment, or make us opposed to clean air and water. It makes us proponents of good government and the wise use of taxpayer dollars.

The reality is that EPA has been a bureaucratic cesspool for decades. Policy by policy and decision by decision, EPA has damaged our nation’s competitiveness, ability to innovate and capacity to create wealth.

EPA has been a prime example of an out-of-control Big Government regulator that spends more and more to address smaller and smaller risks. In one analysis by the Office of Management and Budget, of the 30 least cost-effective regulations throughout the government, EPA had imposed no fewer than 17.

The agency’s ever-expanding regulations have imposed huge costs on American businesses and, ultimately, on consumers. An analysis by the Competitive Enterprise Institute estimated that compliance with EPA regulations costs the U.S. economy more than $300 billion annually – a staggering regulatory burden.

Regulatory excesses and well-intentioned mistakes are one thing – dishonesty and mendacity are something else.

Unnecessary, ill-conceived regulatory costs imposed on job-creating businesses inhibit innovation and make it less likely that companies will be able to take risks that could produce the Next Big Thing.

It would take a book – make that several books – to list all the abuses, errors and regulatory excesses of EPA since the agency was founded in 1970.

One such book was “Breaking the Vicious Circle,” written by none other than Supreme Court Justice Stephen Breyer when he was a lower court judge. In it, he addressed the EPA’s counterproductive efforts to eliminate the “last 10 percent” of risk from a substance or activity, noting that it involves “high cost, devotion of considerable agency resources, large legal fees, and endless argument,” with only limited, incremental benefit.

Let me cite a small number of additional, brief examples.

EPA has long maintained a stable of outside advisers made compliant by grant money. Making grantees advisers to EPA creates a serious conflict of interest, because grantees want to keep collecting more and more money from the agency. So when they serve on advisory committees, the grant recipients are often only too willing to rubber stamp the agency’s unwise, unscientific and excessive regulation.

To remedy this situation, Pruitt announced last October that EPA would no longer permit grant recipients to serve on advisory committees that evaluate EPA's programs and policies.

One of the EPA’s most egregious recent policy excesses was to redefine “navigable waters,” for the purpose of regulating them under the Clean Water Act, to include virtually every body of water in the nation right down to the smallest of streams, farm ponds and ditches. However, under an executive order from President Trump, that travesty will be reversed.

At the behest of activists, the EPA has unilaterally killed off entire, once-promising sectors of U.S. research and development. The use of genetically engineered microorganisms for bioremediation – the biological cleanup of toxic wastes – is one.

Why should you care?

Because accidents that cause oil spills are inevitable as long as they can be caused by human or mechanical failures or the vagaries of weather. During the 1980's, microorganisms genetically engineered to degrade spilled oil were developed in laboratories, but draconian EPA regulations discouraged their testing and commercialization. As a result, techniques available for responding to these disasters remain low-tech and only marginally effective.

Regulatory excesses and well-intentioned mistakes are one thing – dishonesty and mendacity are something else.

A con game that has received attention from the Senate Environment and Public Works Committee is the “sue and settle” maneuver that EPA has frequently used to advance a radical environmental agenda that gets around the need for legislation and agency rulemaking to make policy.

Here’s how it has worked: Extremist environmental groups (some of which receive government grants) sue the federal government, claiming that federal agencies are failing to meet their statutory obligations. And then – behind closed doors, with a wink and a nod – the activists and regulators concoct a settlement agreement that furthers activists’ (and regulators’) radical goals that go beyond what Congress authorized in passing laws.

This “sue and settle strategy” circumvents both congressional intent and the rulemaking process. Pruitt directed EPA to stop this practice.

Government use of social media is not unlawful, and many agencies use it to communicate their actions and policies to the public. But EPA crossed the line when it asked members of the public to share EPA-composed propaganda on Facebook or Twitter without attributing it to the government.

Neglecting to reveal the source was the basis of the “covert propaganda” violation, because the law says that citizens must know when messages presented to them were created by their government.

Here’s yet another example of EPA abuses: Federal agencies are supposed to be apolitical, and federal law prohibits lobbying for or against proposed legislation. But an EPA blog post contained links to websites that encouraged members of the public to, for example, “urge your senators to defend Clean Water Act safeguards for critical streams and wetlands.” This “grassroots lobbying” was a violation of federal law.

Another underhanded ploy, exposed several years ago, would have diverted EPA “research” funds to pay outside public relations consultants up to $5 million over five years to improve the website of the Office of Research and Development, conduct focus groups on how to polish the office’s image, and produce ghostwritten articles praising the agency “for publication in scholarly journals and magazines.”

This payola scheme is similar to the agency’s longstanding practice of buying influence by doling out hundreds of millions of dollars each year to certain favored nonprofit organizations – money that, according to the EPA inspector general and Government Accountability Office, is dispersed with no public notice, competition or accountability.

EPA's incompetence is legendary. A typical incident occurred in August 2016, when an EPA cleanup crew accidentally triggered a breach in an abandoned gold mine in the southwestern part of Colorado, spilling 3 million gallons of highly toxic mining waste that contaminated waterways in Colorado and New Mexico. Inexplicably, EPA officials failed to warn downstream public health and environmental regulators in a timely way.

For decades, the EPA has been a rogue agency – ideological, poorly managed, dishonest and out of touch with sound science and common sense. Under President Trump and Scott Pruitt, things have changed for the better. Let’s all hope this progress continues.