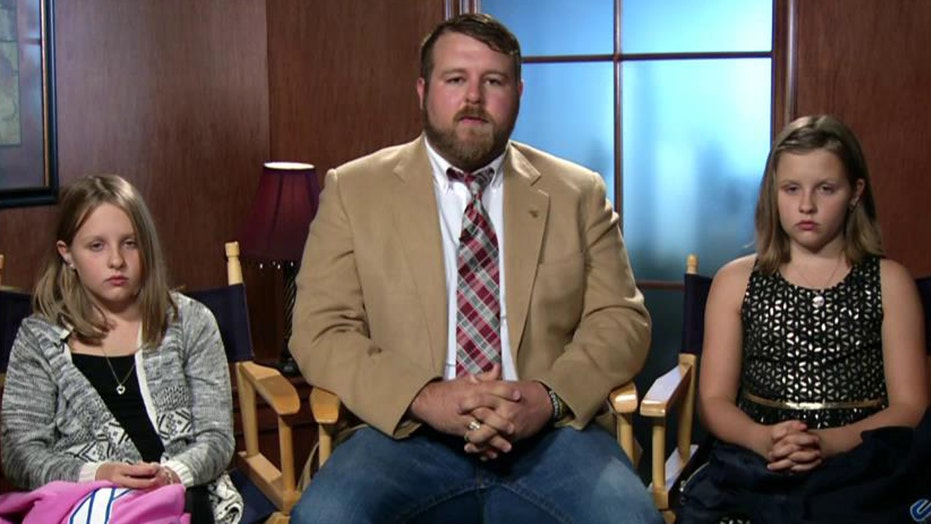 It was known as the wild blue blunder.

A Texas school district has decided to reverse a controversial ban on large military logos. The reversal came 12 hours after I told you the story of two girls who were ordered to remove jackets that were emblazoned with large Air Force logos.

Aubrey Independent School District Superintendent Debby Sanders sent me a message just before midnight telling me she had just concluded an indepth review of the school’s dress code.

“These girls were born on an Air Force base so you can imagine my reaction,” Mr. Rolen told me. “It’s absurd.”

“The administration of the school district was dead wrong on that,” Phillip Rolen told Fox & Friends. “We were proud they made the decision to reverse their decision.”

Last week, the principal at Aubrey Middle School threatened to punish his 11-year-old daughters because they refused to remove their jackets adorned with the super-sized Air Force logos.

“The teacher had told me to take it off,” Kaidence told Fox & Friends. “I was really offended by that.”

According to the district, all logos must be smaller than 1 ½-inch by 1 ½ inches. Outerwear that has larger logos must be left in lockers during school hours.

“These girls were born on an Air Force base so you can imagine my reaction,” Mr. Rolen told me. “It’s absurd.”

Mr. Rolen and his wife are Air Force veterans who raised their daughters in a “pro-military environment.”

“I’m patriotic,” he said. “Military tradition is rich in our family.

Superintendent Sanders wants our readers to know they hold no ill will towards the Armed Forces.

“Aubrey ISD wholeheartedly supports the men and women of our armed services and our military veterans who have given so much for their country,” she wrote. “It is our honor and our duty to support our men and women in uniform and Aubrey ISD will continue to do so.”

So there you have it, folks.

Thanks to your poking and prodding the Aubrey Independent School District changed their policy. You righted a wrong. Well done, America.