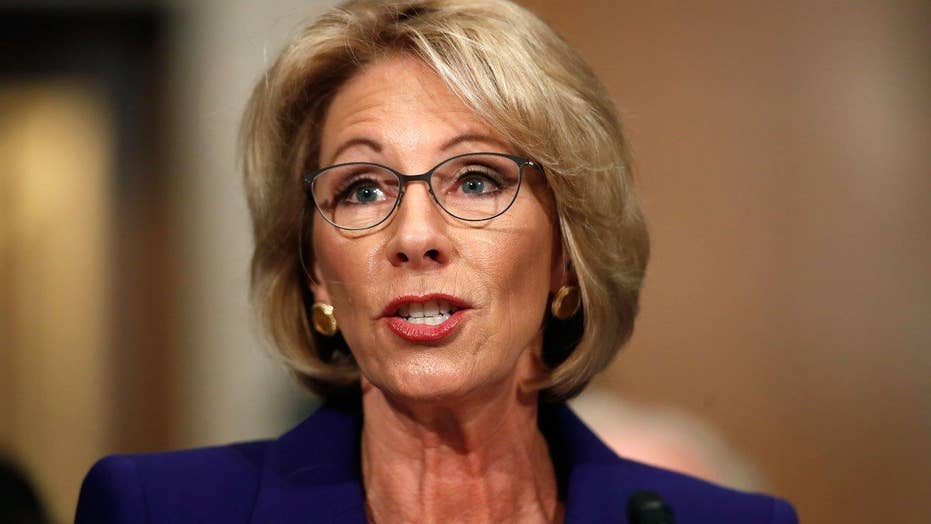 Why not Betsy DeVos for education secretary?

Trump nominee DeVos, a pioneer in the school choice and charter school movements, has a few opponents to proposed job as education secretary and Tucker takes on one of them #Tucker

A recent poll from the American Federation for Children found that more than two-thirds (68 percent) of Americans support school choice. And a recently released study from Harvard’s Albert Cheng and Paul Peterson found that parents are the most satisfied when they can choose their child’s school—be it private, charter, or public. They are the least likely to report high levels of satisfaction when their children attend assigned public schools. Research from Patrick Wolf at the University of Arkansas has demonstrated that education choice moves parents from the margins to the center of their children’s education.

But you don’t need a litany of academic studies to understand the heart of school choice: parents should be free to choose what works for their children. As Milton Friedman argued, public education does not have to mean government schooling. Indeed, school choice separates the financing of education from the delivery of services, empowering families to choose options that are best matched to their children’s unique needs.

At the federal level, there are limited opportunities to advance education choice. There are, however, a few options that DeVos—and Congress—should pursue. That includes making K-12 expenses eligible for the same tax treatment given to higher education expenses in federal 529 college savings plans.

The next administration should also support and expand the D.C. Opportunity Scholarship Program – the wildly successful school voucher program in the Nation’s Capital. And the incoming administration should support choice for military families and children attending Bureau of Indian Affairs schools. The latter are the worst performing in the country and a national disgrace.

During the confirmation hearing, DeVos voiced support for offering students a wide variety of higher education options, including career and technical education, apprenticeships, and online learning. Offering a variety of options is important. As Sen. Tim Scott, R-S.C., asserted, America has an unhealthy “bachelor’s degree addiction.”

Unfortunately, our outdated accreditation system, heavily controlled by the Department of Education, prevents true innovation from flourishing in the higher education sector. Policies contained in the Higher Education Reform and Opportunity Act championed by Sen. Mike Lee, R-Utah, and Rep. Ron DeSantis, R-Fla., would create an alternative accreditation system that would open the doors of innovation to all students.

When asked whether she plans to support free public college, DeVos responded that, “nothing is free.” She’s right. “Free” public college only shifts the financial responsibility of paying for college from the students to the taxpayers.

The Government Accountability Office recently reported that U.S. taxpayers are already holding an enormous bag for college students. Over the next 10 years, they will have to pick up the $108 billion tab for student loan “forgiveness.” Placing even more of a financial burden on taxpayers while increasing subsidies that inflate college tuition will not solve the underlying college cost problem.

A better path forward would be to address why college costs are soaring. Evidence suggests easy access to federal student loans may be a significant contributor to increases in prices at universities, which have risen at a rate twice that of inflation. And with the federal government now originating and managing 93 percent of all student aid, taxpayers bear the burden when defaults occur. Switching back to a private lending system would be an efficient way to bring college costs down to an affordable level, while tailoring loan options to the needs of individual students.

As DeVos noted during the hearing, education should not be about specific systems and arrangements. That holds true for both K-12 and higher education. The incoming administration should take the opportunity to make funding student-centered and portable, while at the same time beginning the important work of restoring control of education to state and local authorities and to parents.

Lindsey M. Burke is the Will Skillman Fellow in Education Policy and Mary Clare Reim is a research associate at the Heritage Foundation.