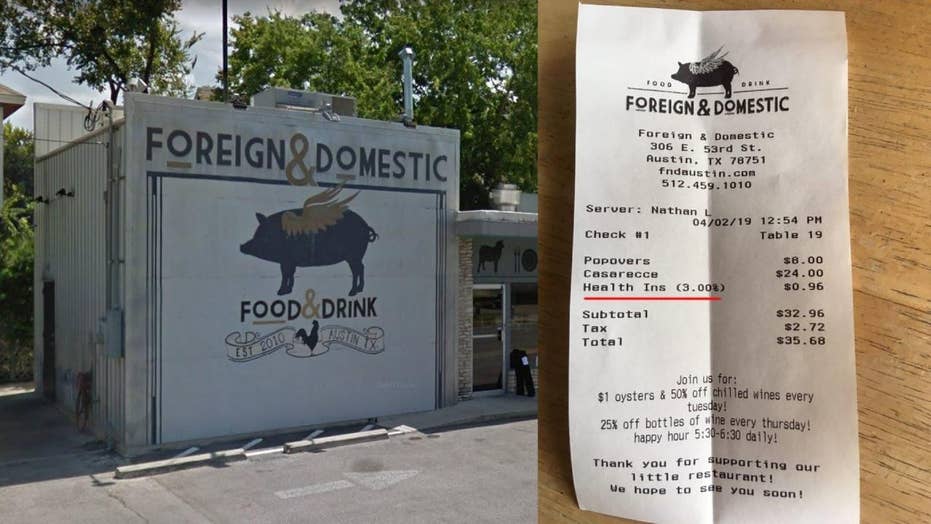 A growing number of restaurants are embracing the trend of putting health care surcharges on diners' checks.

I had quite an experience in Girona, Spain about an hour north of Barcelona. I ate dinner at El Celler De Can Roca, the top-rated restaurant in the world.

The waiting list for reservations is one year. I put my name in three months ahead but to no avail. But a concierge with American Express was somehow able to land us a reservation.

My wife and I are not foodies. And she was raised in a family of nine people so she is not comfortable spending a lot of money on dining out. It was the most we’ve ever spent on a dinner but not nearly as much as you would think for the best restaurant in the world. We don’t drink alcohol so that certainly helped.

IN WAR AND IN LIFE, SUCCESS DEPENDS ON A PLAN

My purpose for going was not really the food. In fact, the meal lasted almost four hours and I am a notoriously fast eater. There were many courses, each of them small portions of food.

Excellence is not an accident. It is intentional. Being the best takes more than hopes and wishes. But it can be done. If you want to be the best, excellence is the way.

I wanted to see for myself what makes a restaurant the best. What set them apart not just in Spain or even Europe but the entire world. And I was not disappointed.

It is simply one thing — excellence

How can you be excellent? Here are four ways practiced by El Celler De Can Roca. And you can practice them too.

High standards indicate you value excellence. Unless excellence means something to you there will never be excellence in your life or work. Anyone can accept average in a world of mediocrity only the excellent set a standard for something more.

When we first arrived, the staff gave us a tour of the kitchen. I’ve never worked in a restaurant but I’ve seen a few kitchens on tv shows and they didn’t look anything like this. It was immaculate. There was no mess, no chaos, just order and work.

In fact, the entire place was beautiful, elegant and serene. Even the bathroom was hidden behind a glass door. The furniture had clean lines, the ambient light was plentiful and there were trees in a garden setting. The entire atmosphere set the tone for a special evening.

When we received our menu, it was prix fixe with only two options. Of course, there were many courses but only two choices. Too many miss excellence by trying to do too much. You can do anything but you can’t do everything. Choose what you will be the best at and then set your excellence standard.

Enthusiasm always makes a big difference. People who practice excellence are enthusiastic about what they do. Whether the job is big or small enthusiasm will cause you to always give your best effort. Whenever you put your whole heart into what you’re doing nothing can stop your enthusiasm from being revealed.

From the moment we were greeted you could sense the enthusiasm in the place. Our first server was so happy and excited to share this special dining experience with us. She elevated our expectations even more by her enthusiasm. She gave us the menu and instead of defending the fact there were only two options she made it seem great to either choose their classic course or try their seasonal one.

The four servers we all had the same level of enthusiasm. Their passion for the food was obvious. Their work was not drudgery but joy. Even when I told them I didn’t drink wine they came out with juices and shared how they imitate the interaction like the wine would.

The difference between good and great is always the little things. It’s the details that make the difference. And it’s not about being a detailed-oriented person, it’s making sure that proper attention is paid to the small stuff. When you are prepared and you know your material you have excellence.

One of the most remarkable parts of our dinner was that every single course was served on a unique plate. And there were fifteen courses. The purpose for each dish was tied to the name given to each serving. Each course had a perfectly matched plate that conveyed the meaning of what we were eating.

Most impressive to me was how the meal began. A globe was brought out with five little servings at the end of levers. We were told they represented different countries but that two were not identified. We had to guess which one matched which country. When you guessed right and moved the lever the top of the globe opened up revealing one more serving.

Do more than expected

You will never be excellent just doing what is expected. It’s exceeding expectations that leads to excellence. Jesus taught this when he said, "If anyone forces you to go one mile, go with them two miles." The extra mile is where excellence is found. There is never a traffic jam on the extra mile.

You certainly have expectations when you go the top restaurant in the world. But they exceeded my expectations. It is clear that at El Celler De Can Roca, thought is given to everything they do. Their goal is clearly to be the best. They treat food as art and it is beautiful to see.

One of the three brothers who own the restaurant even came out to meet me. I had commented on a picture of him as a boy wearing a New York Yankees shirt. As a Red Sox fan myself, I felt it necessary to lodge my objection. We had a fun chat, and he assured me his allegiance could easily be changed with a new shirt.

Excellence is not an accident. It is intentional. Being the best takes more than hopes and wishes. But it can be done. If you want to be the best, excellence is the way.