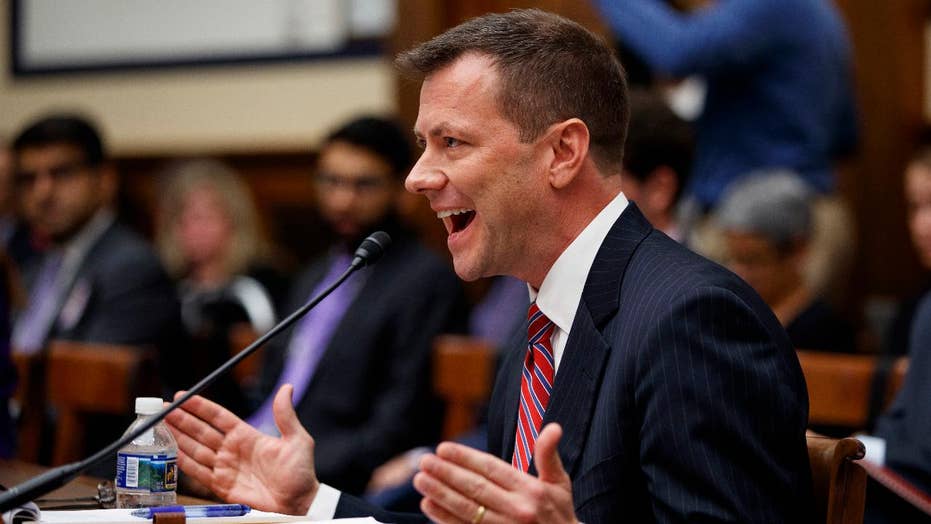 Breaking down the fallout from the fiery Strzok hearing

U.S. House members proved Thursday that they are more interested in political posturing and getting on TV with fiery soundbites than in fact-finding, as they questioned FBI official Peter Strzok about whether his anti-Trump bias influenced the investigation of the Trump presidential campaign for possible collusion with Russia.

Acting like they were cast members on a reality TV show – yelling, interrupting each other, and hurling insults – members of the House Judiciary and Oversight Committees spent almost 10 hours alternately attacking and defending Strzok, a suspended FBI deputy assistant director.

The cable news networks televised the wild hearing, as Republicans led the attack on Strzok and Democrats defended him.

Strzok will likely be fired from the FBI in coming weeks for his disgraceful conduct at the agency, where he worked on Special Counsel Robert Mueller’s probe of Russian interference in the 2016 U.S. presidential election campaign. He also headed the FBI team that investigated the email scandal surrounding Democratic presidential candidate Hillary Clinton.

Rather than getting a platform to speak to the nation in a daylong TV performance, Strzok should be summarily dismissed from the FBI, thoroughly investigated and prosecuted if the evidence shows he has broken the law.

Mueller removed Strzok from the Russia investigation last year after learning of numerous rabidly anti-Trump and pro-Clinton text messages that Strzok traded with his then-lover Lisa Page, who was an FBI lawyer at the time.

The texts made it crystal clear that Strzok and Page despised Donald Trump and wanted Hillary Clinton to defeat him in the 2016 presidential election.

In one text exchange, Page wrote to Strzok about Trump: “He’s not ever going to become president, right? Right?!” Strzok replied: “No. No he won’t. We’ll stop it.”

Strzok also said in a text that there was an unspecified “insurance policy” that would keep Trump out of the White House.

Strzok admitted at Thursday’s hearing that he “detested” Trump. However, he insisted vehemently and repeatedly that his personal political views had absolutely no impact on his conduct at the FBI in the investigations involving either the Trump campaign or Clinton. He said he had taken no improper action regarding either probe.

These claims are unbelievable and contradicted by the facts regarding Strzok’s conduct.

As an FBI agent for 24 years and former chief of all FBI criminal investigations, I was disgusted by the way Strzok tried to cloak himself in the FBI and characterize attacks against him as attacks against the FBI as an institution.

Strzok did his best to fuse himself to the good and dedicated men and women of the finest law enforcement agency in the world, but the truth is that his shabby conduct has done more to damage the FBI than any one person in its storied history.

Scores of current and retired FBI employees who gave their all to the organization have expressed to me that they deeply resent being unfairly forced to deal with the consequences of Strzok’s bad behavior.

For all the drama, fire and fury, the House hearing shed no new light on Strzok’s conduct at the FBI. It did, however, demonstrate the general uselessness of Congressional hearings.

Rather than uncover facts for their constituents, the hearing resembled a cross between “The People’s Court,” “The Jerry Springer Show,” and the trash talk between competitors at “WrestleMania.”

The sad truth is that in the Republicans’ zeal to administer a public flogging of Strzok – and by extension the FBI – the GOP House members walked right into a trap.

The hearing never had a chance of uncovering the truth. This is so because Strzok enjoyed the advantage of being able to shower the committees with self-serving protestations while hiding behind the restrictions on his testimony imposed by the FBI attorney hovering behind him.

Strzok understood this and exploited his opportunity to the hilt while snuggling up to the anti-Trump Democrats embracing him.

The savvy Strzok cleverly outmaneuvered the Republicans on the committees. That’s surprising, given the extensive experience of Oversight Committee Chairman Trey Gowdy, R-S.C., as a former federal prosecutor. Gowdy should have known better than to take the bait.

The Republican members succeeded only in turning Strzok into a Democratic hero and giving him a national audience for his emphatic denials of Republican allegations that his anti-Trump and pro-Clinton political allegiance influenced his investigations involving the two candidates.

Not only did the Republican committee members fail to recognize Strzok’s public relations trap. They allowed Strzok’s former lover Lisa Page to delay her committee appearance – originally scheduled for Wednesday – until after she had ample opportunity to observe his televised testimony. All Page has to do now is tailor her answers to match Strzok’s.

This is a circus that only lacks a big tent.

Gowdy should have known that there was zero chance of a “Perry Mason” moment like those featured on the old TV show about a defense lawyer, when Strzok would break down under the withering questions of GOP members and confess to placing his thumb on the scale of the investigations.

Strzok is no dummy. He was not going incriminate himself at the hearing to set himself up to be charged with obstruction of justice for improperly influencing the investigations of the Trump campaign or the Clinton emails.

It also appears that Gowdy failed to anticipate the coordinated strategy of the Democratic members to obstruct the hearing and run interference for their new hero, who they painted as a patriot and noble martyr who sacrificed his FBI career for the good of the nation.

The simple and uncontroverted facts concerning Strzok’s actions and expressed intent can be found in the recent report by Justice Department Inspector General Michael Horowitz that was thorough and detailed.

Horowitz ultimately came to the wrong overall conclusion, but did state that investigators had no confidence that Strzok did not improperly influence the Clinton email investigation by ignoring relevant evidence.

The Horowitz report described how Strzok, as the head of the Clinton email investigation, sat on his hands for well over three weeks after the New York FBI office reported to him that it had discovered new evidence relevant to the Clinton investigation.

This – when matched with Strzok’s contemporaneous statements – appears to amount to, at minimum, obstruction of justice. It would not be a stretch to convince a jury of 12 that Strzok’s expressed intent to improperly change the course of the investigation was accompanied by actions.

While Strzok’s testimony was uninformative, his arrogant and smug demeanor and feigned outrage during his testimony spoke loudly to anyone who observed it objectively. Does he really think we are so gullible that we would buy his absurd claim that his “we’ll stop it” text meant all of us – the American people – would act to stop Trump from becoming president?

Rather than getting a platform to speak to the nation in a daylong TV performance, Strzok should be summarily dismissed from the FBI, thoroughly investigated and prosecuted if the evidence shows he has broken the law.