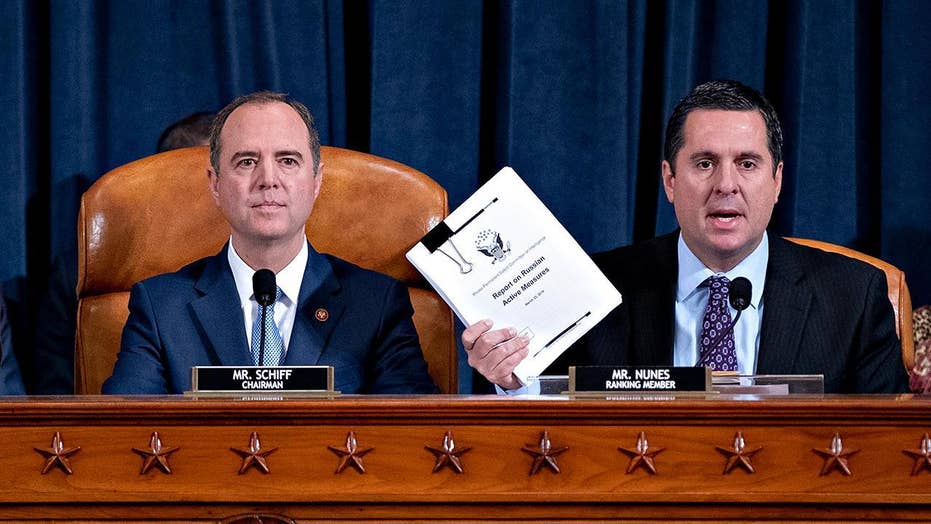 If we have learned anything in the last two weeks, it is the reality of the deep state, or swamp. Democrats have been relentlessly attacking President Trump since his election. They have been joined by the Washington establishment that includes much of the media, bureaucracy and the executive branch itself.

For instance, a cadre of career diplomats has come to the House Intelligence Committee to testify against President Trump in the impeachment inquiry the House is conducting.

Let’s take Dr. Fiona Hill, who formerly worked at the National Security Council, for example. Of course, like all witnesses, her credibility and veracity are to be judged by her testimony and demeanor. As a witness gives “evidence,” those in the public and jury determine whether her testimony is accurate or if she is exaggerating or even lying.

VICTOR DAVID HANSON: DEMS TRYING TO IMPEACH TRUMP OVER 'THOUGHT CRIMES,' BUT HAVE 'NOTHING'

Hill proclaimed herself a “fact witness” who was ambivalent to the outcome of the impeachment proceedings. Yet her opening statement includes a number of things that belie her stated aloofness.

She asserted that there were those on the committee who had rejected the fact of Russian interference in the 2016 U.S. presidential election. But this is false. Hill was repeatedly and demonstratively proven wrong on this important point.

Hill had no response when shown the report written by Republicans that specifically stated that as early as 2015 Russian operatives had begun to attempt to influence our 2016 election.

Hill further claimed that there were those on the panel who argued that Ukraine was an adversary of the United States. This is also false. We have never heard of a narrative from anyone in Congress – much less the House Intelligence Committee – that would substantiate such a wild claim.

In fact, this Congress, together with the Trump administration, has provided substantially more assistance to Ukraine than previous administrations – a fact Hill agreed with.

Those are two pretty large fabrications on the part of Hill. But what makes them particularly troubling is that she admitted that these claims were predicated on hearsay.

The inconsistency of claiming to be a fact witness, then relying on hearsay, shows at least a bias on the part of Hill and potentially undermines her credibility as a witness because her veracity is also called into question. These were material statements that she got wrong.

Further, with a degree of sanctimony, Hill lectured and hectored the committee. All the while basing her critique on false information that for all we know was provided by Intelligence Committee Chairman Adam Schiff, D-Calif., himself.

Adding to the problems in Hill’s testimony was a not-so-thinly-veiled attack on President Trump’s policy. She, like all of the diplomats who testified, agreed that corruption is endemic in Ukraine. Like all of the witnesses, she concurred that Ukrainian President Volodymyr Zelensky was elected to be a change agent to fight and someday end corruption.

On the other hand, President Trump is skeptical of all foreign aid. He was aware of decades of government corruption in Ukraine and believed that certain actors in Ukraine had interfered in the 2016 U.S. presidential election.

President Trump’s caution at disbursing hundreds of millions of American taxpayer dollars to Ukraine seems to have been a policy burr in Hill’s side. The president wisely waited until the Ukrainian Parliament had approved a special Anti-Corruption Court and removed immunity for corrupt lawmakers before approving the disbursement of aid.

The deep state American diplomats in Ukraine were ticked off at the policy dispute, as well as what they perceived as President Trump’s willingness to send different diplomats and representatives onto their turf in Ukraine –  including former Special Envoy Kurt Volker, Ambassador to the European Union Gordon Sondland, and Energy Secretary Rick Perry.

Hill’s cavalier testimony shows she is the type of the dee state diplomat who is incapable of seeing her betrayal of her duty.

And that is what the impeachment is about. The fanatics who hated Donald Trump during the 2016 presidential campaign are continuing to undermine him using those entrenched in government to perpetuate their coup against this president.