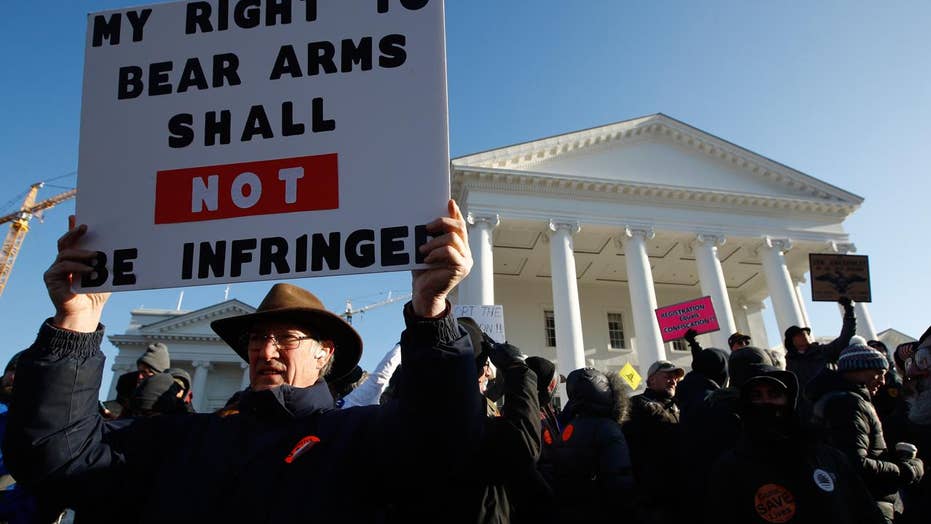 Over the past few months, I’ve watched Virginia, a state that has historically respected and understood the importance of the Second Amendment, move toward a dangerous new approach that would overturn this crucial constitutional safeguard.

Red flag laws with no due process, redundant background checks, so-called “assault weapons” bans, and many other anti-gun policies have been proposed or discussed. But these policies will do little to address the mass violence problem in our society.

What’s happening here is quite simple: liberal politicians in Virginia – from Gov. Ralph Northam on down – are trying to punish responsible, law-abiding gun owners with additional regulatory restrictions instead of focusing their attention on those who commit heinous acts of violence.

In response to the attacks on the Second Amendment by anti-gun politicians, 90 percent of the Virginia’s counties passed measures making themselves gun sanctuaries, ensuring that law-abiding gun owners would not have their rights threatened.

In response to Virginia’s gun control crusade, we’ve seen over 400 municipalities in 20 states, including my home state of North Carolina, pass sanctuary resolutions rejecting the enforcement of certain gun laws that would violate the Second Amendment rights of American citizens. In my district, Davidson and Rowan County leaders have passed sanctuary resolutions to push back against any state-level gun-control measures, and I applaud them for doing so.

After many of the mass shootings, we see days of slanted coverage by liberal media outlets followed by a renewed push for gun control. What’s most surprising and disappointing is the lack of coverage and conversation about the need to address the root problem of mass violence.

Contrary to what you might hear, there are legislative solutions that will help prevent mass shootings that do not include gun control. For example, one bill that I strongly support is the Mass Violence Prevention Act, which would establish a fusion center at the FBI to prevent mass violence and improve law enforcement coordination, information sharing and responsiveness. Unlike many proposals that would violate the Second Amendment, this bill would take concrete steps to prevent and deter the same sort of violence that we see too often in public gathering places.

Contrary to what gun control advocates claim, a background check is required to buy a gun from a store, and it is always unlawful to transfer a firearm to a prohibited person.

Despite the existence of common-sense solutions, too many Americans are fed myths about guns and the process of purchasing them. As a gun store owner who has overseen thousands of purchases and background checks, I know what firearm regulations currently exist and the safeguards that are already in place.

Whenever individuals go to a store to buy a firearm, they can either show their concealed-carry permit, present a handgun purchase permit from their sheriff’s office (both of which require a full criminal and mental background check), or the licensed retailer is required to run a background check through the National Instant Criminal Background Check System (NICS) or a comparable state-level system before the purchase can be completed.

Since 1998, more than 300 million checks have been completed on firearms purchases. So contrary to what gun control advocates claim, a background check is required to buy a gun from a store, and it is always unlawful to transfer a firearm to a prohibited person.

Perhaps the most troubling part of watching these policies unfold in Virginia is the fact that such laws ignore the benefits of having an armed and responsible citizenry. Just last month, a man walked into a Sunday church service in White Settlement, Texas. The assailant intended to murder as many people as he could. The reason that his attack resulted in a limited loss of life was due to the presence of volunteer security members at the church who stepped in. Following the shooting, Britt Farmer, senior minister at the West Freeway Church of Christ, said “It could have been a lot worse. I'm thankful that our government has allowed us the opportunity to protect ourselves."

Nobody can deny the horror of mass shootings. No one should minimize the heartbreak that is felt by the victims. We all want our loved ones to come home safe. But we must remember that the Second Amendment is not the cause of these tragedies. Broken families, substance abuse and mental health disorders are recurring patterns that we see brewing inside the perpetrators of mass violence. For instance, among the 25 most-cited school shooters since Columbine, 75 percent were raised in broken homes.

An armed, law-abiding citizenry has its roots in the founding of our country. It goes to the heart of what makes America strong and free. It was Thomas Jefferson who said that “No free man shall be debarred the use of arms.”

Like Jefferson, I believe the Second Amendment is an indispensable constitutional protection that is a safeguard in defense of every American’s individual liberty. We must not sacrifice it in the heat of our heartbreak. We should develop sensible and practical solutions that deter the mass violence problem plaguing America today.