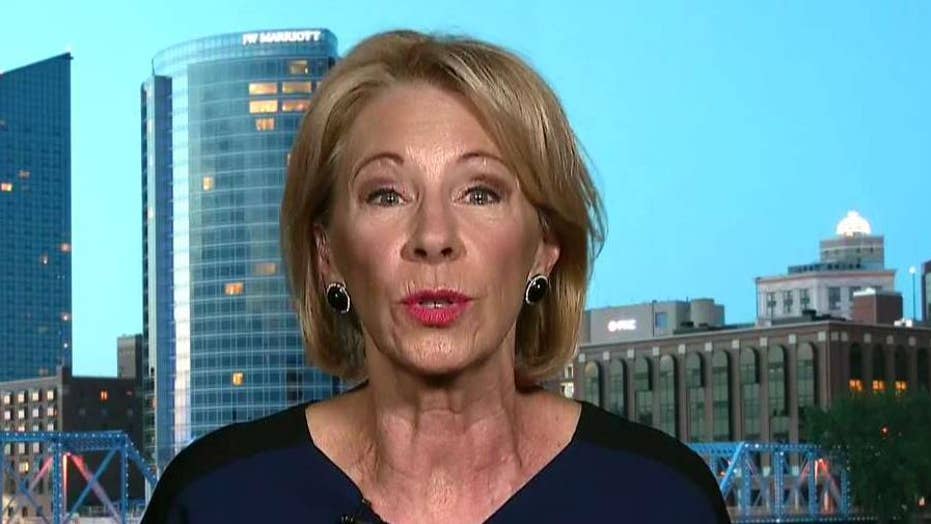 Secretary Betsy DeVos on combating the homeless crisis in schools

Over 114,000 New York City public school students are homeless; Secretary of Education Betsy DeVos explains how she is working to make sure disadvantaged kids have access to top-quality education.

The foundation to achieve the American Dream is anchored in hard work, perseverance and, most importantly, a quality education. Every child in America that has a meaningful chance to learn, can unlock the gateway to success.

America’s antiquated approach to education is failing our country’s youth, and Washington is crippling our ability to provide a world-class education to every American child. When we fail to set America’s children up for success, we fail as a nation.

Many incredible public and private schools are preparing students to succeed. Most kids have the potential to access an education that will allow them to pursue remarkable success. But, far too many kids, especially in our nation’s poorest cities, are not allowed to capitalize on that opportunity. We must remain committed to revitalizing the American dream, and that means revitalizing our broken education system.

Too many of our children are assigned by the government to schools that simply don’t work for them and their parents don’t have the economic means to do anything about it. They’re stuck with no real options and often become just another statistic. Zip codes and invisible lines drawn by government bureaucrats are constraining the success of our children.

Advocates of this failed status quo are quick to highlight good graduation rates, but they ignore the fact that our students still continue to lag behind their peers worldwide. The Program for International Student Assessment (PISA) found that 28 countries outperformed U.S students in math and 17 outperformed U.S. students in reading.

The most recent “Nation’s Report Card” found that two out of three students can’t read as they should. And inner-city, low income, and minority children perform even worse. Nearly half of fourth-graders who qualify for free and reduced lunch are functionally illiterate.

Only about half of America’s high school students took the ACT college entrance exam last year. Just a quarter of them are college-ready in multiple subjects.

The education establishment terrified of losing control to parents and students has ripped the American Dream away from forgotten families across the country, prolonging the cycles of poverty, crime and despair. The Trump administration continues to promote policies that provide low-income students and all students with the tools freedom necessary for long term economic security. Our policies can help end this devastating cycle and empower students to thrive and fulfill their American Dream.

The politically powerful should not deprive children of a great education, and no child in America should be on a waitlist for success.

Forty-three states have public and private school choice programs, which allow parents to decide how and where their children learn, regardless of school zones. Nearly 500,000 students are enrolled in private school choice programs, and more than 2.5 million students enrolled in public charter schools nationwide. Yet, more than one million students are on waitlists to attend public charter schools of their choice. In Pennsylvania, special interest groups motivated Democratic Gov. Tom Wolf to veto a bill that would have helped 50,000 waitlisted kids to pursue the education that was right for them.

The politically powerful should not deprive children of a great education, and no child in America should be on a waitlist for success. That is why President Trump has called on Congress to pass Education Freedom Scholarships. The bill currently before Congress is a federal tax credit that would provide families with more educational opportunities. The proposal will bolster state efforts by providing $5 billion to state-based scholarship programs. The legislation would empower parents to send their kids to the desired public, private, religious, public charter, home, or magnet school that they feel best meets the needs of their children.

Families in states such as Florida, Pennsylvania, Ohio, North Carolina and Wisconsin, which have school choice programs, will greatly benefit. Other states will also be encouraged to step forward and leave the failed status quo behind and put America’s children first!

The truth is that families who can afford private school tuition or who have the means to move out of a bad school zone already have education freedom. All American families need that freedom. States across the country are empowering families to enhance their child’s education. Americans should rally behind President Trump’s plan to ensure that every child has a chance to achieve the American Dream.