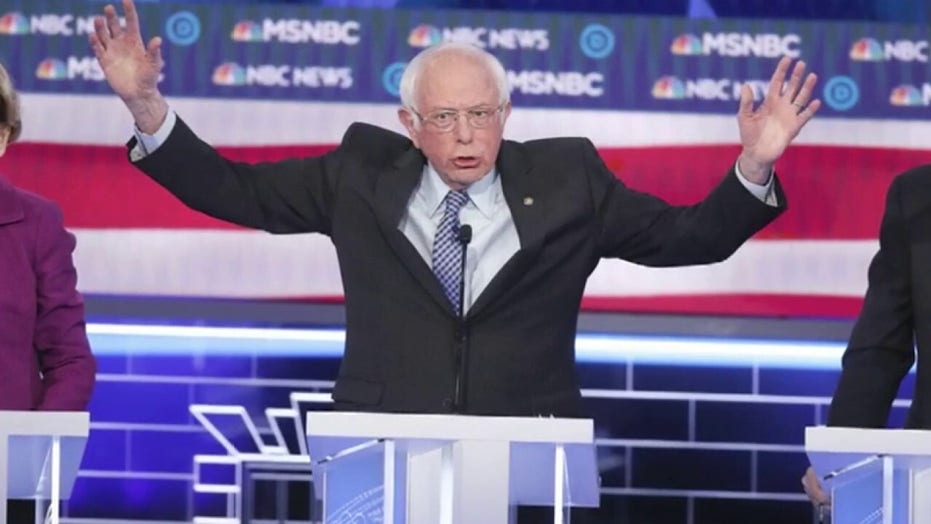 During the Democratic presidential debate Wednesday night in Las Vegas, billionaire and former New York City Mayor Mike Bloomberg looked a little surprised when he was booed for saying: “We’re not going to throw out capitalism. Other countries tried that. It was called communism and it just didn't work.”

Bloomberg’s consultants clearly forgot to tell him that the Democrats are now the party of socialism, impeachment and government control.

The debate was a disaster. American families watching the train wreck heard candidates promising to take away our freedoms and tear down our health care system.

LAURA INGRAHAM: BLOOMBERG 'TRAPPED' IN A DEMOCRATIC PARTY THAT'S TOO FAR LEFT FOR HIM

The contrast between Democrats’ mess on stage and President Trump’s proven track record couldn’t be clearer. Under the president's leadership, hardworking families have experienced the longest period of growth, prosperity and peace in decades.

Democrats continue to fight President Trump simply because they hate him. Their hatred of the president makes them tone-deaf to the pocketbook issues of concern to the millions of Americans who support him and voted him into office.

The Democratic presidential candidates have learned all the wrong lessons on the campaign trail because they’re not listening to voters.

When I was in Iowa and New Hampshire campaigning with the president over the past month, I talked to voters from all backgrounds and walks of life. I spoke to a man who moved to America to escape Canada’s failed health care system after he dealt with impossibly long wait times and low-quality of care.

Yet Democrats want to emulate that very same failed system of Canadian health care with a government takeover of health care in our country.

I also spoke to a Lithuanian immigrant who told me she saw firsthand how socialism destroyed Lithuania and she’s fighting to make sure the same thing never happens here. Yet Democrats running for president have embraced socialist policies with open arms, despite the fact that we have thousands of refugees and immigrants from failed socialist systems in our country right now.

In a diner in New Hampshire, I met a waitress who emigrated from Italy who told me she likes President Trump because he’s a straight-shooter who follows through on his promises.

All we have heard from Democratic presidential candidates is double-speak. They are more concerned about spouting platitudes to win approval from the radical left than advancing individual freedoms for the American people.

These Democratic candidates have radical, dangerous ideas. Fortunately, I saw incredible enthusiasm from the people of Iowa and New Hampshire for President Trump.

As a popular incumbent, the president could have skipped campaigning in Iowa and New Hampshire and still easily won renomination to lead the Republican ticket. But he made a point of hosting two packed-to-the-rafters rallies in Des Moines and Manchester to prove that he’s still fighting for the forgotten men and women of America.

While Democrats took almost a week to figure out who won the Iowa caucuses, Trump set records for the number of voters who showed up to support an incumbent president.

In fact, the week of the Iowa caucuses perfectly encapsulated what is at stake.

In the six days it took Democrats to figure out who won the caucuses, the president swept the Republican nomination in Iowa and delivered a triumphant State of the Union address focusing on record-low unemployment. He was rightfully acquitted in the Senate. And he helped supercharge our economy with a staggering 225,000 new jobs added in January – almost 80,000 more than expected – all thanks to his pro-growth economic policies.

Compared to Democrats’ incompetence and infighting, President Trump is delivering wins for the hardworking families of this great country. With this president, the message is clear: Promises made, promises kept!

After the Democratic debate in Las Vegas, it’s clearer than ever that President Trump is the only candidate we can trust with America’s future.