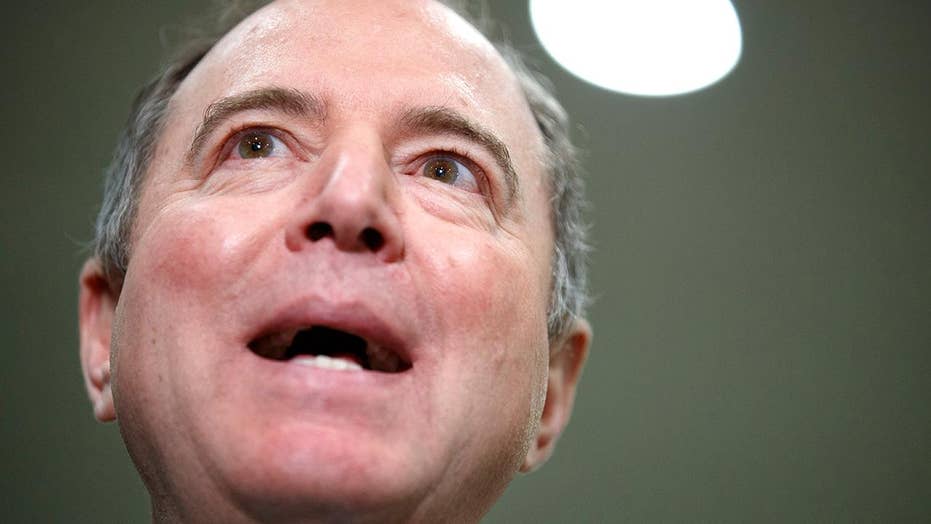 Lead House impeachment manager Adam Schiff says the president's misconduct can't be decided at the ballot box; reaction and analysis on 'The Five.'

House Speaker Nancy Pelosi, D-Calif., rushed impeachment through the House on the thinnest and most nakedly partisan basis in history. Now she’s regretting it.

After Democrats took the supposedly “serious” and “solemn” steps of signing two articles of impeachment against President Trump and slow-walking them to the Senate, they now cry that the Senate must subpoena new documents and witnesses – even ones Democrats didn’t call for in the House.

Democrats don’t seem to realize that they’re complaining that their own articles of impeachment are flimsy, lacking in substance, and failing to sway the American people or any objective senators.

It’s not the Senate’s job to mop up the mess created by Pelosi’s House.

Month after month, Democrats like House Intelligence Committee Chairman Adam Schiff of California assured the American people that they had “overwhelming evidence” that President Trump committed bribery, treason, and an array of other offenses throughout this witch hunt.

But when it came time to vote, Democrats couldn’t identify exactly what crimes they were charging President Trump with committing. They watered down the articles of impeachment to “abuse of power” and “obstruction of Congress,” and then patted each other on the back and handed out pens like they were participation trophies.

Unfortunately for House Democrats, they crippled their case in the Senate in three important ways.

First, Democrats began impeachment proceedings over a phone conversation between President Trump and Ukrainian President Volodymyr Zelensky. The Trump administration was completely transparent about the conversation. The American people could plainly see that no crimes were committed.

Second, Democrats rewrote the rules and denied House Republicans minority rights, for the sole purpose of impeaching a president they hate and overturning the results of the 2016 election. The American people see right through hypocritical Democratic pleas for a “fair” Senate trial.

Democrats’ cynical overreach will backfire when President Trump is acquitted in the Senate, reelected in November and vindicated in the history books.

Third, and most importantly, Democrats failed to convince a single House Republican of the merits of their argument. Every single Republicans voted against the articles of impeachment and even some House Democrats joined us in voting against Pelosi’s sham. Democrats led the first entirely partisan impeachment in modern history – a disgraceful and destructive achievement.

Sometime after their celebrations, Democrats must have realized they had a problem in the Senate. If they couldn’t convince a single House Republican to join their witch hunt, how could they convince Senate Republicans?

Far-left House Democrats like members of “the Squad” may be happy to vote for impeachment, despite the fact that the crimes they accuse President Trump of committing never happened. But selling the rest of the country on this hoax is a much tougher sell.

LICK HERE TO SIGN UP FOR OUR OPINION NEWSLETTER

House Judiciary Committee Chairman Jerrold Nadler of New York – who ran deeply biased impeachment hearings in his committee – addressed the Senate in his role as one of the House impeachment managers and accused Senate Republicans of casting “obviously a treacherous vote” after they voted down partisan rule changes proposed by Democrats.

The outcry was immediate. Even Chief Justice John Roberts admonished Nadler for his inflammatory language. Nadler’s shameful words are an example of the divisiveness Democrats continue to spread throughout our nation.

Democrats’ cynical overreach will backfire when President Trump is acquitted in the Senate, reelected in November and vindicated in the history books.

I was proud to stand with all of my Republican colleagues in the House against an impeachment that is nothing but a shameless Democratic abuse of power.

I have full confidence that Senate Majority Leader Mitch McConnell, R-Ky., will lead a fair trial in the Senate and properly deal with Pelosi’s flimsy articles of impeachment. I sincerely hope Democrats can then abandon their impeachment obsession and start actually working with Republicans in good faith on the real issues affecting the American people like lowering drug costs and securing our border.