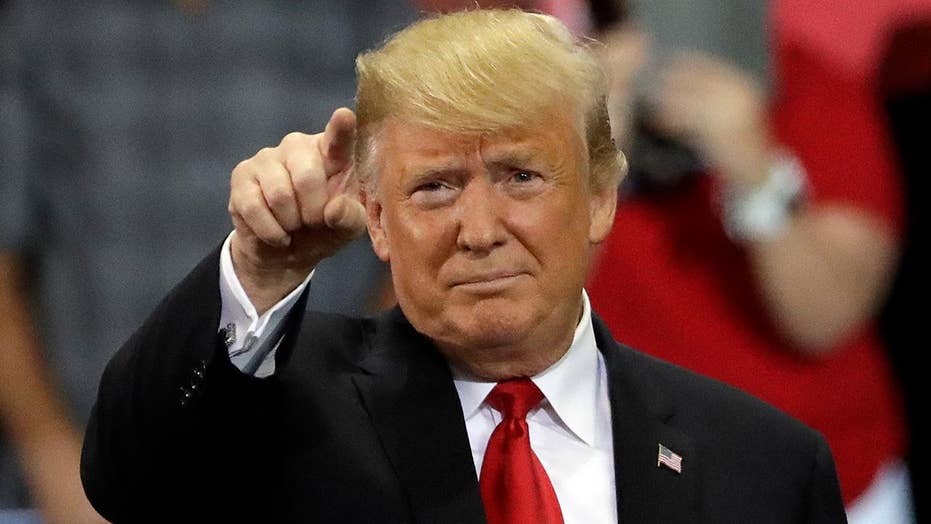 Trump hits the road in bid to defy midterm history

President campaigning for Republicans in key battleground states as the math and historical precedent favors Democrats; Ellison Barber breaks down the numbers.

Thanks to the bold, pro-growth economic policies supported by Republicans in Congress and President Trump that are benefitting hard-working families, America now has the lowest unemployment level since 1969, real wages have gone up and the economy reached a 4.2 percent growth rate this summer.

We have worked together to rebuild our military, secure our border, enforce our laws, and create real opportunity so millions more families can achieve the American Dream. We are ensuring that America is once again strong and secure, so we can continue to defeat terrorism and promote freedom around the world.

Since we passed the Tax Cuts and Jobs Act and began rolling back unnecessary and costly regulations, families are keeping more of their hard-earned dollars and businesses are able to pay higher wages and create more jobs.

In my southeast Louisiana district, local small business owners – like the Caramontas of Gnarly Barley Brewing Co. – have shared with me how tax reform has made it possible for them to finally offer health-care benefits to their employees, create a 401(k) program, and expand production.

By our action to reduce every single tax rate, families now have more money in their pockets. In addition, millions of people who gave up looking for work are now getting back into the workforce and have hope again for the future.

All across this country, industries that we were once told are dying are now seeing a resurgence. This year manufacturers reported the highest level of optimism in 20 years and are experiencing record hiring.

We promised to make our economy competitive again and as a result of our actions good jobs are finally returning to America. Today there are more job openings across our country than there are people looking for work. America is coming back!

Another top priority of this Congress has been to reverse eight years of neglect of our nation’s military. Before we started working with President Trump to rebuild our military, we lost more men and women in uniform to training deaths than we did to combat deaths. By more than a 3-to-1 margin!

This Republican Congress worked with President Trump to finally provide our troops with the tools they need to train safely. We also gave the men and women in our armed forces their largest pay raise in nearly a decade, which they deserved and earned. This was an important first step in rebuilding military readiness so our armed forces can safely and efficiently carry out their mission.

My Republican colleagues and I are committed to building a border wall and we proudly stand in support of the U.S. Immigration and Customs Enforcement (ICE) agents who risk their lives to protect our border and America’s homeland. These agents work each day to prevent violent criminals, human traffickers and deadly drugs from entering our communities.

Yet House Minority Leader Nancy Pelosi’s Democrats have called for abolishing ICE, even as a caravan of several thousand non-citizens is making its way to our southern border, and as our country continues to battle a deadly opioid crisis fueled by illegal drugs smuggled into our country.

Pelosi hasn’t stopped there. She has pledged to take away the tax cuts that are helping hard-working taxpayers control their destiny. She is planning a total government takeover of our health-care system, and favors open borders – all while trying to resist President Trump at every turn.

This is not the direction most Americans want to go. As I’ve traveled the country working to keep our majority, voters have made it clear to me they want to keep building on this success. They want to grow our economy and do more to secure our border – not open it.

While Republicans in Congress are focused on the real issues that affect families and workers, Democrats have pledged to resist at every turn and roll back the progress we’ve made. They want to take us back to the days of high taxes, heavy-handed regulations, open borders and more government control of our lives.

Now is not the time to let Democrats take control and impose their radical, leftist agenda under Pelosi’s rule. Under a Republican House, we will continue to work with President Trump to fulfill our promises and deliver real results for American families to help them build better lives.