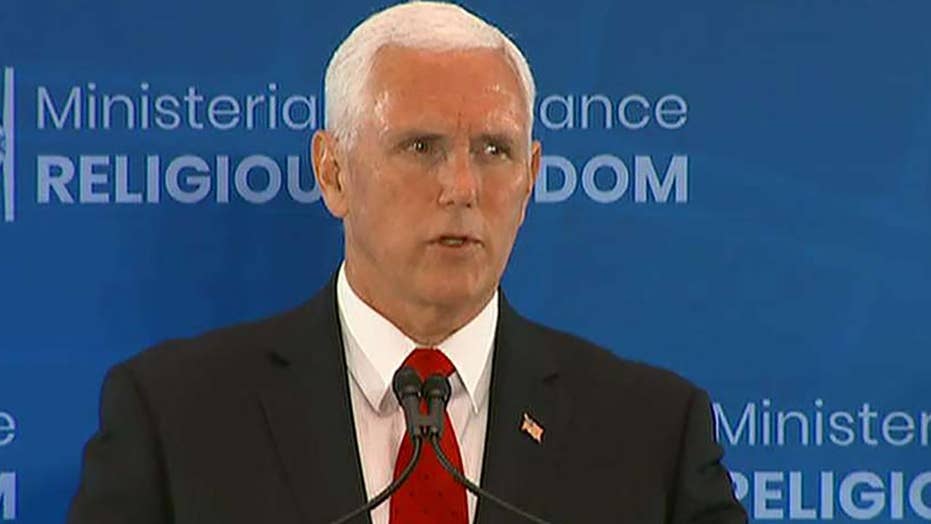 Muslim scholar Dr. Qanta Ahmed says the Trump administration has been 'extremely aggressive' in their commitment to protecting the religious freedom of Christians around the world.

Esther was an innocent 17-year-old girl living in a small, impoverished Nigerian village, taking care of her sick father after her mother's passing years earlier. On an otherwise quiet Nigerian morning in October 2015, as Esther was tending to her father and preparing to attend school, heavily armed Boko Haram fighters opened fire on the village, killing dozens of innocent people, including Ether's father.

The horror of that day is an all too familiar story to anyone who has paid attention to the atrocities committed by Boko Haram in West Africa.

For Esther, the hours of that day were not another story on the evening news or an HBO documentary, but a real-life nightmare. As she watched her lifeless father lie on the ground, Esther and other young women from her village were taken against their will into the Sambisa Forest. For over one year, Esther and the other young women were brutally raped and beaten over and over again and forced at gunpoint to renounce their Christian faith.

TONY PERKINS: POMPEO'S FAITH IS NOT A LIABILITY — IT'S AN ASSET

After her release, Esther discovered she was pregnant and found that her own family and villagers had disowned her and the other young women who had been held captive. Esther's own grandparents refused to call her by her name, instead referring to her as "Boko," like a scarlet letter for having been kidnapped, raped and tortured.

Esther is now traveling the world with her young child, drawing attention to the atrocities committed by Boko Haram in the name of Islam. The brutality directed toward Christians and other non-Muslims in Africa continues, with thousands of stories like Esther's waiting to be told.

These three serve as beacons of hope for millions across the globe who are experiencing persecution for their faith. They came to the U.S. as part of the second annual Ministerial to Advance Religious Freedom; Pompeo and Brownback gathered nearly 1,000 leaders of diverse faiths from 106 counties to discuss America's role in protecting religious freedom around the world. And, as Pompeo stated, "to turn our convictions into action."

Pompeo also announced the creation of the International Religious Freedom Alliance to continue the work started by the ministerial. The alliance is an international effort to defend the rights of people of all religious faiths. The ministerial event and newly formed alliance have galvanized a new level of interest within the American foreign policy community, long overdue, by drawing attention to the intrinsic connections between religious freedom and other critical U.S. national interests like political stability, economic development, humanitarian assistance, and combating terrorism.

The Trump administration has also put hundreds of foreign governments on notice that the United States will no longer turn a blind eye to the atrocities of religious repression and violence around the world. This increased attention is improving the likelihood that more governments will agree to take individual and collective action against persecution, and seriously consider the real advantages of religious freedom — defined as full equality under the law for all religious individuals and communities.

The administration put words into action when Pence announced a new round of U.S. sanctions in response to Iran-backed militias terrorizing religious minorities. He announced similar sanctions against the Burmese government for its brutal persecution of the Rohingya.

Trump and Pompeo have unleashed Brownback to travel the globe and lead the charge on behalf of the United States to advance our foreign policy in a way that makes a difference in the lives of people around the world being persecuted for their faith, while simultaneously advancing other American interests such as governmental stability, economic development, and counterterrorism.

Brownback, whose nomination was hotly contested and required a tie-breaking vote from Pence, has drawn praise from all corners of the U.S. government. House Speaker Nancy Pelosi praised Brownback's work at the ministerial conference. Rep. Ilhan Omar, D-Minn., stated during a hearing that she admired his efforts and looked forward to working with him.

Trump, Pence, Pompeo and Brownback deserve great credit for their steadfast defense of religious freedom in America and around the world.

The die is cast, and religious freedom is now a foreign policy priority of the United States. It is imperative that the U.S. continue to speak to the entire world with one voice, with resolute moral clarity, that we stand ready to export one of our most central and sacred rights, the right of humans to worship as they please and to live out their faith as they see fit.

Timothy Head is the executive director for the Faith & Freedom Coalition.