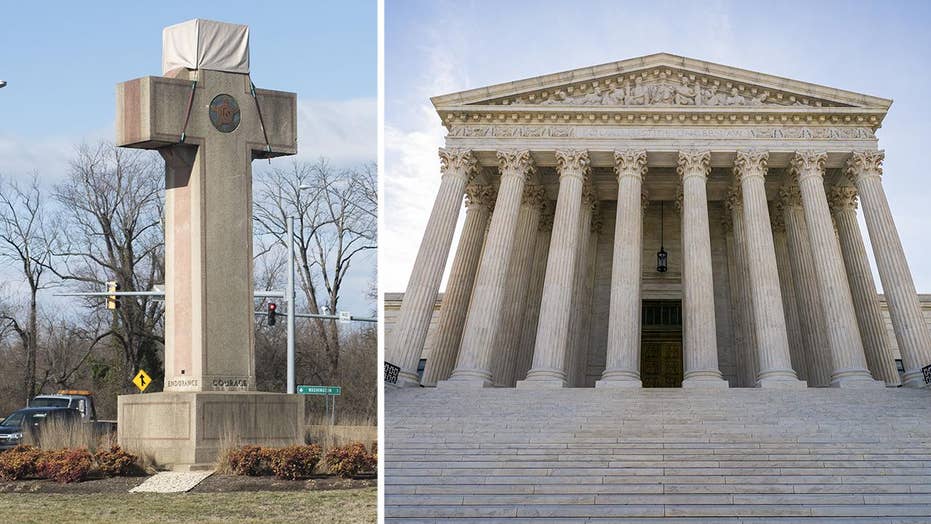 The Supreme Court has ruled that a Peace Cross war memorial on public land outside Washington, D.C., can stand; Shannon Bream reports on the 7-2 decision.

Thursday’s 7-2 Supreme Court decision allowing a Peace Cross war memorial to remain on public land in Bladensburg, Md., near the nation’s capital is a landmark victory for religious freedom. This is good news for America.

Thankfully, the days of activist courts illegitimately weaponizing the First Amendment’s Establishment Clause to attack religious symbols on public land are over.

At last, the Bladensburg World War I Veterans Memorial – what everyone can now safely call the Peace Cross – is safe from the wrecking crew. Importantly, so are other memorials honoring veterans and public displays of religion across our country.

“For nearly a century, the Bladensburg Cross has expressed the community’s grief at the loss of the young men who perished, its thanks for their sacrifice, and its dedication to the ideals for which they fought,” Justice Samuel Alito wrote for the Supreme Court majority.

The memorial honors 49 local soldiers who died defending our nation in World War I.

The high court’s decision should come as no surprise, because America’s founders were not hostile to religious symbols or expression.

Those who have for decades tried to purge the landscape of any religious symbols can now park their bulldozers and sandblasters. Our founders would have been appalled at their attempts to make the government hostile to our religious heritage, history and symbols.

As John Adams once said: “Our Constitution was made for a moral and religious people. It is wholly inadequate to the government of any other.”

In other words, Americans have always been a religious people. With such a religious heritage, no one should be surprised to see religious symbols, mixed with secular, throughout the public square.

Those who have for decades tried to purge the landscape of any religious symbols can now park their bulldozers and sandblasters. Our founders would have been appalled at their attempts to make the government hostile to our religious heritage, history and symbols.

All Americans now have more freedom than we have had in decades. Government officials will now no longer be able to employ the First Amendment as a hostile cudgel against people of faith and their public expressions of faith.

Instead, the justices of the Supreme Court have restored a commonsense understanding to the Establishment Clause of the First Amendment. In so doing, the Supreme Court has put an end to the mounting attacks on crosses, Stars of David, Nativity scenes and other displays of faith in public.

The Supreme Court decision sends a clear message that the presence of religious symbols and religious activity in public contribute to the diversity of America and can only be purged by twisting the Constitution.

Memorials like the Peace Cross, Justice Alito wrote, now receive a presumption of constitutionality for longstanding monuments, symbols and practices.

Americans need no longer fear reprisals against the display of the Ten Commandments, a Nativity scene or the national motto on government property.

Indeed, this high court’s decision sets students and teachers free to pray on public school grounds during their free time. It will allow speeches mentioning religious themes at a public school graduation ceremony to continue without hecklers trying to shut them down with the threat of a lawsuit.

Even elected officials – so fearful of an attack that they have been threatening students and valedictorians if they mentioned God in their commencement speeches – can now stop their censorship and rest at ease.

That is a hostility toward religion that the Supreme Court will not abide. As Alito wrote in the court’s majority decision: “A government that roams the land, tearing down monuments with religious symbolism and scrubbing away any reference to the divine will strike many as aggressively hostile to religion.”

Above all, the memory of those who served and sacrificed themselves on the altar of freedom cannot now be questioned because someone is merely “offended” by the shape of their memorial.

The Peace Cross is a legitimate symbol of America’s history. The mothers who designed the memorial after the gravestones that marked the graves of their sons in Europe understood that. So did The American Legion, which defended the Peace Cross against a lawsuit by the American Humanist Association seeking to take the cross down.

And now, the U.S. Supreme Court has declared that – far from establishing a church or mandating any religious belief or behavior – the Peace Cross honors the sons and brothers in arms who made the ultimate sacrifice for our country.

It is fitting that a memorial to the men who died in the “war to end all wars,” now ends the war to end all memorials with religious shapes or symbols.

The 49 men from Prince George’s County, Md., honored by the memorial appreciated the great freedom of religion that is a hallmark of our country’s brand of freedom. They exercised their faith and heroically gave their lives defending that freedom from enemies, both foreign and domestic.