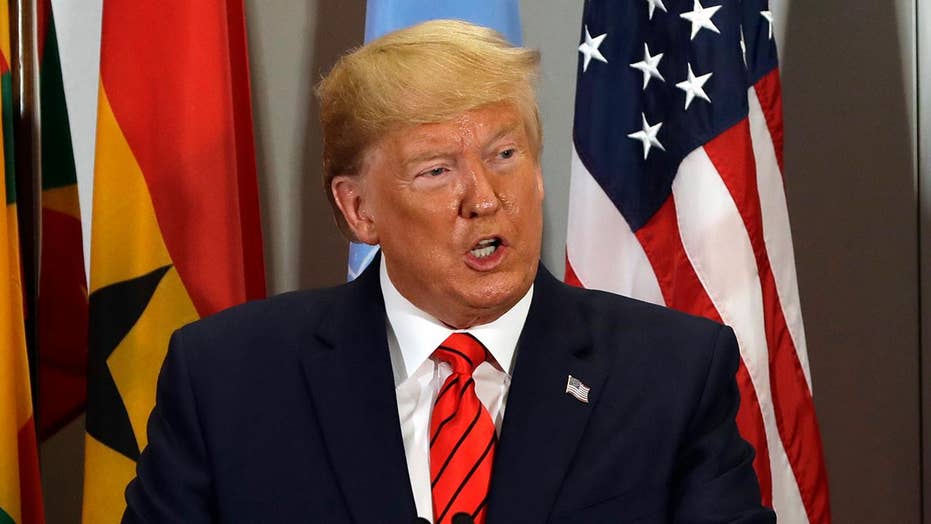 Impeachment fever broke out on Capitol Hill – and that’s meant virtually no coverage of a week of solid wins for Trump’s foreign policy team on Iran, immigration and religious freedoms.

Here are the headlines you should have seen.

Top European Allies Join Trump on Iran. On Monday in New York, Britain, France and Germany sided with the U.S. and named Iran as perpetrators of the attack on Saudi Arabia’s Aramco oil facility.  “It is clear for us that Iran bears responsibility for this attack. There is no other explanation,” said the official statement from French President Emmanuel Macron, German Chancellor Angela Merkel and British Prime Minister Boris Johnson.

That’s huge, and Merkel also told Iran’s President Rouhani flat out that sanctions would not be lifted.

Remember, the Iran deal was very much a UN creature: it’s the other UN Security Council Permanent members (Britain, France, China, Russia) plus Germany, and the EU, in the JCPOA.

Even more significant, Britain, France and Germany (the E3) now demand strict new terms, quite similar to Trump’s.  “The time has come for Iran to accept a long-term negotiation framework for its nuclear program, as well as regional security issues, which include its missile programs," their statement declared.

“E3 paralysis,” ranted sanctioned Iranian foreign minister and Twitter fan Javid Zarif.  Nope.  It’s a clear win for Trump as Iran failed to split the US and its allies despite the nuclear blackmail and military provocations this summer.

Four Nations Ink Deals to Cut Down the Migrant Caravans.  Back in the Western Hemisphere, the White House sewed up a big win on immigration policy on Thursday when Honduras became the third and final “Northern Triangle” nation to sign a bilateral “safe country” agreement.  It’s bigger, in fact, than anything President George W. Bush or Obama accomplished.  Trump now has agreements with Guatemala, El Salvador and Honduras.  Talks with Mexico and Panama are underway.  Bush 43 signed just one such agreement, with Canada, while the Obama administration signed none.

The bilateral agreements follow Geneva protocols on refugees.  The procedure channels asylum seekers to apply for asylum in the first safe country they reach, not just breeze through and head for the US.  The European Union inked a similar agreement with Turkey in 2016 on account of the Syria crisis.

For Americans, the three agreements complete a crucial triangle covering sites where migrant caravans formed.  Acting Homeland Security Secretary Kevin McAleenan said he hopes the policy will discourage people from attempting a “dangerous and often futile journey” to the US border.

The new policies should also help put coyotes and smugglers out of business and curtail asylum fraud, while streamlining the visa process for agricultural workers, Trump said at the Guatemala signing in July.

Channeling Eleanor Roosevelt, Trump Upholds Global Religious Freedom in UN Session. Ironically, this one got some coverage, much of it condescending.

Here’s the story.  At the U.N. General Assembly, President Trump attended a meeting on protecting religious freedom.  “We ask the governments of the world to honor the eternal right of every person to follow their conscience, live by their faith and give glory to God,” Trump said in his remarks.

Sad, because the fundamental freedom of religion is enshrined in the UN Charter.   The “freedom of every person to worship God in his own way, everywhere in the world” was how President Franklin Delano Roosevelt phrased it in his 1941 message to Congress.  After Roosevelt’s death in 1945, his wife Eleanor Roosevelt carried the freedom of religion theme through her work during the formation of the UN despite massive resistance from the atheist Soviet Union.

Yet when Trump talks about religion at the UN, its viewed cynically.  And Trump has backed up his UN speech with 5,000 refugee slots specifically for people fleeing religious persecution.

Separately, Secretary Pompeo picked up the theme, addressing the UN’s concern about China’s internment of 1 million Uighurs and “China’s attempt to erase its own citizens’ Muslim faith and culture,” in Pompeo’s words.

Unity on Iran, new agreements on immigration, and championing religious freedom are all products of patient, painstaking work.  Beyond those issues, Trump also met with leaders from New Zealand, Australia, Poland, and Pakistan, to name a few.  The US has urgent military and security cooperation issues ongoing with all four.

And finally, Icy Stares Chill Working Lunch by World’s Top Security Leaders.  Not to say it’s all been easy.  Far from it. The group photo of the UN Security Council Permanent Members meeting attended by Pompeo and new UN Ambassador Kelly Craft on Thursday looked chilly indeed.  No wonder, as Russia and China are working hard to set up an alternative global order, the kind that could make a mockery of the UN.

For this week at least, Team Trump should get more credit – or at least more coverage – when their foreign policy work delivers results.