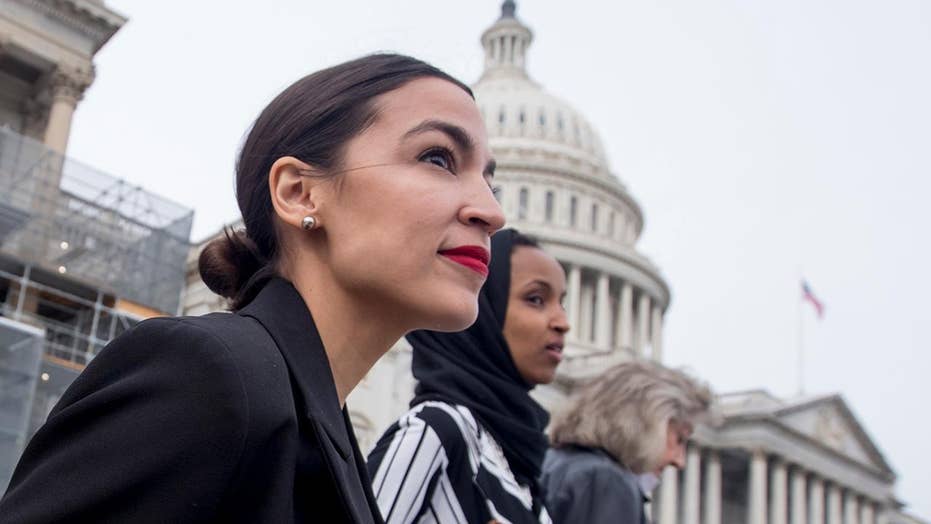 New Democratic members of Congress are making waves during their first days in office: Will they shake up the messaging?

It’s been less than a week since radical Democrats took control of the House of Representatives. They’ve given us a sneak peek into what the next two years will be like under their control.

Buckle up, it’s going to be a bumpy – and entertaining at times – ride for sure. But in the end, the Democrats just may hand us another four years of President Trump. The GOP campaign ads practically write themselves.

In just a few short days after taking back control of the House, some Democrats have already called for the impeachment of President Trump, the abolition of the Electoral College, restraints on presidential pardon power, and proposed a tax rate as high as 70 percent for the wealthiest taxpayers.

This is in addition to them doubling down on their support for open borders amidst a government shutdown to secure our borders and having one of their newest members – Rep. Rashida Tlaib, D-Mich., relay to a room full of supporters a conversation about President Trump she had with her son in which she said “we’re gonna impeach the motherf-----.”

Know your audience. To say all of this is outside of the mainstream of America is an understatement.

According to a Harvard-Harris poll in December, 74 percent of registered voters identified themselves as either moderate or conservative.

The Democrats have quickly shown us that in the next two years they won’t be interested in getting a thing done for the country or the people who elected them. They hate President Trump, and they’re going to spend their time in office showing us just how much they hate him.

Did someone forget to mention at freshman orientation that Congress is also home to a legislative body called the Senate? In order to be effective and actually send legislation to the president, the House must work with the Senate. Otherwise, members are just breathing each other’s hot air.

The Democrats don’t care. They’re not in Washington to work together or be effective. They’re in our nation’s capital to make a point. And a scene, apparently.

The Democratic House is proposing things so far left that there is no way the Republican- controlled Senate will ever pass them. Have these people ever seen a copy of the Constitution?

The Democrats have quickly shown us that in the next two years they won’t be interested in getting a thing done for the country or the people who elected them. They hate President Trump, and they’re going to spend their time in office showing us just how much they hate him.

Rep. Tlaib bragged on social media that she was “#unapologeticallyMe” when she used an obscenity to describe the president. But when confronted face to face by reporters about her very public statement, she couldn’t run away from the journalists fast enough.

Tlaib should be who she is, and this time she should do it for a national audience in front of her 434 colleagues by repeating her speech in the U.S. Capitol and making it part of the official Congressional Record.

Go ahead congresswoman, be #unapologeticallyYou – but this time do it on the House floor.

Virginia Democratic freshman Jennifer Wexton removed the POW/MIA flag in front of her office, even though almost 60,000 civilian veterans – not counting members of the military on active duty live in her district.

The ridiculousness of these actions is only matched by the extreme policies the out-of-touch House Democrats are trying to sell us.

President Trump has already noticed this as he continues to tout the many achievements of his administration. The blowout jobs report number from last week contrasts rather starkly with the kookiness we’ve already seen from House Democrats.

If their first few days in the majority is any indication, we can look forward to two years of Democratic overreach and radical policy proposals driven exclusively by their animosity toward the president, rather than the will of the people or the good of the country.

The House Democrats have made it clear they have no interest in playing well with others. They’re headed down a one-way street with their open hostility and their ultra-left agenda.

In a surprising twist of irony, their strategy could prove to be most effective, but just not in the way they hope. House Democrats could end up being one of the biggest assets to President Trump’s reelection.