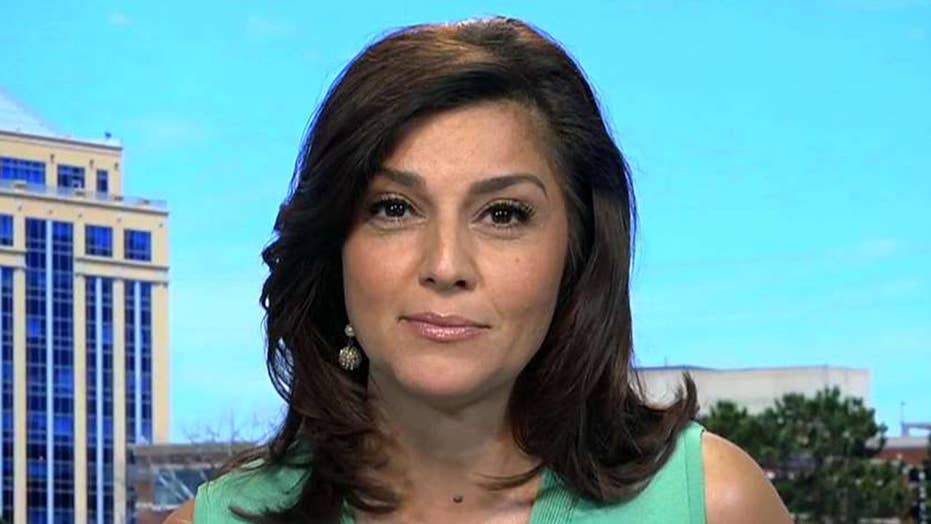 Fox News contributor Rachel Campos-Duffy details her new op-ed on talking to your kids about socialism and shares she is expecting baby number nine with husband Rep. Sean Duffy.

Parents and grandparents are rightfully troubled by the normalization of socialism in today’s youth culture. In 2016, self-avowed socialist Sen. Bernie Sanders, I-Vt., who honeymooned in the former Soviet Union and cheered Fidel Castro’s communist revolution, won more primary voters under the age of thirty than Hillary Clinton and Donald Trump.

Paid membership dues to the Democratic Socialist Party of America also increased by over 600 percent last year. When asked what system of government they prefer to live under, a majority of millenials chose socialism and communism over capitalism. So what’s a parent to do?

The first thing is to recognize that a lot of young people don’t really know what socialism is. They just associate it with positive words like “fairness,” “equality” and the always seductive, "free." When told the actual definition or the historically accurate results of its implementation, they don’t much like it.

It’s the reason why when polled, Donald Trump’s favorablity among millenials is tied at 19 percent with Mao Zedong who killed somewhere between 48-87 million people. Young people simply don’t know that Mao, Lenin, Stalin, and Castro were brutal, murderous dictators. Progressives control America’s schools and text book industry and they dishonestly leave the ugliest parts of the collectivist story out.

Ocasio-Cortez's tweets and Bernie’s rallies will never have the lasting impact and influence that we as parents and grandparents have with our own children.

If you aren’t talking to your kids about socialism, someone else is. So use car time, dinner time, tax preparation time, and time spent together at your work or small business to teach your child about the virtues of capitalism, the system of government that has lifted more people out of poverty. Tell them the facts about communism and socialism’s bloody history of repression and also about the real-time, tragic events unfolding in Venezuela, which is a cautionary tale for America.

Before socialism, Venezuela was the richest country in Latin America. Today it is the poorest. The same arguments used to sell Venezuelans on socialism twenty years ago are being used by Sanders and Rep Alexandria Ocasio-Cortez, D-N.Y., today.

When it comes to talking to your kids about economics, start early beause the progressive culture-makers are starting earlier than you think! Cartoon storylines regularly denegrate competition and other foundational principles of capitalism. Movies depict successful entreprenuers as villians. Even children’s books are replete with messages priming our kids for the lies of socialism. And like the cartoons and movies, they wrap their failed ideas in mantels of compassion, kindness, and moral (social) justice, making it easy to dupe an unsuspecting parent. After all, who doesn’t want to raise kind kids?

One of the most popular and subversive of these children’s books is, "The Rainbow Fish." Published back in 1992, it remains a perennial favorite of schools and librarians across America. If you haven’t heard of it, chances are your child has. Written by Swiss author, Marcus Phister, this widely acclaimed, award-winning book is the story of a fish with beautiful, shiny scales.

This rainbow fish, the most beautiful fish in the ocean, is asked by a plain-looking fish without shiny scales to share some of his scales. When the rainbow fish refuses, he is shamed and socially ostracized. Feeling sad and lonely, he consults a wise octupus who advises him to reconsider giving away his scales, “You will no longer be the most beautiful fish in the sea, but you will discover how to be happy.” The rainbow fish proceeds to give away all his scales to scaleless fish until he is left with only one scale and looking exactly like all the other fish. Only then do the other fish finally accept him.

Sharing our blessings can certainly bring happiness, but I’m troubled by the message this book sends to children about envy, entitlement, uniformity and mediocrity. Not to mention the bullying and shaming used by the scaleless fish to get what he wants.

The ancedote to Rainbow Fish and so many other collectivist messages being fed to our children is the American classic, “The Little Red Hen.” Not many children today have read this story extolling the virtues of hard work, perseverance and personal responsibility.

The industrious hen is a wonderful rold model who gently and continuously invites her lazy housemates to join her in the work process. When she finally takes the hot, delicious-smelling bread out of the oven, the product of a long summer of planting and harvesting the blessings of a few found grains of wheat, she has a choice to make when her slothful housemates crowd into the kitchen to partake in the fruits of her labor.

Today’s progressive children’s authors would have the little red hen share with her hungry roommates. But back in the politically incorrect world when "The Little Red Hen" was written, authors, teachers and parents weren’t afraid of a little tough love. By witholding the delicious bread from her irresponsible friends, the little red hen is teaching them (and young readers) a valuable lesson about the dignity and benefits of hard work and the consequences of indolence. And if you ask me, there’s a lot of compassion in that!

So don’t lose hope for the future of America’s free-enterprise system. Just recognize that you play a critical role in explaining and defending its virtues. Ocasio-Cortez's tweets and Bernie’s rallies will never have the lasting impact and influence that we as parents and grandparents have with our own children. Just start early. It’s as simple and beautiful as cuddling up to a bedtime story called, "The Little Red Hen."

Rachel Campos-Duffy serves as a co-host of FOX & Friends Weekend and co-host of From the Kitchen Table podcast with her husband Sean Duffy.