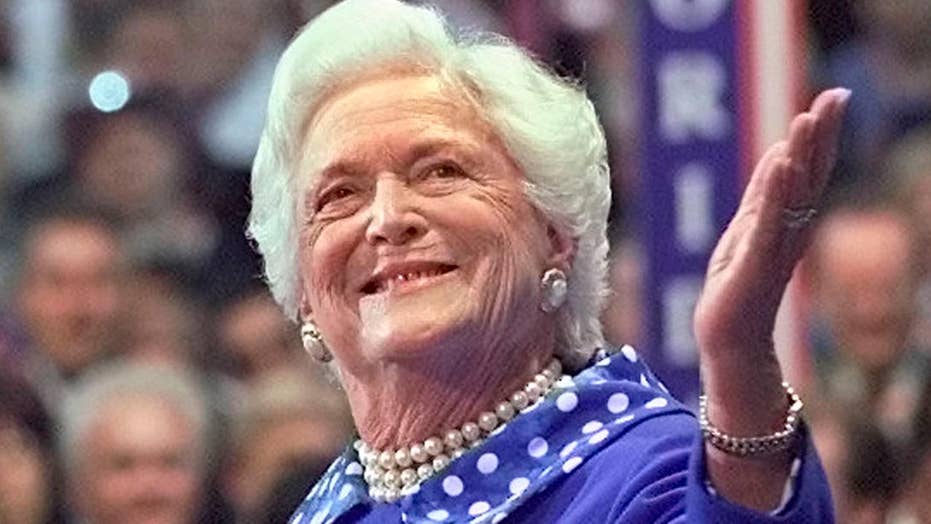 Randa Jarrar, an English professor at California State University’s Fresno campus, launched into an obscenity-filled Twitter tirade that began: "Barbara Bush was a generous and smart and amazing racist who, along with her husband, raised a war criminal. F--- outta here with your nice words.”

Here is more of Jarrar’s euphoric excitement and nasty name-calling that she splashed across Twitter like a garbage truck spilling it contents: "PSA: either you are against these pieces of s--- and their genocidal ways or you're part of the problem. That's actually how simple this is. I'm happy the witch is dead. Can't wait for the rest of her family to fall to their demise the way 1.5 million Iraqis have. byyyeeeeeeee.”

Classy – and such a talented writer! Does this English professor assign her students to write filth like this this, and give them bonus points for swearing? How on Earth did she get to be an English professor, anyway?

Fresno State is investigating comments made by professor Randa Jarrar, who said former first lady Barbara Bush was an "amazing racist," among other things, just an hour after her death was announced. (California State University, Fresno)

And what kind of sick, twisted individual gleefully celebrates the death of a human being? Unless the death you’re celebrating is that of someone like Adolf Hitler or Usama Bin Laden.

She became even more brazen and full of herself in her tweets, flaunting her salary and saying there was no way she could ever be fired because she has tenure. She even tagged the university’s president, and practically dared her critics to do the same if they didn’t like what she was saying.

The Fresno Bee reported: “The backlash on Twitter was immense on Tuesday night, with thousands of comments pouring in to condemn Jarrar for what she had said. Jarrar eventually made her social media accounts private.”

It initially looked as though the university was going to stand behind Jarrar and her hate speech. Fresno State President Joseph Castro released a statement Tuesday saying that while the school didn’t condone her comments, her views weren’t made as a representative of the university, but rather as a private citizen.

At first the university was trying to have it both ways, distancing itself from Jarrar’s comments, while attempting to avoid holding her accountable for her speech.

However, amid a growing backlash, Lynnette Zelezny, the university’s provost, said Wednesday that tenure does not in fact protect Jarrar from being fired.

And after his initial comments, Castro said: “A professor with tenure does not have blanket protection to say and do what they wish. We are all held accountable for our actions.”

Far too often lately we’ve watched as conservatives have been invited to speak at universities by legitimate campus organizations only to be subjected to protests, heckling and even violence More often than not, the school administration appears to turn a blind eye to it all.

Is rejoicing at the death of Mrs. Bush the step too far? Have we finally seen a far-left extremist, who’s come completely unhinged, cross a line in the sand – or is this just wishful thinking?

The university provost said Jarrar can be fired. So why not fire her and make her the example all academia so desperately needs?

Jarrar talks about having the right to free speech in one of her tweets. This is the glaring ignorance we often hear from supposedly intelligent people who throw around the First Amendment to justify their hateful rants.

What they don’t seem to get is that the First Amendment protects them from the government suppressing their speech.  What it does not protect them from is an employer’s freedom to decide they are bad for their brand.

If an employee chooses to publicly use vulgar, hateful language, or wish someone dead, an employer can decide that’s not somebody they want associated with their institution, organization or company.

Individuals still have the freedom to say all of those abhorrent things, but their speech has consequences.

In addition to being a professor, Jarrar is, according to her bio, is an “award-winning novelist, short story writer, essayist, and translator.” By society’s measuring stick, she’s successful.

Ironically, however, it was Mrs. Bush herself who said: "Never lose sight of the fact that the most important yardstick of your success will be how you treat other people – your family, friends, and co-workers, and even strangers you meet along the way."

By that account, Jarrar still has a long way to go to succeed. Mrs. Bush was the picture of class and dignity, and a glowing example of how to treat other people. She was admired and respected across the political spectrum – as the flood of tributes since her death has shown.

Jarrar is the polar opposite. She may be educated in the classroom, but in life the professor has lot to learn, and who better for her to learn it from than the late first lady?