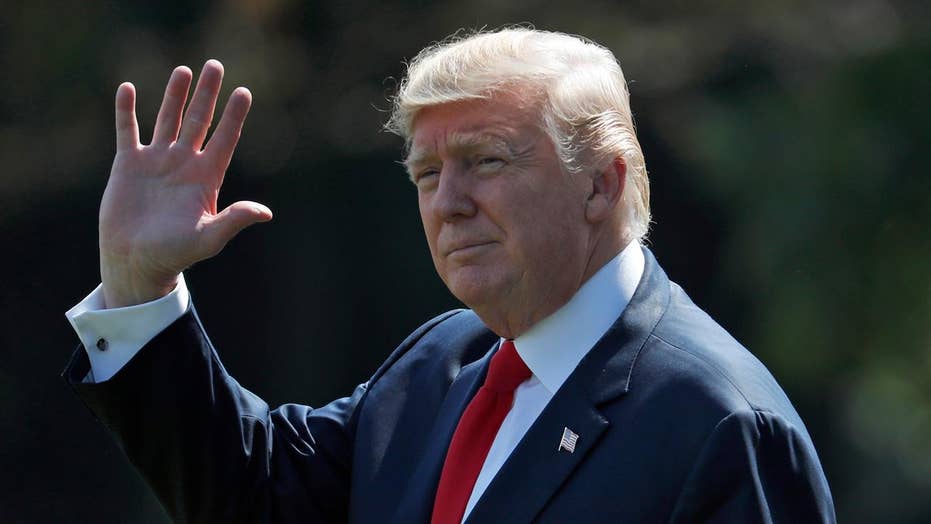 Trump tweets base is stronger than ever despite 'fake news'

Donald Trump is now officially on a working vacation, and not a minute too soon. Above all, he should give his Twitter thumbs a rest.

Although his administration had a significant foreign policy accomplishment this weekend – the United Nations’ Security Council’s unanimous approval of the toughest-ever economic sanctions against North Korea to punish Pyongyang for its ongoing nuclear weapons program - President Trump distracted press attention from that achievement with a Twitter storm on Monday morning of no less than seven early bird attacks on the press.

Yes, the MainStreamMedia’s coverage of the first six months of his presidency has been unusually, almost unrelentingly, negative in substance and tone. As a report on Mr. Trump’s first 100 days in office by the Harvard Kennedy School’s Shorenstein Center argues, no president has had as much or as negative press coverage in modern history.

Mr. Trump was the topic of over 40 percent of all news stories in major publications and television – three times the amount afforded previous presidents. But the Trump presidency's astoundingly inaccurate claims and vulgar assertions, plus attacks on fellow Republicans - in most part thanks to Mr. Trump’s own tweets - have also set new standards for negativity.

Negative reports in mainstream publications and TV outstripped positive ones on average by 80 percent to 20 percent. Even during his best week of coverage – his missile strike on Syria in April to punish President Bashar Assad for having used nerve gas on civilians – news reports about him were still 70 percent negative to 30 percent positive.

The president will hardly find the latest news stories more edifying. A case in point is Newsweek’s new issue featuring a particularly savage article which reports that although candidate Trump lambasted his predecessor for playing golf and vowed not to follow suit, President Trump has so far spent 40 days at golf clubs at a cost of $55 million to taxpayers while passing zero pieces of major legislation. The magazine’s cover feature - “Trump, America’s Boy King: Golf and TV Won’t Make America Great Again“ - features an illustration of him in a recliner surrounded by junk food, his cell phone and a TV remote. The illustration’s title is “Lazy Boy.”

Despite his constant need to be at the center of the media’s and the nation’s attention, President Trump has had only one solo press conference, fewer than any other president in the age of television. (George W. Bush held five his first year; Bill Clinton had only two in 1998, the single-most low-rated point in his presidency; Ronald Reagan had 31.) Fielding questions about wide-ranging, complex subjects might prove embarrassing, his aides may fear.

But the president has found ample time to tweet. In the first six months of his presidency, Newsweek reports, Trump sent 1,029 tweets, many of which contained inaccuracies. It is hard to forget Mr. Trump’s dubious claim that President Obama wiretapped Trump Tower during the campaign, or his succession of smears of critics and even his own Cabinet members, including his infamous attack on Attorney General Jeff Sessions for having recused himself, as legally required, from the inquiry into alleged Russian meddling in the 2016 presidential campaign.

His perennial favorite target, however, has been the media for reporting facts that displease him. The Newsweek article, for instance, notes that rather than implanting his own vision of how to “Make America Great Again” by enacting his own sweeping reforms and new iniatives, "15 of the 42 bills he has signed have rolled back rules and regulations issued under Obama's administration.”

The Washington Post recently reported that only 50 of some 400 key posts in his administration have been filled, and only another 165 people nominated for them. The State Department is a particular embarrassment: almost none of the undersecretary posts is occupied by his nominees; 20 of some 26 assistant-secretary of state slots remain empty or filled by Obama holdovers.

Trump supporters hope that recently designated White House chief of staff Gen. John Kelly will bring some structure and discipline to the notoriously chaotic White House. Some analysts already see progress. All White House aides and advisers must now report through Kelly’s office, as must all seeking meetings with Mr. Trump, including apparently daughter Ivanka and son-in-law and envoy to everything Jared Kushner. Gen. Kelly has also taken steps to ensure that the information Mr. Trump receives is accurate, partly to prevent him from re-tweeting obvious misinformation.

Monday morning’s Twitter tornado was a clear departure from the discipline Gen. Kelly is struggling so mightily to impose. It seems to have been sparked by a weekend report in The New York Times that several Republicans, including his own vice president, are preparing to succeed Mr. Trump in 2020 if he chooses not to or cannot serve a second term. Though Mike Pence was quick to denounce the report as more fake news, the morning Tweet storm suggests that President Trump was not assuaged. Nor was John Kelly around to carry his golf bag or deny him cell phone and TV privileges.

Mr. Trump’s itchy Twitter finger, however, is more than a political challenge for Gen. Kelly. On Tuesday morning, President Trump retweeted a Fox News story that U.S. Amb. Nikki Haley said contained classified information.  In a Tuesday morning interview with the network's "Fox & Friends," Ms. Haley, apparently unaware that her boss had just retweeted the story, declined to comment on the Fox News account because it contained “classified information.”  It was “incredibly dangerous” to disseminate such information, she said, seemingly unaware that Mr. Trump had just done so.

On Monday, Fox News, citing anonymous intelligence sources, reported that U.S. intelligence agencies had detected North Korea loading two Stormpetrel anti-ship cruise missiles on a Wonsan guided-missile patrol boat at Toejo Dong on North Korea’s east coast. This was the first time that such missiles had been deployed on such a platform since 2014, which the story called “more evidence that North Korea isn't listening to the diplomatic threats from the West.”

President Trump has repeatedly condemned leaks to the media and called for leakers to be punished, which Attorney General Jeff Sessions announced new measures to do last week. Will General Kelly soon have a vacation pow wow with Ambassador Haley and Sessions?