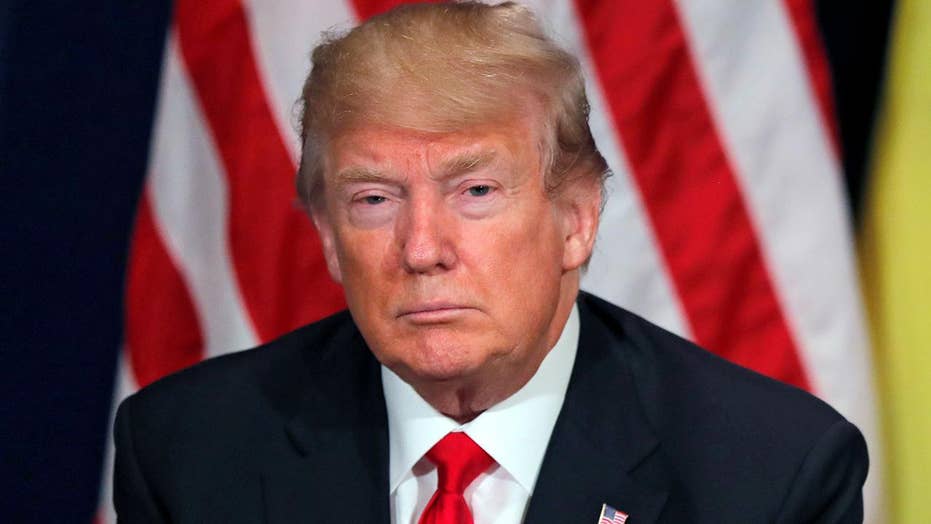 Trump expected to pressure Dems on immigration in SOTU

John Roberts reports from the White House on the president's speech preparations.

The future of President Trump’s first term—and prospects for a second—hinge on the forthcoming immigration battle; so he shouldn’t say anything in Tuesday night’s State of the Union Address that locks him into a bad deal.

And that is what’s on the table now: a bad deal.

Tax cuts, tax reform, and ObamaCare repeal have long been a part of the Republican Party orthodoxy, but the issue of immigration has set Trump apart since day one of his candidacy. He single-handedly elevated border security, citizenship, and national sovereignty to the top of the national debate—much to the chagrin of not just Democrats, but corporate and establishment Republicans who have long (and quietly) favored amnesty and open borders.

The president’s “deplorable” supporters love him for unapologetically pointing out obvious truths long-since abandoned in Washington: the rule of law matters, borders should be enforced, immigration policy should be rational, and patriotism should be the centerpiece of unity. Their love for him is even stronger today than on Election Day, but that support, and ballot box enthusiasm, could be shaken by a bad deal on immigration.

On Thursday the White House hastily released a blueprint for a future immigration deal. The general contours include $25 billion for border security and enforcement, a curtailing of chain migration, and an end to the diversity visa lottery program in exchange for a pathway to citizenship for 1.8 million illegal immigration brought here has children—twice the number ever publicly discussed by this White House.

Many supporters of the president declared the framework a brilliant negotiating tactic. Democrats, they say, would be foolish to reject a deal that affords amnesty to three times more illegal immigrants than President Obama ever did; and if Democrats do reject the deal, it proves they don’t actually want to solve immigration and are the obstructionists the president says they are.

Cutting the wrong deal would mean getting all of the amnesty with little of the wall—a lose/lose outcome the president, and our country, cannot afford.

But don’t we already know that? When will Republicans finally realize Democrats won’t work with this president? And if some Senate Democrats eventually do cross the aisle, the reason matters greatly—electoral imperatives are good, political giveaways are not. Democrats have staked their entire future on resistance, Russian collusion/obstruction, and eventually impeachment—not policy. This deal should not be about revealing Democrats for the hypocrites they are, but about securing our borders.

Pro-Trump Republicans are unsure how to react to the offer, flummoxed by a sudden willingness to grant full citizenship (why citizenship?) to twice the number of illegals than previously discussed; and thus face a real choice: listen to the Establishment and accept a highly-flawed deal for the sake of a win or keep remembering the “Forgotten Man” and fight hard for lawful American citizens before illegal immigrants—unlike the Democrats.

I believe strongly in the latter approach—not because I don’t trust President Trump to make a good deal, but because I don’t trust Congress to implement that deal. If Trump could wave a magic wand for the future, even with the current proposed framework, we would get permanent security measures and immigration restrictions in exchange for amnesty for 1.8 million illegals. Not a good deal, but defensible. However, future administrations and unaccountable bureaucracies will be left to implement any such deal—an untenable situation based on the history of previous immigration deals: amnesty always happens, security never does.

The solution at this important moment starts and ends with timing. As part of a future “deal,” any narrow pathway to legal status for illegal immigrants should only be triggered after the wall is fully funded and being built, chain migration changes have taken effect, and the diversity visa lottery program has ended—to include the backlogs of the latter two programs. Only after these phases are codified and happening, should a strict “one strike, you’re out” pathway for non-citizen, non-voting legalization happen for select illegal immigrants.

For conservatives who support this president and his policies, demanding that the timing be done right is the best way to ensure we do not get hoodwinked—yet again. We know we can trust President Trump; but we also know we cannot trust this Congress, future presidents, and the permanent government bureaucracies to implement the policies faithfully. To believe so would be sheer idiocy. Instead, demanding the right timing is the most fertile ground to fight on.

Tuesday night’s State of the Union is the right place to make this case—and the worst possible place to advance the current deal. All words matter, but words on this night matter even more. Trump supporters expect a wall, not amnesty. They will remember those details come 2018 and 2020. Cutting the wrong deal would mean they get all of the amnesty with little of the wall—a lose/lose outcome the president, and our country, cannot afford.