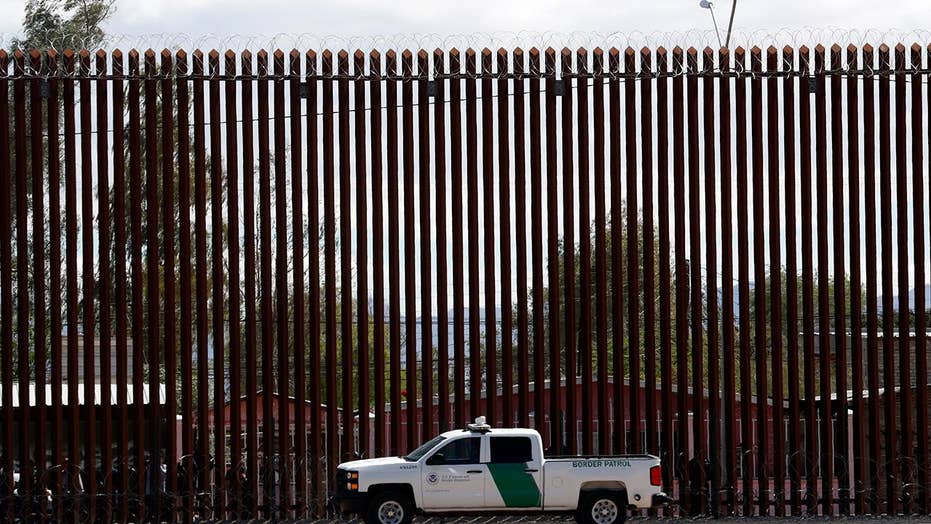 DHS: The only way to fix the border crisis is more money

Parse the Declaration of Independence and you will find nothing about governments instituted among men to secure the rights of international agencies. Nor does the United States Constitution mention “We the Commission.” And yet there seems to be confusion over who our government serves, and, more importantly, where sovereignty resides.

Near Sunland Park, N.M., the International Boundary and Water Commission (IBWC) initially ordered a privately funded section of border wall to be kept open indefinitely. The half-mile long barrier was paid for by a round of crowdfunding that has raised over $24 million through GoFundMe. As the cliché goes, “this is what democracy looks like.”

TRUMP: DEMS COULD HELP SOLVE BORDER CRISIS IN '15 MINUTES TO AN HOUR' WITH ONE WH MEETING

However, Brian Kolfage, a veteran and triple-amputee who heads the We Build the Wall group that built the section of border wall, tweeted subsequently: “The gate is locked 24//7 we will open it when the IBWC wants entry at prescheduled Times.” He also tweeted June 14: “Our border wall has not been breached! Zero crossings onto the land owners property who was overrun! Even with the IBWC opening the gate periodically! WIN WIN WIN.”

This is a welcome development and hopefully will be allowed to continue to protect our border.

The veteran-owned nonprofit We Build the Wall was conceived in frustration at relentless illegal immigration and a desire to provide for the common defense – that is, technically, the primary purpose of the federal government, but one that it has so far failed at.

The Trump administration has commenced construction of border wall in areas where none stood before but House Democrats are refusing to approve needed funding President Trump has requested to build large sections of the wall. In other words, a private nonprofit accomplished more in a few days than the federal government has in the last two years.

Customs and Border Patrol reported May apprehensions at the U.S. southwest border at 144,000 – compared to only 51,000 apprehended in May 2018. A group of 1,036 illegal immigrants found in the El Paso sector – the largest ever apprehended at a single time – were intercepted by Border Patrol May 30. May was the third consecutive month that more than 100,000 illegal immigrants were detained.

No fewer than 168,000 illegal immigrants have been released by Immigration and Customs Enforcement (ICE) into the country this fiscal year, to make room for all of the new arrivals, who will themselves eventually be released at this rate. Around 87 percent of all those released do not appear at their immigration court hearings.

We Build the Wall should be commended for its public service. When IBWC officials initially padlocked the gate open, they complained that the wall had been constructed on a whopping 33 feet of federal land. The agency also claimed that the gate blocked officials from accessing a levee and dam, and obstructed public access to monuments that mark the U.S.-Mexico border.

“We the People” cannot claim to have the final say in our own affairs if an external force in the form of another power – such as a water commission – is able to back up its own claim to that position.

The IBWC's haughtiness betrays the real reason the gate was initially locked open, and it has nothing to do with levees, dams or lonely monuments.

Who does the IBWC serve? Officially, it is a joint agency of the United States and Mexico, primarily tasked with demarcating the location of international boundaries along rivers with waters that lap the shores of both countries. There are Mexican and United States sections of the agencies, the heads of which are appointed by their respective presidents.

Contemporary scholars have described the IBWC as a “dangerous anachronism, left behind by twenty-first century social, environmental, and political issues that it is unwilling or unable to address.”

Allies and critics alike say it is secretive; beholden to regional agricultural interests; indifferent to disappearing water sources; apathetic about associated ecological crises; abusive to its employees; lacking essential diplomatic and professional skills; unresponsive to the needs of a growing population. The Public Employees for Environmental Responsibility has labeled the IBWC as “arguably the most incompetent and abusive agency in federal service.”

Despite this uniformly negative reputation and legendary incompetence, the IBWC “considers itself an independent federal government agency whose leader is answerable only to the President.” That is, the agency claims that it is above our elected Congress, and its claim to sovereignty second only to the president himself.

The groups that can be said to benefit most from the most recent abuses of the IBWC, then, are the agency itself, and, indirectly, foreign nationals and the Mexican government. This dilemma reveals the problematic nature of international bodies like the water commission.

Sovereignty, by definition, concerns the issue of internal autonomy and external independence. “We the People” cannot claim to have the final say in our own affairs if an external force in the form of another power – such as a water commission – is able to back up its own claim to that position.

Organizations such as the IBWC can, even if it is unintentional, affect policy outcomes on behalf of one nation against another. Whereas our Declaration affirms that Americans have a right to “dissolve the political bands which have connected them with another,” the IBWC’s says "that's now how it works."

The purpose of our government is to support and defend the wellbeing of the people for whom the Constitution was designed – the American people. It might seem quaint to believe that our government still is “of the people, by the people, for the people,” but President Trump’s base, exemplified by the good people at We Build the Wall, is still willing to fight for that ideal.