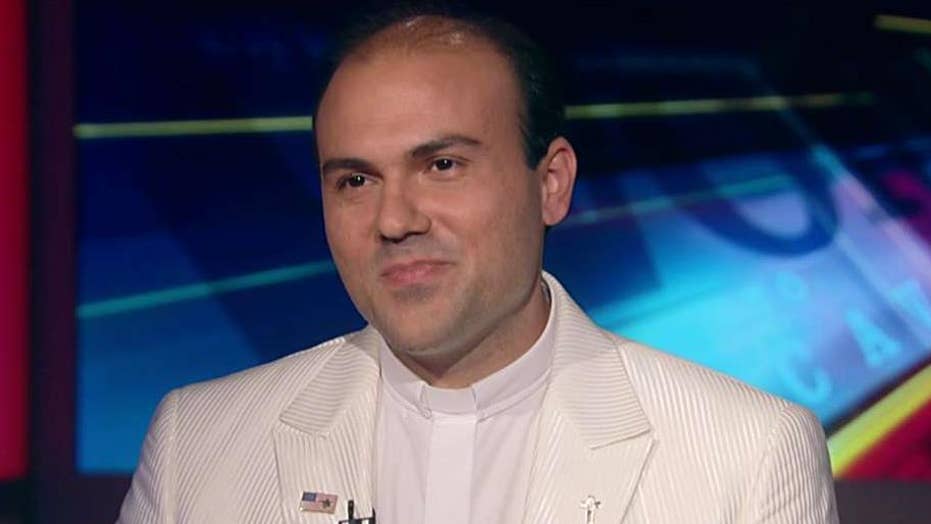 Freed American hostage weighs in on 'Your World'

You may recognize my name. I’ve been in the news recently because I was one of the three prisoners with dual US-Iranian citizenship that Iran released in January. This week I was scheduled to testify to a congressional committee but my testimony was cancelled.

I was set free the same day that the Obama administration paid the Iranian government $400 million dollars in cash.

Here’s how it happened:

I knew some people involved in the process legitimately cared about me, but I also know the truth. I am not free because I am a U.S. citizen. I am free because I was useful for negotiations. And only for a brief moment in time. If I hadn't been useful I would still be there.

When I was 14 years old, Hezbollah – the Iranian terrorist militia – recruited me. They said I was one of “the best and the brightest” of young Iranians and they had big plans to groom me as a jihadi warrior, fighting Iran’s enemies.

At first I was dazzled by this golden opportunity, but didn’t take long to figure out that the mullahs who were in charge were not especially pure and righteous.

More and more I asked myself, “Is this really Islam?”

A few years later, I left Islam altogether. In 2000, I converted to Christianity and gained a wonderful new life.

But it was a dangerous decision.

Even more dangerous was my preaching. But, I was determined to serve God and not man.

Then, on September 26, 2012, I was arrested and locked up in Iran’s notorious Evin Prison.

The cruelty of Iran’s prison system is notorious. They violate the human rights of those imprisoned for sport. I was severely beaten during interrogations, kept in solitary confinement for long periods of time, lied to, threatened, and frequently abused. On one occasion, I suffered life-threatening internal injuries. This continued for 3 and a half years. I am a U.S. citizen.

I had been through so much violence and deception that I didn’t know what to expect.

I prayed and tried to calm myself, but remained uneasy, even when I was told that I was to be released and flown to America.

Soon two other American prisoners and I were driven from Evin Prison to Mehrabad Airport.

“The plane and the pilot and everybody else is ready,” one of my former interrogators told me. “You’re going to be free.”

But it didn’t happen that way. At the airport, we waited while an Iranian intelligence officer talked on a cellphone just beyond our hearing.

“Something has gone wrong,” he reported after he hung up, “and you can’t leave yet.”

Instead, the three of us were led into a closed room – no windows, no way out, no further information.  We guessed that the Iranian authorities were playing psychological games with us. Again. It was one of their favorite tactics.

After many hours, we heard the latest spin: Our plane couldn’t take off until another aircraft had arrived.

Something was also said about money changing hands.

At the time I didn’t believe it – I thought America would never give Iran money. As much as I was concerned for my own well being, I knew the mullahs. I knew they would use that money to torture thousands more people, maybe hundreds of thousands. They would use it to boost their power on the backs of the millions of Iranians who are good people and who want freedom.

I wanted to be free so badly, but I didn’t want my freedom to cause more death and more torture.

In the end, it wasn’t my decision.

We tried to sleep as we awaited our release, increasingly unsure what the next day would bring.

Finally, after 20 hours we were led to a plane. We buckled ourselves in and I breathed a sigh of relief when the aircraft finally left the ground.

Only months later did I learn about the $400 million in cash that was loaded on the “other” airplane.

That’s why I’m speaking out now.

I knew some people involved in the process legitimately cared about me, but I also know the truth. I am not free because I am a US Citizen. I am free because I was useful for negotiations. And only for a brief moment in time. If I hadn't been useful I would still be there.

During the 3 and a half years of my imprisonment, there was no income for my family. When I returned to America, I was virtually homeless. My wife, my family and I were victims of unbelievable trauma. We are still suffering because of it in countless, painful ways.

Yet I was informed when our flight from Iran landed in Germany that I would have to buy my own plane ticket back to the US. They didn’t even intend on helping me get home. Without the kindness of friends like the Rev. Franklin Graham, I would have been stranded in Germany. In spite of all I had experienced, I felt completely dispensable.

How could so many people go to such great lengths, including a airplane full of $400 million in cash, and yet a plane ticket home for me was, as I was told, “not in the budget.”

I love America and am proud and honored to be an American citizen. I am so grateful for all those who advocated for my release: pastors and church-goers, Democrats and Republicans.

But it is clear to me that I was a bargaining chip in a much larger political game. And once that process was over, well, I nearly had to buy my own plane ticket home.

Today I am deeply thankful to God and the United States that I’m free. Please, do not read an ounce of ingratitude in this.

But as a Christian, I was willing to die for my faith.

Now for the rest of my life I will wonder if my freedom has made it financially possible for Iran to abuse and imprison countless others – those like me who reject their radical theology and dictatorial oppression.

If that’s the case, I pray I can make up for it with my own courage and commitment. The Iranian regime is the single greatest financier of terrorism in the world and the foremost abuser of human rights.  They kill innocent people for fun. I’ve seen it with my own eyes. Now they can kill with some American money.

That’s what I would have told Congress this week if I had the chance.

Saeed Abedini is an Iranian American citizen, a Christian convert from Islam, a speaker, and an advocate for human rights and religious freedom. He can be reached here.