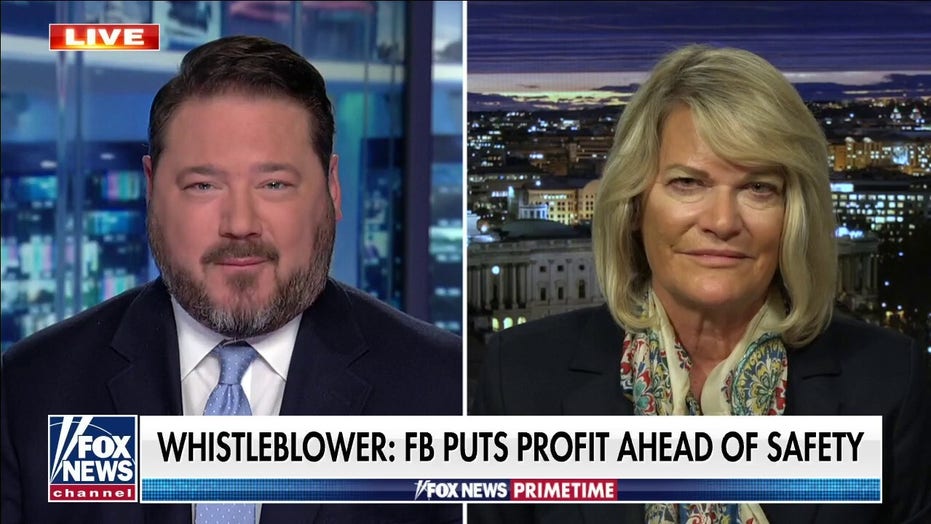 Republican Wyoming Sen. Cynthia Lummis criticized what she believed was Facebook's unwillingness to put safety ahead of profits on 'Fox News Primetime.'

As a father of nine children between the ages of 22 and 2, I am all too familiar with the gravitational pull social media has on young people, whether it’s Tik-Tok, Instagram, Snapchat or the ever-growing number of popular social media apps.

As parents, my wife, Rachel, and I struggled for years with the decision and pressure to put such a highly addictive device into the hands of our impressionable children.

Once we let our kids have a phone, we worried about whether they were the right age and how to impose limits. Since our kids are far more tech savvy than we are, we wondered if they were finding ways around our rules, and if we were doing enough to warn them about the dangers phones present, like sexual predators, pornography and filters that distort faces and perpetuate body dysmorphia and anxiety.

When our oldest was a freshman in high school, we let her have her first iPhone. The next two kids, now 19 and 17, were allowed to have a phone in middle school, eighth grade. We now know that that was a naive and bad decision. Kids should never have a smartphone before the age of 16.

We thought we were doing the right thing by giving them a device to navigate the crazy Duffy family schedule and to stay in touch with each other as a family. While it did allow for better family communication, it also meant our children could download social media apps and start communicating with friends and the world without our parental oversight.

The consequences were significant. Once the phone was introduced, family time suffered and their exit from childhood accelerated. Their exposure to content we would never have approved of became inevitable.

We also noticed they seemed less happy, more self-critical of their bodies, and even less social – which seemed counterintuitive from a product called "social" media.

That’s right, our kids believed they were hanging out with friends through their screens. They asked us to go out with friends far less than we recall begging our own parents to let us go out when we were their ages.

Kids across the country spend countless hours a day consuming content on screens. Most of the time, they are viewing posts and pictures from their friends and celebrities. What most parents don’t know is their children are also receiving unsolicited content curated for them by the radically liberal operators of the apps.

The consequences for children have been catastrophic. The average age for encountering online pornography is 11 years old and dropping rapidly. This has devastating impacts on how young people form their ideas about sex and relationships. In addition, thanks to filters and other distorting body image features, spending time on social media increases anxiety and decreases self-esteem in girls.

Through the whistleblower testimony of Frances Haugen, a former Facebook product manager, we now know that Facebook’s own internal research confirms what we parents have seen first-hand. As children increase use of social media apps like Instagram (owned by Facebook), their feelings of loneliness, isolation, depression, self-hate and rejection increase.

Despite being in possession of hard data proving the emotional and psychological toll their platform is taking on an entire generation’s mental health, Facebook chose to hide their findings from parents.

Worse, rather than protect our kids, they used the data gleaned from our children’s interactions with their product to create features and algorithms to actually increase the time our kids spend on their platforms. Why would they do something so pernicious? It’s simple. Profit.

The more time young people spend on the platform, the more money Mark Zuckerberg and his shareholders make from digital advertisers. It’s the same profit calculation that cigarette companies made generations ago when they learned about the health risks of their product, especially on children.

Without action from the Congress and the social media platform itself, what are parents to do? Well, one of the benefits of a large brood that spans over 20 years is that you get second chances. Rachel and I have learned from our rookie parenting mistakes and we’re determined not to do it again with the younger kids.

WHISTLEBLOWER SAYS FACEBOOK IS A US 'NATIONAL SECURITY ISSUE'

First, we now know for certain that social media is bad for our children’s health and safety. We don’t give them cigarettes, why would we give them a phone? These apps are designed to entice and tempt them to spend more time on their phones and less time engaging in real relationships with their family and friends. It takes them away from their studies, good books and authentic living.

Finally, we now understand that social media isn’t just about young kids communicating and sharing posts and pictures with one another. Social media platforms like Instagram, Snapchat and TikTok are also the most powerful tool of the Left, and they are constantly pushing content to my children that does not match the morals and values of our family. Without any solicitation, they push sexualized content, radical gender ideology, socialism and Marxism to my children.

MICHAEL GOODWIN: FACEBOOK IS TOO BIG TO REGULATE, TOO POPULAR AND TOO IMPORTANT FOR CONGRESS TO TACKLE

After a year of school on zoom, parents have woken up to the Left’s mission to indoctrinate their children. Many good parents are fighting school boards, teachers and dangerous curriculums in our public schools.

But what far too many parents don’t realize is that our children’s phones and social media apps may be doing more harm than their Marxist teachers and professors could ever do in the classroom. America’s children are being inundated with far-left radical ideology from Silicon Valley’s social media titans and the millennial content curators who work for them.

It is terrifying to know that there are people who want to reprogram my children by modeling them into social justice activist robots and separating them from the religious and cultural values my wife and I work hard to instill in them. Fortunately, my family’s solution has been simple: Just say no to phones.

This hasn’t been easy. Our middle schooler is constantly pleading her case. She’ll tell you we ruined her life. There’s no question that there are times she feels left out from her peers. I don’t care. Her health and safety are more important.

And why the heck would I give the radical Left unsupervised access to my kids and assist them in their mission to indoctrinate and separate them from our family’s conservative values? Hard pass on that one.

When it comes time to finally give them a phone, it won’t be a smartphone, it will be a good old-fashioned flip-phone that can’t connect to the social media platforms that are intent on destroying their childhood and innocence.

As for my high schoolers with a smartphone, all is not lost. I’ve learned how to install apps that limit their daily use to the exact amount of time I think is right for them. When they reach the limit, their social media simply shuts down until the next day or week.

I’ve also made taking away my teenagers phone my preferred form of punishment. Taking away their phone for days or even weeks provides them with a social media "fast" that’s actually good for them.

After they get past the anger, the boredom and the fidgeting, they start finding better things to do – like reading or, (gasp!) talking and interacting with humans. If you’re lucky, you may even get an admission from your teenager, as I did once, that they actually feel happier without their phone.