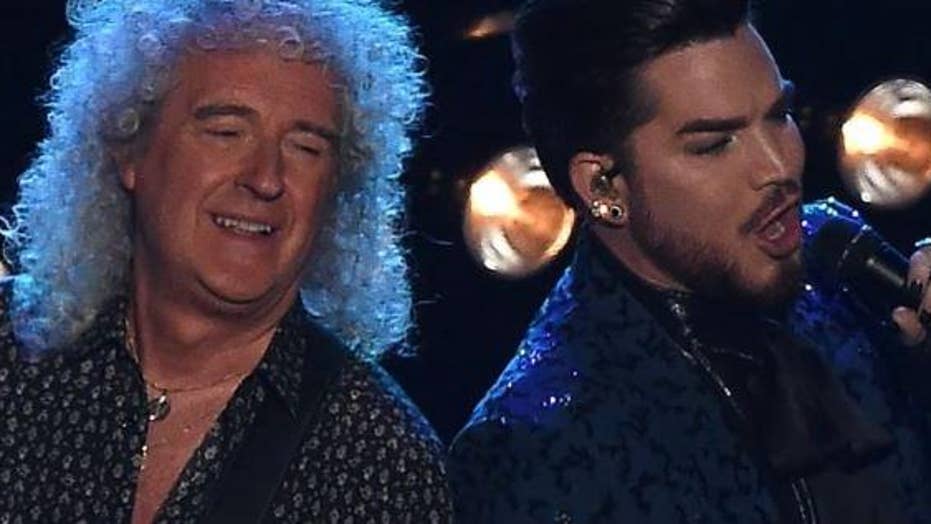 Despite having no host, the Oscars begins with a strong performance by Queen as well as a comedic monologue by Tina Fey, Amy Poehler, and Maya Rudolph.

The 91st annual Academy Awards opened with "American Idol" runner up, Adam Lambert doing a poor man’s Freddie Mercury. It was a good allegory for the evening.

The entire ceremony felt as if it was trying to be something it was no longer capable of being: mainly accessible to anyone other than those in the room.

On a set that looked like the opening of a metallic cave envisioned by Georgia O’Keefe during a nightmare, Americans had to suffer through a disjointed evening of people they had never seen before, awkwardly saluting other unknown people for films that the audience just didn’t care that much about--or even know.

Billy Wilder may have been prophetic when he wrote in his classic, Sunset Boulevard, “I am big, it's the pictures that got small.”  The pictures have now gotten so small we watch them on our phones, and the stars have all but vanished.

There are no Hollywood stars or films that unite the American people as they once did.  As a result, the 91st Academy Awards felt particularly false. Everyone was trying too hard to score points with their friends in the room or overcompensate for the slights of the past. The one thing that they seemed to forget was the audience.

Maya Rudolph (surrounded by her “SNL” sisters, Tina Fey and Amy Poehler) kicked things off with a most telling line, “There is no host tonight, there won’t be a popular movie category, and Mexico will not pay for the wall.” Way to remind the audience that no one was pure enough to host this year’s Oscars, there is no single film that unites the audience, and that most of the people in the Kodak Theater share a political bias. Watch the ratings plummet.

Instead of working hard to entertain the viewing audience, the honorees turned the evening into an exercise in political grandstanding.

There are no Hollywood stars or films that unite the American people as they once did.  As a result, the 91st Academy Awards felt particularly false. Everyone was trying too hard to score points with their friends in the room or overcompensate for the slights of the past. The one thing that they seemed to forget was the audience.

Best Documentary Short winner, Rayka Zehtabchi accepting for her film, Period. End of Sentence, bleated: “I’m not crying because I’m on my period or anything.  I can’t believe a film about menstruation just won an Oscar.” (Neither could we!) She then thanked the subjects of her film: “Know that you are empowering women around the world to fight for menstrual equality.”  I could imagine viewers in Iowa turning to each other asking, “What is menstrual equality?”  Similar questions were heard where I watched the Oscars.

Spike Lee, winner of Best Adapted Screenplay for his BlackkKlansman acceptance speech was brazenly political. “The 2020 presidential election is around the corner,” Lee screamed. “Let’s all mobilize, let’s all be on the right side of history. Make the moral choice between love vs. hate. Let’s do the right thing!” Original.

Barbra Streisand later showed up to endorse BlacKkKlansman and couldn’t help mentioning that the racial situation in the 1970s is “still relevant today.”  But from 1970 through 1979 not one major Oscar was awarded to a black actor, actress, or director.  Just this year Regina King, Mahershala Ali, and Spike Lee all won Oscars. There were a host of African-American singers and comedians featured-- even Civil Rights Activist, John Lewis was on hand to introduce the movie, “Green Book.” To pretend that racial progress has not been made is madness.

There was also a profusion of non-filmmakers bizarrely littering the ceremony from top to bottom. Chef Jose Andres (who has zero connection to the film industry) introduced the Best Film nominee, Roma, claiming that it “reminds us of the understanding and compassion that we all owe to the invincible people in our lives—immigrants and women—who move humanity forward.”  As expected that got a hearty round of applause at the Kodak from mostly non-immigrant men and women.

Trevor Noah, who aside from a voiceover has never appeared in a movie, introduced the Best Picture nominee, “Black Panther” (but not before taking a cheap shot at Mel Gibson, who you might remember actually has appeared in several movies and won a few Oscars along the way).

There were hardly any moving moments in the tiresome three hours.  A standout was Best Supporting Actress Winner, Regina King who spoke of being nurtured by love. She then told her mother, “Thank you for teaching me that God is leaning in my direction.” That was one of the few moments that probably played well outside the theater.

Attempting to resurrect some old school excitement, the producers inexplicably booked Bette Midler to sing a tender song from the Mary Poppins reboot, “The Place Where Lost Things Go.”  Perhaps Ms. Midler’s voice was there.  They would have been wiser to send a car for Angela Lansbury, who was actually in the movie and can still sing quite well.  To have Lansbury sing the song with say, Dick Van Dyke (who was also in the Poppins reboot) might have been quite touching.  But indelible memories are clearly not what the producers had in mind for this Oscars.

Let’s face it, aside from “Bohemian Rhapsody” and “Black Panther,” all of the nominated films were little more than art house flicks—including the best picture winner, “Green Book.”  None of them are likely to be remembered decades from now in the fond way that “The Godfather,” “Rocky,” “Braveheart” or “Schindler’s List” have been. And as for the 91st Oscars, when the most memorable moment of the evening is Billy Porter wearing a tuxedo dress, it’s time for the Academy to reimagine its big night and for goodness sake, find a decent host.

Raymond Arroyo is the New York Times Bestselling author of "The Spider Who Saved Christmas" and a Fox News and Fox Nation Co-Host and contributor.