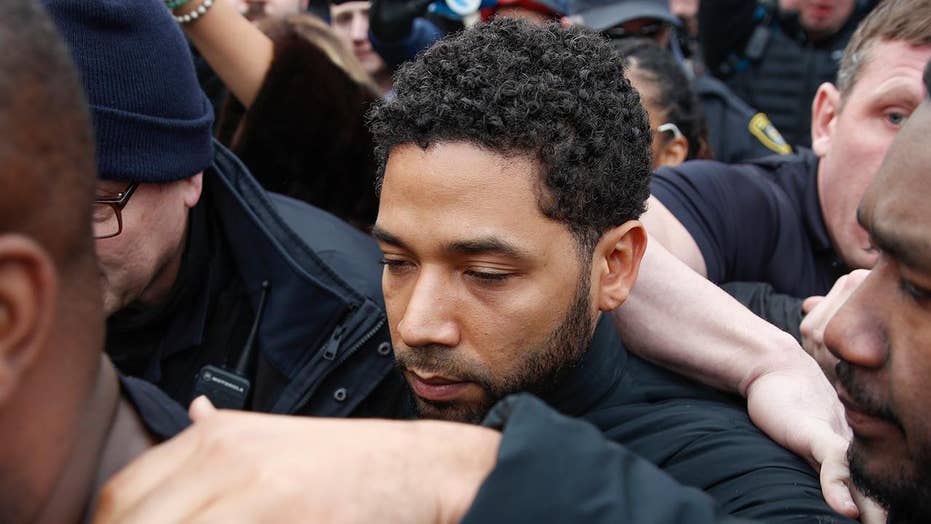 From Supreme Court Justice Brett Kavanaugh to the Covington Catholic kids to Jussie Smollett, many in the media have been quick to judge and slow to apologize.

It’s deeply disturbing how news coverage has often been turned into a propaganda machine, continuing to forge ahead with false narratives with no regard for truth. Facts just seem to get in the way.

In their hatred of Donald Trump and their desire to destroy a sitting president, the anti-Trump media have traded all journalistic objectivity and become completely desensitized to the fact that the American people continue to lose trust in them.

JUSSIE SMOLLETT GOT LOTS OF OXYGEN FROM CNN, OTHER NEWS OUTLETS – NO WONDER PEOPLE DON'T TRUST THE PRESS

“Empire" actor Jussie Smollett was arrested Thursday and accused by Chicago Police Superintendent Eddie Johnson of orchestrating a “phony attack” to take “advantage of the pain and anger of racism to promote his career.”

Smollett, a gay African-American, last month reported the elaborate claim that two masked men yelled “this is MAGA country” while they beat him, threw a supposed chemical substance on him, put a noose around his neck, and spewed homophobic and racist insults before fleeing. Police say the attack never happened and that Smollett lied about it.

President Trump called out Smollett, tweeting “what about MAGA and the tens of millions of people you insulted with your racist and dangerous comments!?”

Even as Smollett’s story was falling apart, CNN’s Don Lemon asserted on air it wasn’t Smollett’s fault and he lost in the court of public opinion.

Of course he did … because he made the whole thing up! Never mind that. I guess we’re still supposed to feel sorry for him so we don’t disrupt the media’s racist, homophobic tale of Trump supporters.

After Smollett’s initial report of the incident, members of the news media, not to mention Hollywood celebrities, couldn’t wait to get their fingers moving and come to his defense. The New York Times even tweeted the “attack” out as fact.

Twitter needs to invoke a 15-minute minute delay before it posts a tweet. This way your brain has a chance to move faster than the speed of your fingers, and you’re forced to consider what you’re putting out in Twitterville.

Like kids in a candy store, Democratic presidential hopefuls Sens. Kamala Harris of California and Cory Booker of New Jersey couldn’t wait to brand Trump supporters with a hate crime. Just a few hours after the reported crime, Harris tweeted that it was a “modern day lynching.” Booker, who also got Twitter-happy, took it a step further and called for anti-lynching legislation.

Twitter needs to invoke a 15-minute minute delay before it posts a tweet. This way your brain has a chance to move faster than the speed of your fingers, and you’re forced to consider what you’re putting out in Twitterville.

But hey, being first is better than being right. Isn’t that the new news slogan?

Apparently, no one learned anything from Covington. Remember the Covington High School teenagers who were falsely accused of harassing Native American Nathan Phillips at the Lincoln Memorial in Washington? It didn’t take long for the anti-Trump media to label them racists and bigots.

Thanks to video footage that told another story, it became clear it was the boys who were the targets. Many in the media still haven’t apologized for rushing to judgement and prematurely convicting these boys, which resulted in death threats to them and their families.

In fact, rather than admitting they got it wrong, many in the media just pivoted and changed the conversation – but not the blame – to focus on the red MAGA hats the boys were wearing.

From their elite bully pulpit, the anti-Trump media have decided that “Make America Great Again” is a symbol for hate. Therefore, since the boys wore hats with that saying on them they were inviting trouble, so it’s still their fault.

See how they did that. Even when the media are wrong they’re not wrong.

Attorneys for Nick Sandmann, the teenager at the center of the Covington controversy, announced this week he’s suing The Washington Post for $250 million for publishing false stories.

Perhaps if the Post had just apologized, the newspaper could have potentially saved itself $250 million.

Sandmann’s lawyers are likely to file more lawsuits against the media, as well as possibly celebrities and politicians, for their bogus and irresponsible rush to judgement.

As of now the media’s rush to judgement has become the new normal, and they don’t seem to care. Their heavily orchestrated campaign last year to destroy now-Supreme Court Justice Brett Kavanaugh backfired after they treated uncorroborated sexual assault allegations as fact, with no regard for the presumption of innocence or due process.

A study done by the Media Research Center shows that more than 90 percent of the media coverage of Kavanaugh in September was negative.

In a very telling Twitter post prior to Kavanaugh’s confirmation vote, Ariel Dumas, a writer for “The Late Show” with Stephen Colbert on CBS tweeted: “Whatever happens, I'm just glad we ruined Brett Kavanaugh's life.” She later said her anger wasn’t properly conveyed and she had a hard time during his Senate confirmation process.

Poor thing, it was a rough road for her. She clearly never thought about Kavanaugh’s wife or his daughters while she identified with a media intent on destroying their lives, simply because the media have so much hatred for the president.

Instead of apologizing, the media awards itself for all its fake news. Such is the case for New York Times reporters Kate Kelly and Robin Pogrebin, who worked diligently to push the false storyline that Kavanaugh was a sexual predator. Their trophy comes in the form of a book deal. Pogrebin said we all need a “fuller picture” of Kavanaugh.

Sure, and these two straight shooters are just the ones to give it to us. Unless this book is stocked in the fiction section, save your money.

Many in the media have become blinded by their own bias. They’re more interested in stories that prove they’re right than looking for facts to prove a story is right.

The media need to rehab their image. Perhaps instituting a 15-minute freeze on their fingers before they hit social media would be a good place to start. Instead, they can use those 15 minutes for fact-finding missions.

How about some accountability? Reporters are public figures and since the media is in the business of holding public figures accountable, it’s time they start calling each other out when they’re wrong.

The media put themselves on a higher pedestal than the rest of us. Now it’s time they raise their standards to match.