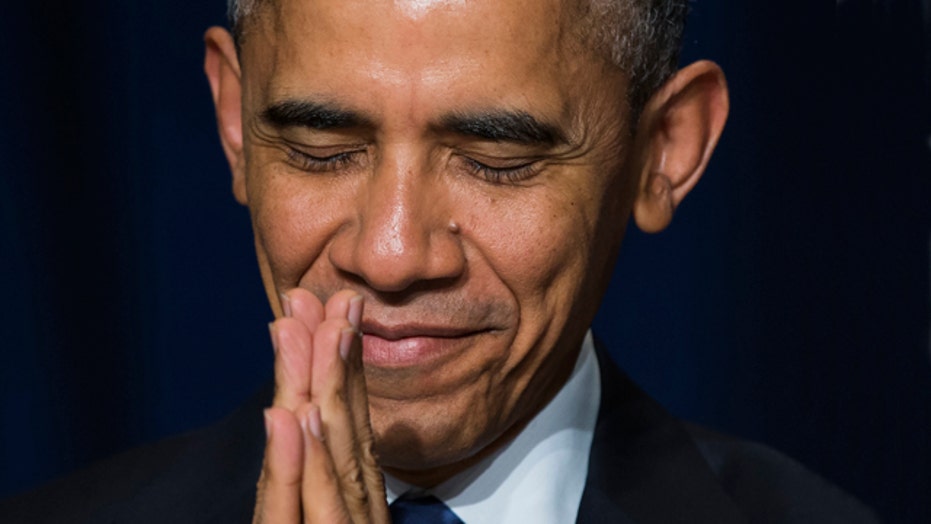 President Obama called on people of faith to reject those who use religion to justify evil – and in doing so – reminded people about the terrible things done in the name of Jesus Christ.

The Crusades ended some 700 years ago.

Obama told a gathering Thursday at the National Prayer Breakfast that we have seen “professions of faith used both as an instrument of great good but twisted in the name of evil.”

The Crusades ended some 700 years ago.

He did not mention radical Islam or jihadists or Islamic extremists. He did, however, call ISIS a “brutal, vicious death cult that in the name of religion carries out unspeakable acts of barbarism.”

The president also issued a word of warning to Christians.

“And lest we get on our high horse and think this is unique to some other place – remember that during the Crusades and the Inquisition committed terrible deeds in the name of Christ,” the president said.

He also chided the United States, “our home country.”

“Slavery and Jim Crow all too often was justified in the name of Christ,” he added.

Robert Jeffress, the pastor of First Baptist Church of Dallas and the author of the upcoming book, “Countdown to the Apocalypse: Why ISIS and Ebola Are Only the Beginning,” said there are two problems with Obama’s comparison.

“When Christians act violently they are acting in opposition to the teachings of their founder, Jesus Christ,” Jeffress told me. “They cannot cite a single verse in the New Testament that calls for violence against unbelievers. On the other hand, radical Islamists can point to a number of verses in the Koran calling for Muslims to ‘crucify the infidels.’”

On Wednesday a United Nations watchdog group reported that Islamic militants were crucifying Iraqi children and burying them alive. Others had been sold as sex slaves and boys as young as 18 had been used as suicide bombers, Reuters reported.

“They are following the example of their founder Muhammad who slaughtered and beheaded those who opposed him,” Jeffress said.

While the Crusades were terrible, Jeffress pointed out they were a response to hundreds of years of Muslim aggression – an issue he writes about in his book.

As you might imagine – the president’s remarks did not go over well among conservatives. My friend Michelle Malkin put it nicely:

I was puzzled by something else President Obama said: "We are summoned to push back against those who would distort our religion for their nihilistic ends."

What did he mean by “our religion”? Whose religion? And why did he compare the Crusades to ISIS?

The Crusades ended some 700 years ago. Perhaps the president should be a bit more concerned with the Islamic jihad being waged in this century.