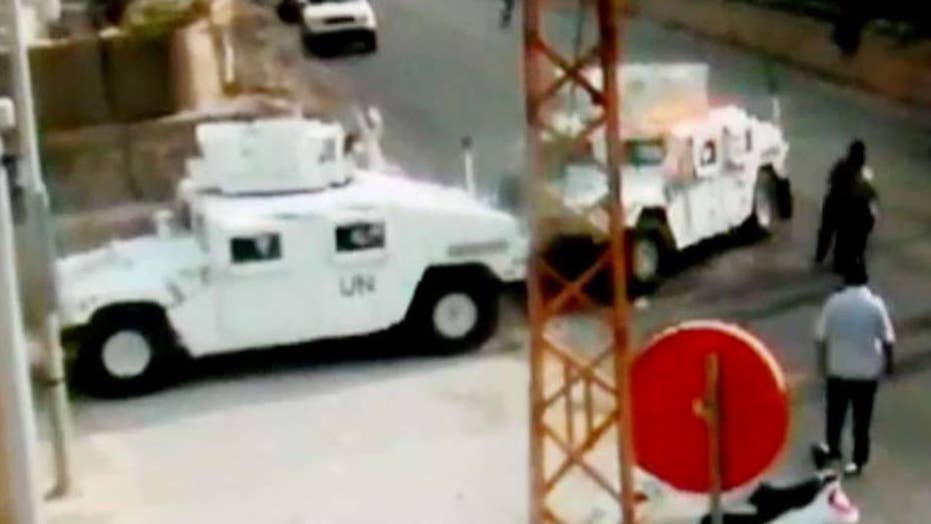 Video surfaces of UN peacekeepers under attack in Lebanon

Hezbollah believed to be responsible for the ambush that happened 5 miles from the Israel border; David Lee Miller reports.

Catholics, Orthodox Christians and Protestants are now at risk of disappearing in Lebanon – following the desperate flight of most Iraqi and Syrian Christians this century.

Lebanon is disintegrating under the grand-scale corruption of its political class, and the corrosive effect of Iranian proxies acting as a state within the state.

In a depressingly familiar pattern when order breaks down in the Middle East, Christians are targeted. This point was underscored Monday in turbulent northeastern Syria, when ISIS assassinated an Armenian Catholic priest and his father.

The Trump-Pence administration deserves credit for elevating religious freedom as a major foreign policy concern, and for making the protection of vulnerable religious minorities a national security priority.

The U.S. now needs to turn to Lebanon – not with troops or more aid, but with vigorous diplomacy.

Since Oct. 17, protests in Lebanon have raged against corrupt political elites and the Hezbollah terrorist group. This mass uprising can lead to a dangerous state of prolonged national chaos. But it also offers unprecedented hope for reform – if U.S. diplomatic leadership responds to protesters' demands and helps them shed their country’s status as a gangster-governed, Iranian “client state."

About a quarter of Lebanon’s 5 million citizens, deeply divided by sect, have come together in street protests, including factions from its main religious groups: Christians, Shiite and Sunni Muslims, and Druze.

Chanting “all of them means all of them,” they are demanding that government officials, irrespective of religious identity, be replaced with technocrats.

For the first time, members of its Shiite base are condemning Hezbollah – a U.S.-designated terrorist group that murdered 241 U.S. Marine and Navy peacekeepers. And along with its patron Iran, Hezbollah threatens Israel.

A third of Lebanon's government ministries are controlled by Hezbollah and its allies, and those ministers are among those who must go, the protesters insist.

They accuse the government, which operates without budgets or transparency, of pilfering billions of dollars. This, plus mismanagement, gives Lebanon the world’s third-largest debt-to-GDP ratio. Its hard currency reserves are low and hyperinflation looms.

Lebanon’s banks are sharply restricting withdrawals, which, in that import economy, is shuttering gas stations, bread stores and other businesses. Moody's recently downgraded Lebanon deeper into junk bond territory and warned of its expected default on debt obligations. It is unlikely Lebanon will be bailed out, nor should it be. Not yet.

U.S. policy on Lebanon remains defined by a pressure campaign against Hezbollah. America's response to the protests has been weak. In an important Senate speech on Oct. 31, Majority Leader Mitch McConnell, R-Ky., implored the administration to “use the tools at its disposal” to help the protesters.

On Oct. 24, U.S. Ambassador Elizabeth Richard, appointed under President Obama, posted a tweet of an unnamed “Sr State Dept official” that avoids all mention of the protesters and urges “the Lebanese people and their leadership” to have a “discussion” about the country’s future. On Oct. 29, Secretary of State Mike Pompeo issued a statement calling for “Lebanon’s political leaders” to form a new government.

The protesters emphatically assert that these leaders are incapable of building a “stable, prosperous, and secure Lebanon." They point out that Pompeo recognized that in his Nov. 4 tweet denouncing Iran’s meddling in Lebanon.

This week the first protester was shot by the Lebanese army. Any day, the army could completely lose control. If that happens, Lebanon would likely become a Syrian-style battleground of sectarian militias. Mass slaughter, rape and displacement would harm all groups, particularly the Christian minority.

Christians, who lack militias, would be left without protection. This 2,000-year-old faith community could be driven out overnight.

Comprising 36 percent of the population, Lebanon’s church represents the largest proportion of Christians in any Middle Eastern country. The region’s remaining Christians would be shaken to the core with the loss of Lebanon as home to several Christian patriarchs and a safe haven in times of genocide.

Pompeo should shore up America’s diplomatic presence in Lebanon with the prompt appointment of a knowledgeable special envoy. With Lebanon as the single portfolio, this envoy should do the following:

Hasten the departure of corrupt officials with targeted sanctions that freeze their personal bank accounts, block funds and deny them travel visas under the Global Magnitsky Act.

Work to build a consensus around an interim technocratic government to draft a new election law, oversee free and fair elections, and institute World Bank reforms.

Recruit allies and Lebanon’s prosperous diaspora to pledge aid and investment as incentives for a reformed government.

Such fortified diplomacy could establish the foundation for good governance and further the Trump administration’s policy of protecting vulnerable religious minorities.