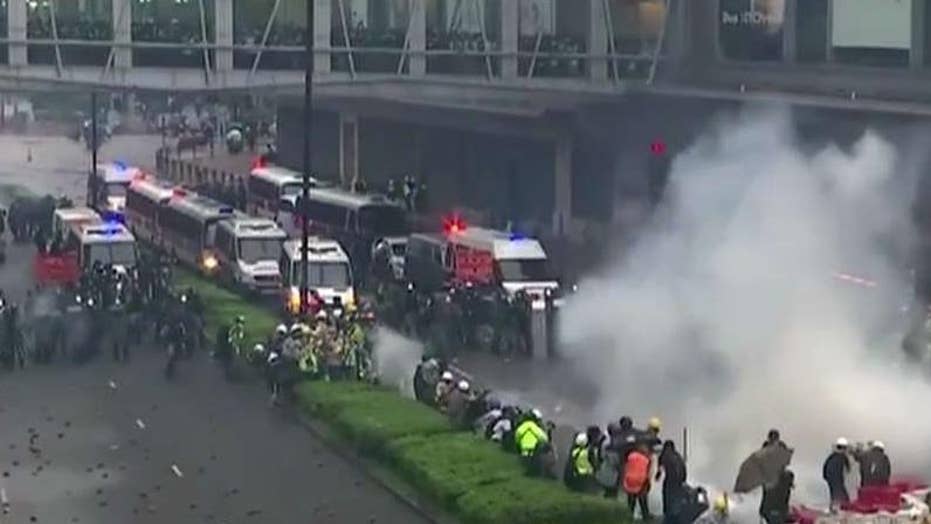 Police in Hong Kong use live fire for the first time in the pro-democracy demonstrations; Kitty Logan reports on the response to the renewed clashes.

The images of protesters tearing down towers equipped with Chinese face recognition technology tell the world some of what’s at stake in their clash with China’s dictatorship. But there’s much more.

More than anything else, the Chinese Communist government seeks control of its own people, Hong Kong, and a widening region of Asia and beyond. That puts major American interests at risk.

Hong Kong, which is about the size of New York City, is one of the world’s leading financial centers. For many years it was a British colony, but in 1997 Britain transferred authority to China on condition that China would preserve key democratic institutions for 50 years.

Less than halfway through that period, China is on the verge of crushing Hong Kong’s freedoms. If China succeeds in doing that without paying a heavy price, the results will make all of Asia far more dangerous.

The United States absolutely does not want war with China. That means we don’t want to encourage Chinese officials to take actions that make the world less stable and less safe. Americans should understand that the fate of Hong Kong is part of a larger strategic picture in which we have a lot at risk.

The Hong Kong crisis arises from the increasingly aggressive authoritarianism of China’s President Xi Jinping. He is driving the Chinese Communist Party to tighten control over Chinese society, commerce and information.

Xi has made the Chinese government far more oppressive domestically and far more aggressive abroad. As a result, political instability inside China is increasing; public protests are increasingly large and numerous.

Meanwhile, China has been boldly pushing its neighbors around, sinking their fishing vessels, destroying their infrastructure, and conducting subversive political operations within their countries.

Hong Kong is now the site of the largest protests in modern Chinese history. If they continue, the Chinese government has two choices.

China can back down and allow the people of Hong Kong to retain their freedoms, as it promised to do for at least another 28 years. Or it can crush the Hong Kongers. Given President Xi’s record, there is reason to fear the worst.

China has the power to use force to end the Hong Kong protests. No outside power will prevent that, and America will not and should not go to war over Hong Kong.

But what if the world does nothing? What will Asian security look like if Chinese leaders think they can take such violent action without any penalty?

China’s political, diplomatic, economic, and military moves all suggest it is becoming more expansionist. If it pays no price for crushing Hong Kong, China might decide it can afford to use force to also take control of Taiwan.

A weak response to Chinese aggression against Hong Kong could make Chinese officials think they could move against Taiwan without facing serious consequences. This would be explosive.

With 24 million people, Taiwan is bigger than Florida. Since 1949, its government has been free from the Chinese Communist government in Beijing.

Taiwan has remained free because China has been deterred from using military power against it. The key ingredient to the deterrent has been the U.S. commitment to help Taiwan defend itself.

A weak response to Chinese aggression against Hong Kong could make Chinese officials think they could move against Taiwan without facing serious consequences. This would be explosive.

The U.S. is committed in law to the policy of aiding Taiwan’s defense. We supply arms to Taiwan and U.S. officials have warned for decades that China must not try to change Taiwan’s status by force.

If China attacked Taiwan, all of Asia would worry about where Chinese military power would strike next.

Our allies in South Korea, Japan, Australia, New Zealand, the Philippines and Thailand would question the integrity of U.S. security pledges and rightly fear for their safety. Few scenarios would be more dangerous to world peace.

Beyond the issues of Hong Kong and Taiwan, China is now conducting a vast “debt-trap” foreign policy designed to increase its control of countries throughout the developing world.

China is providing trillions of dollars in loans to countries that are unlikely to be able to repay them. The resulting defaults will increase China’s control of vital infrastructure in Asia, Africa, and even Latin America.

The United States has many common interests with China. We want China’s help with sanctions against the North Korean nuclear weapons program, for example. When I was U.S. ambassador to the United Nations we got that help, imposing the toughest international sanctions ever against North Korea.

Those sanctions are leverage that President Trump is using in direct talks with the North Koreans that we hope will end their nuclear threat.

President Trump is also right to demand better trade terms from the Chinese. That fight was always going to be tough, but it’s one that was long overdue.

However, the reality is that China’s leaders are committed to an ideology that cares a whole lot more about preserving and expanding their own Communist regime than about trade terms or North Korean nuclear weapons.

China might be willing to make concessions in the trade talks in return for some kind of U.S. “green light” to crush Hong Kong. But giving such a green light would be a dangerous mistake.

Though the U.S. cannot prevent China from suppressing the Hong Kong pro-democracy movement by force, it would be crucial that we impose substantial costs on China for doing so. That is what’s needed to preserve deterrence for Taiwan, and to preserve peace with China.

President Trump wisely invoked the 1989 Tiananmen Square massacre recently when talking about the impact that a Chinese attack on Hong Kong would have on U.S.-Chinese relations.

If China attacks Hong Kong, then business as usual with China must come to an end. The surer the Chinese are of that result, the less likely they are to attack, and the less risk there will be of military confrontation down the road.

In addition, such a Chinese attack would show the world once again the stark difference between how free counties and dictatorships operate. And that’s why Hong Kong matters.